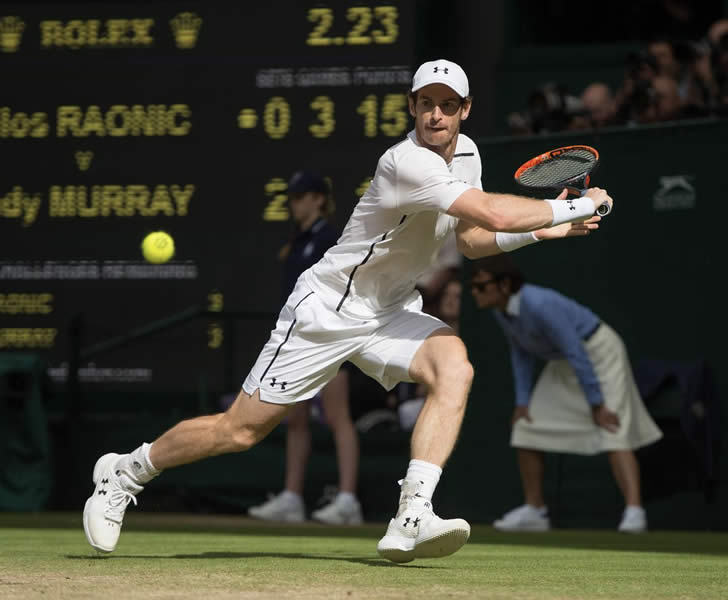 British No1 Andy Murray is into the round of 16 Photo: AELTC

Twelve months ago, Novak Djokovic led the rankings by a country mile, had been at the top for almost two and a half years, and arrived at Wimbledon as reigning champion at all four Majors.

All that was about to change: the exhausted Serb fell in the third round at a Major for the first time in seven years, and lost the No1 ranking to Murray at the end of the year, when he conceded the World Tour Finals crown to Murray.

Now, though, the boot is on the other foot. Murray looked as weary in the early stages of 2017 as Djokovic had done in the latter stages of 2016, was hit by shingles and an elbow injury, then a hip problem ahead of his title defence here.

After winning in Dubai, he missed Miami entirely, and lost early in Indian Wells, Monte Carlo, Madrid, Rome and even on the home turf of Queen’s, where he had dominated for years. And now his No1 ranking was up for grabs by two of the men who may have to beat if he is to retain his Wimbledon title: Rafael Nadal and Djokovic.

It may therefore be a good thing that Murray is not the superstitious type. For the beginning of Djokovic’s drift from the top came in the third round here and against the No28 seed, Sam Querrey.

And now Murray would also face the No28 seed, Fabio Fognini, in his attempt to make it past the third round. And the charismatic Italian had beaten Murray in three of their previous six matches, including their most recent in Rome this year—a 6-2, 6-4 trouncing.

But as Fognini said ahead of their seventh meeting:

“Here, it’s completely different. It’s Wimbledon, it’s home for him, is best-of-five. Of course, he’s the defending champion. So it’s going to be really tough, for sure. He’s the favourite. Nothing to say.

“But I think I have the game to play against him, to try to complicate his life on court… If I play like that, could be interesting.”

This time around, though, Murray was expecting Fognini to come out all guns blazing, and he held the Italian at bay for the first five games, broke him in the sixth, and again for the set, 6-2.

But in the second set, Fognini hit his stride and after a quick exchange of breaks, the Italian chipped and dropped and bamboozled another break for 3-2. Even the Italian’s serve was hitting a groove, and a swift love hold made it 5-3. With an hour and 10 minutes down, the Italian had the set, 6-4.

But as is often the pattern with Fognini, brilliance may be cancelled out by loss of focus and a clutch of wild shots, and Murray is not one to let an opening pass. Fognini still threw in some jaw-dropping points, carefree and careless, but the disciplined Murray broke in the fourth game, served big for 4-1, and after a break for some strapping to Fognini’s ankle, Murray broke to love, serving out the set, 6-1.

By the time the fourth set got under way, the court was packed, for as ticket holders left, their resold tickets were bought by late attenders, and there was not a space to be had. It was Friday night, with the clock heading to 9pm, and the atmosphere was electric—and all the while heightened by the unpredictability of Fognini.

This set had it all, swings in momentum, long patient rallies, fast and furious exchanges, and interventions by the umpire.

Both held to love, then with Fognini probing the Murray game in the fourth, the Italian gesticulated at a missed chance, was docked a point for ‘visible obscenity’, and lost the game, 2-2.

The crowd went into uproar. But if anything, it pricked him into greater inhibition, and he got his reward with a double fault from Murray on break point in the sixth game. Fognini held to love, 5-2, and it looked certain that this would go to a fifth set, and that the game would pause to close the roof as the dusk fell.

Fognini pulled off a drop-lob-volley combo to bring up the second of two break chances—set points—but Murray resisted. Fognini would have to serve it out, but with no challenges remaining, he stopped to check a call and had to concede the point, break and game. It was all square again.

Still Murray had to fight superbly to stave off another break point as a Fognini forehand whistled by. He levelled at 5-5, and with the crowd roaring him on to greater effort, Murray forced more errors from the Italian and broke one last time.

And the mark of a champion, and perhaps the champion in waiting too, Murray served out with a flourish: four winning serves to love, 7-5.

They must have heard the cheers at the top of the Shard, which can be seen on the horizon from Wimbledon. This was the match of the tournament thus far, a thrilling roller-coaster, and it carried the defending champion into the second week.

Murray admitted that he had not always played his best tennis, that Fognini is able to take him out of his rhythm, that he began to wonder if there would be a delay for light if he failed to win the fourth set, and that he now felt a bit sore.

But he and his ever-growing army of supporters know he will be back and fighting his heart out again on Monday, when he takes on Benoit Paire.

Shortly before Murray finished his 2hrs 39mins on court, his brother and partner Bruno Soares lost out in five sets and 3hrs 9mins not 100 metres away.

However, at the other end of the site, time was called on Jo-Wilfried Tsonga and Sam Querrey after almost three hours: they were on serve, 6-5, in the fifth set, but will have to conclude their battle tomorrow.