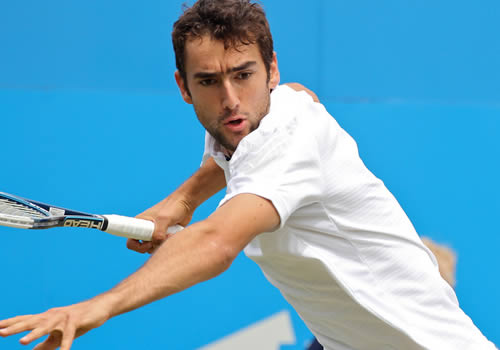 Marin Cilic is through to his first Wimbledon final Photo: Marianne Bevis

When Roger Federer referred to the other three men left in the semi-finals of this year’s Wimbledon, he could not resist talking about their formidable stature and hitting power.

His own 6ft 5in opponent, Tomas Berdych, was big enough. But 6ft 6in Marin Cilic and Sam Querrey were even more renowned for serving big, hitting big from the baseline, and hammering a smash if they found themselves at the net. The 6ft 1in Swiss put it thus:

“These other guys are all big hitters. I feel like they will have their say in the outcome of the matches. They’ve got big serves, big forehands, big hitters really. All three guys are taller and stronger than I am. I got to figure out a different way.”

The past matches between the ‘young’ duo, 29-year-old Querrey and 28-year-old Cilic, said it all. The Croat, one of the few men on the tour to have broken the “big four” stranglehold at Majors by winning the US Open in 2014—beating that smaller, illustrious opponent, Federer, in straight sets in the semis—had won all four previous matches.

But… those four involved seven tie-break sets. And all three matches played on grass had gone to the wire. The two played at Wimbledon were five-set marathons, the most recent going 17-15 in the fifth, the second longest singles match in Wimbledon history, lasting five and a half hours.

They had more in common than their heights, too. Both had broken new ground to reach the semis: Cilic was here at his 11th attempt, Querrey at his 10th attempt. Both had won the prestigious Queen’s title in the past, and both were very well liked. Just the day before, each was touted as “one of the nicest guys on the tour” by the likes of Paul Annacone to The Sport Review and by Kim Clijsters to the BBC. Not that such qualities made either a more likely winner, but ensured there was plenty of support and goodwill for both men.

And their match was almost as inseparable as all those factors anticipated.

Sure enough, the first set went to a tie-break: 36 points each, just four points dropped on their first serve each, not a double fault nor a break point in sight. But Querrey edged it, having made just three unforced errors, 7-6(6).

The second set, though, brought heightened intensity from Cilic, and he worked the first break point of the match in the opening game. Querrey held, continued to apply the pressure, and in the seventh game was rewarded with three break points. He took the second with a blistering backhand pass down the line. Two love holds and he had the set, 6-4.

There had been a distinct change in the serving figures. While Cilic was still almost flawless, Querrey had now won only 60 percent of his first serves. That small change had made a big difference.

The third set began in much the same way, Querrey on the back foot against the depth, power and variety of direction from Cilic. He fought off deuces and a break point in the first game, and two forehand errors helped Cilic break in the third. But the American broke straight back, a rare chance amid repeated love holds from the Croat. One such, punctuated by a 134mph ace, took it to another tie-break. This time, Cilic edged ahead from 3-3, serving it out with a volley, 7-6(3).

These surprisingly mobile men were chasing down everything, trying the occasional drop, and following their serve in, too, to break the patterns. There would still be nothing in it, as first Querrey broke, then Cilic levelled at 4-4.

It began to look certain that this too would go to a tie-break, but at the last moment, Querrey double faulted, netted a forehand, and Cilic had match points. The Croat made no mistake, firing a down-the-line winner to seal his place in the final at just three minutes short of three hours, 7-5.

He had one word as he came off court: “Unbelievable!”

The tall Croat had dropped just nine points in 78 first serves and not a one of the 19 in the final set. and he ended with 70 winners to 21 unforced errors.

The tennis he and Querrey had produced had drawn gasps of admiration, and was a great advertisement for big, old-school power grass tennis. The question was, would Berdych be able to deploy the same power against the seven-time champion Federer? Cilic could kick back and watch.