The teams for the inaugural Laver Cup this year have been announced, with Rafael Nadal and Roger Federer together in Team Europe 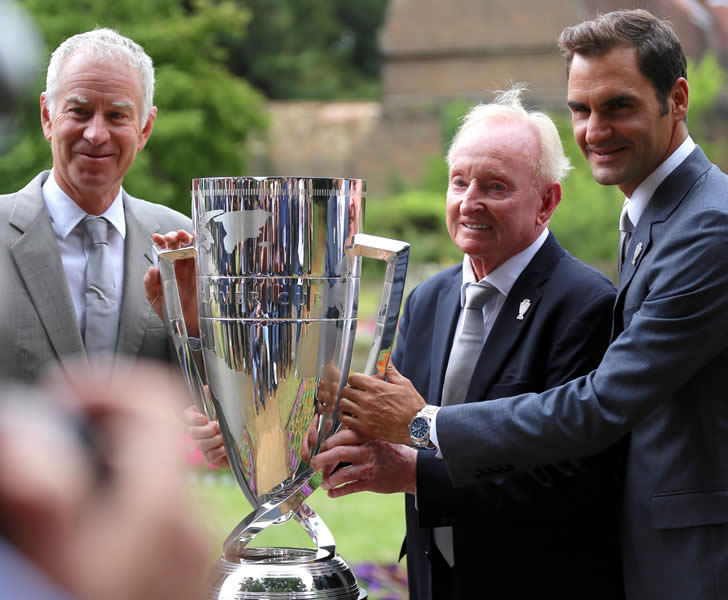 This week marks a particular alignment in the stars for tennis, as three of the sport’s biggest ever names celebrate their birthdays in the space of five days.

Roger Federer marked his 36th birthday on 8 August, and the man he supplanted for the most Major titles, Pete Sampras, will turn 46 on Saturday, 12 August.

Between the two of them is the venerable Rod Laver, a man who many still regard as perhaps the greatest of all time, a man who twice won the calendar Grand Slam, and would undoubtedly have won many more than 11 singles Majors had his career not spanned the transition from amateur to Open eras.

As it was, he had to earn his living on the pro circuit for over five years, during which he won eight of the Pro Slams and failed to reach the final only once in 15 of them.

Even so, Laver owns a record 200 titles, and continues to be both a friend and an inspiration to players today. And to mark the modest Australian’s legacy, Federer became the driving force behind an event in Laver’s name.

Thus the Laver Cup, a three-day event that pits a team of six of the best tennis players from Europe against six of their counterparts from the rest of the world, was conceived.

Appropriate, then, that the final names on the roster for each team should be announced on Laver’s birthday: the great man turned 79 today, 9 August.

World No6 Marin Cilic is to join Federer, Rafael Nadal and Dominic Thiem in a European squad captained by Bjorn Borg, while Sam Querrey will line up with a world team comprising Milos Raonic, Jack Sock and John Isner under the captaincy of John McEnroe.

Cilic’s impressive resume includes the 2014 US Open title, and he is also one of Croatia’s most decorated Davis Cup players, having played 20 ties since his debut in 2006 and leading his nation into last year’s final.

He reached his first Wimbledon final last month and now looks forward to joining the man who beat him to the title, Federer, when they unite to represent Team Europe.

“I know how well Roger is playing this season, so it will be nice to be on the same team in Prague,” Cilic said.

“To be part of the first Laver Cup is really exciting and something I am looking forward to it—a huge honour for me.”

Borg said: “Team Europe has assembled a powerhouse team and I could not be more thrilled. Marin is enjoying his most consistent season yet, adding even more depth to our line-up.”

Querrey’s inclusion in McEnroe’s squad follows a fine 2017 season and he continues to go from strength to strength. The 29-year-old won his 10th title in Los Cabos last week, reached his first Grand Slam semi-final at Wimbledon last month, and defeated Team Europe rivals Nadal and Thiem to win the title in Acapulco in March.
The American said: “Beating four top-20 players to win Acapulco and making the Wimbledon semis have been new highs for me. It has been a fun season so far and now I can’t wait to be part of the Laver Cup too.”

McEnroe added: “Team Europe might have three Grand Slam champions, but Team World has four of the biggest servers in the world.

“Sam is a dangerous player who has twice upset the world No1 at Wimbledon in the past two years, so he brings a big game.”
The Laver Cup will be played on a single court at the O₂ arena in Prague, 22-24 September, in a mix of singles and doubles matches. The location will then rotate between major cities in Europe and the rest of the world each year, with the 2018 edition place in the United States.

Traditionally ‘English’ sports could be changed by new ‘smart technology’