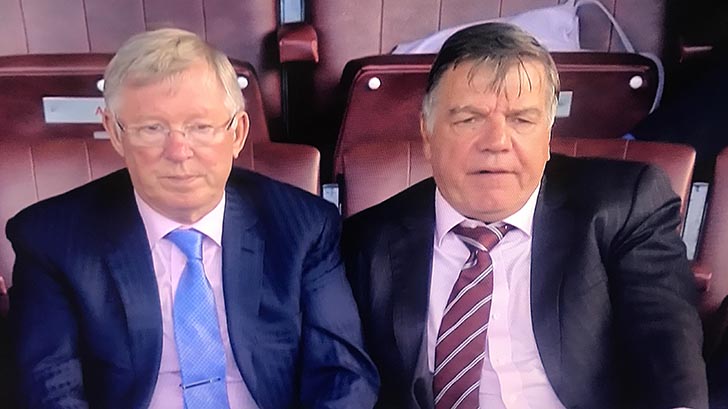 Sir Alex Ferguson was sat in the stands at Old Trafford alongside Sam Allardyce for Manchester United’s 2-0 win against Leicester City on Saturday evening.

Manchester United signing Paul Pogba peppered Kasper Schmeichel’s goal with a number of long-range efforts in the first half before Juan Mata had a goal ruled out for offside.

Former Red Devils defender Danny Simpson conceded a 51st-minute penalty for handball at Old Trafford but Lukaku’s spot-kick was saved as the Belgian forward missed the chance to score in his third successive Premier League game.

However, substitute Marcus Rashford spared his strike partner’s blushes with a clinical finish from Henrikh Mkhitaryan’s corner to break the deadlock in the 70th minute.

Marouane Fellaini deflected Jesse Lingard’s cross past Schmeichel to extend the home side’s lead and cement three points for the home side.

And Ferguson watched the Premier League clash in the company of former England and West Ham manager Allardyce (in the photo above) for the Red Devils’s 2-0 win against Leicester.

The Red Devils followed up their impressive start with a 4-0 victory over Swansea City at the Liberty Stadium last weekend.