“I’ve been so lucky to be with such good players but also really good people," he tells Marianne Bevis 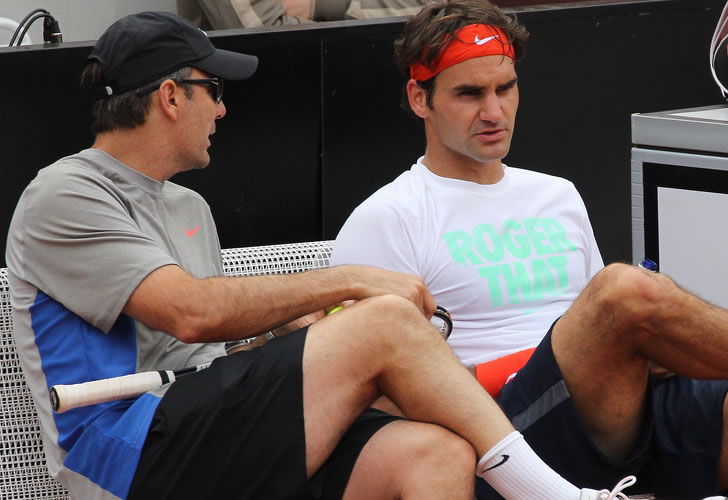 It is the kind of comment that litters a conversation at Wimbledon last month with one of the best known coaches in tennis, Paul Annacone.

The American, whose autobiography “Coaching for Life” came out a fortnight ago, has guided the likes of Pete Sampras and Roger Federer through some of their most memorable achievements, and has also been called upon by the LTA, Stan Wawrinka and Sloane Stephens.

Yet it was a career move that may never have happened were it not for an unhappy turn of events at the start of 1995. That, then, was where our conversation began.

Annacone was nearing the end of his own tennis career, one that spanned 14 years, took in three titles—including a quarter-final run at Wimbledon—and considerable success in doubles—a French Open title and the final at the US Open—to reach a singles ranking of No12. He even claimed victory over a teenage Sampras in their only meeting, on the grass of Queen’s in 1989.

But during the Australian Open of 1995, Sampras’s coach, Tim Gullikson, was taken ill. Annacone takes up the story.

“I had coached a few players as I was kind of filtering out of my playing days, so I went from coaching good players to kind of accidentally coaching one of the greatest ever.

“They realised [Gullikson] had a brain tumour, so had to get rushed back to the States. I was playing there at the time, and they asked would I just stay and help out, so Tim went home and I stayed with Pete. Tim tutored me through phone calls, and Pete was very candid about how to operate things in his environment.

“When they realised Tim was going to be fighting for a while, Pete said would I stay on. And then I actually herniated a disc around then, so couldn’t play. But it was all about Tim trying to get healthy and me trying not to mess things up.

“Sadly, Tim fought his battle for a year and a half and then passed, and I just stayed on, so it wasn’t the happiest way to be inaugurated… But there were a bunch titles that were pretty important, and that was good medicine for both Tim and me.”

From Henman to Federer

Sampras’s last hoorah came in a glorious fifth US Open title—a then record 14th Major: He would not play again. But Annacone was now a man in demand, and along with some player development with the USTA and later the LTA, he joined up with Tim Henman.

“Tim said, look I’m older now, I really don’t want someone 30-35 weeks, but would you be interested in travelling 16-20? So we got together, and that was a great four years.”

It was also fruitful: Henman won his first Masters title, went deeper at the French and US Opens than ever before, and achieved his highest year-end ranking, No6.”

So come 2010, when Federer was casting around for the ‘x-factor’ to carry him forward from a special 2009—the Swiss had won his first French Open, and then a record 15th Major at Wimbledon—Annacone was an obvious choice.

It may have helped that Sampras was one of Federer’s idols, and that Henman had become a good friend. Indeed, the Brit and the Swiss had notched up 12 matches during the eight years that their careers overlapped—with Henman winning the first six. But although Annacone’s credentials spoke volumes, Federer did his own homework.

“Roger reached out and asked if I would be interested in coming to Switzerland and spending a little time to see how we got along. So I went for a training block, and he just said he’d like that I coach him.”

“And the one thing that really impressed me about Roger—and same with Pete and Tim—it’s always nice to have the goals, but you have to have the foundation. For everything Roger had achieved, he was like, I want to win another Major and I’d like to be No1, but I want to put the blueprint together based on what you and I think to give myself the best chance to get there.”

“And three years later he achieved that, won Wimbledon 2012, got the No1 ranking back, and after almost four years, we ended our time together very, very amicably.”

Reclaimed No1 after Wimbledon 2012

What stood out in each of Annacone’s on-court partnerships was their unfussy, understated interaction. Sampras and Henman, like Federer now, went about their business on court in a quietly matter-of-fact style, a style replicated in practice.

And it proved to be a style and an attitude that built friendships, as illustrated by Annacone’s description of Federer’s transition in 2013.

“I think if you’re pragmatic and you have good communications with the player, unless there is a huge philosophical disagreement or the player doesn’t work, or the coach is bull-headed, you can figure ways out of these things—a natural exit. And that’s how it was with Roger… I said I’ll stick around as long as you like. And he said that’s great, we’ll just keep talking. Then he thought about having Stefan [Edberg] help… I said that’s great, Stefan has been there and done so many things you’ve done.

“But the biggest thing was he had the glue of Severin Luthi. Severin doesn’t get enough credit: he was absolutely instrumental in helping my transition to getting comfortable, knowing the best way to deliver messages to Roger, how things operated around the court and off the court, and that was really helpful. So when Roger thought about Stefan, even if he could only do 10-12 weeks, that’s great—Severin’s there too. And it’s not like [Roger’s] 18 years old and needs someone to hold his hand 24 hours a day.”

Yes, pragmatism; yes, a knowledge of the sport from the inside; yet something more besides: Annacone has an understanding of the kind of physical and mental pressures faced in the unforgiving spotlight of individual competition.

“It’s a hard business to separate yourself from and not weigh yourself by everything the player does, but I’ve been so lucky to be with such good players but also really good people, and that’s helped me understand the landscape.

“So it’s been an enjoyable coaching journey and now the majority of what I’m doing is TV stuff, and I really love that because I get to live this, and get to see all these great battles between the best players in the world. So I still feel part of it—don’t have to sit there sweating in the player box!”

Now his acute observation, married to such experience, are being mined in that new role—and also before the mic went off on that sunny Wimbledon morning. And as the last Major rears its head in New York, here are a few timely questions and answers.

Can Federer reclaim the No1 ranking?

“I think he very likely could. For him, it’s a by-product, and that’s probably why he could, because he’s not worried about it. But I would also say I don’t think he’ll risk his health to play one extra tournament to make sure he’s No1. Pete was like this at the end of his career too. He’d let go of things. He’d say ‘I don’t care where I’m ranked, I want to make sure I give myself the best chance of winning Wimbledon or the US Open.’

“Which is why, other than the magic Roger shows us, I look at how he manages his career and how pragmatic he’s been about trying to adapt. ‘I need a break? OK, I’ll take a break.’ He’s very good about making decisions without panicking… and that’s really hard as a competitor to step back and all of a sudden see this guy wins that tournament, that guy wins this tournament.”

How should Andy Murray approach the rest of the year?

“Andy’s been battling a hip, he’s had the back stuff, and he works so hard that sometimes I wonder if he over-trains. He leaves no stone unturned, and also Andy’s coming off a miraculous end of last year. At the time it doesn’t seem to take anything out of you, but what you don’t know is what it does the next 12 to 18 months.

“And Andy’s very competitive and wants to be out there playing… it’s just human nature… and that’s great because he has that passion. But you have to trust the process and let the cumulative results tell you if you are doing the right things.

“One of the things that amazes me about great players is their ability to let the process lead to the result, and right now Andy’s going through a different environment, and he’s so intense and so passionate and so driven and so competitive that I think he needs to make a little bit of an adjustment, mostly just to take pressure off himself.” 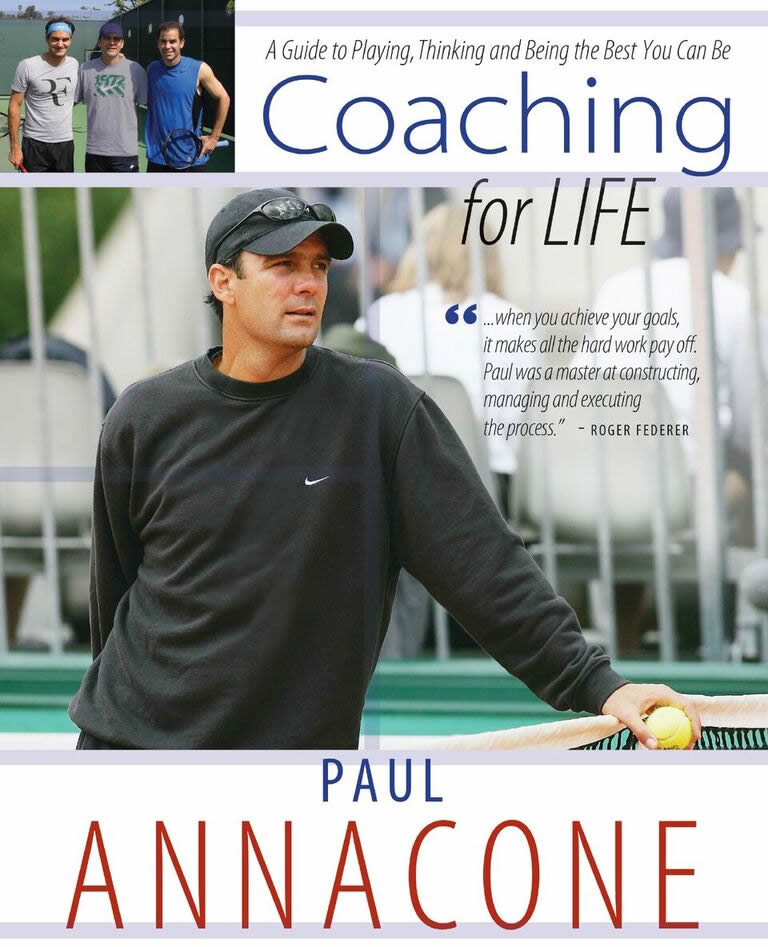 Coaching for Life, published by IRIE Books, is now on sale Photo: Handout

Who among the new generation will first challenge for a Major?

“Dominic Thiem and Sascha Zverev are the two most well rounded. I think Kyrgios is the most gifted but the least able to consistently manage his environment still. So Nick could always come and win one of these in two weeks but his issue is going to be about can he sustain it, does he want to sustain it and does he know what that means.

“Whereas Sascha and Dominic understand that… this is what I need to do to get the most out of myself even though they have a little bit less talent than Nick, they are closer in the other boxes that need to be ticked. I think they are marginally closer to holding a [Major] trophy than Nick.”

Coaching for Life, published by IRIE Books, is now on sale, and will also be available during book-signing events at the US Open.