US Open 2017: Champions Nadal and Federer thrill fans with first step to No1 showdown 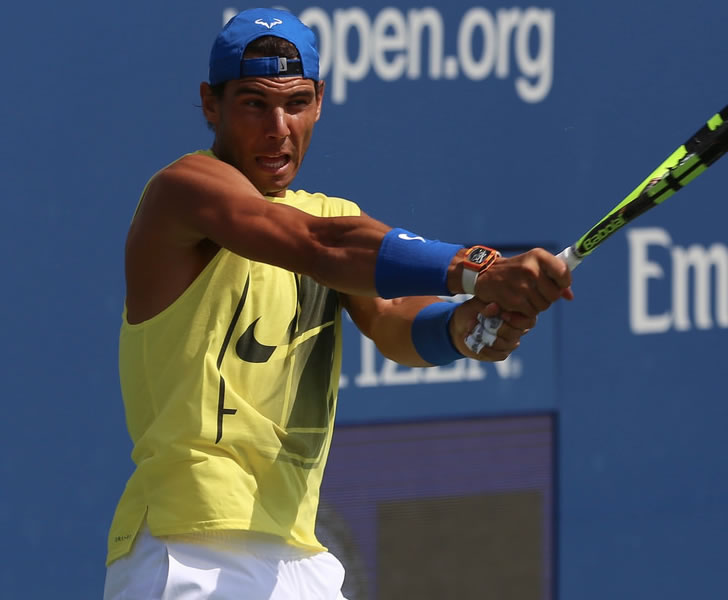 Rafael Nadal is the top seed at the US Open in New York Photo: Marianne Bevis

One might be forgiven for anticipating an air of gloom over proceedings at this year’s US Open. After all, both men’s finalists from last year, Stan Wawrinka and Novak Djokovic, had withdrawn not just from the tournament but the rest of the year.

Djokovic, indeed, had won this title twice from seven finals. He is tied fourth on the all-time list of Major singles titles—and second in Major match-wins. His absence in New York for the first time since his debut in 2005, then, left a big hole.

Andy Murray, champion in 2012 and finalist in 2008, was forced to pull from the draw for the first time since 2005. And another previous finalist, Kei Nishikori, was also absent with injury.

That left just four from only eight active men who had reached the final in New York, dating back to 2004.

But there has been little sense of gloom at Flushing Meadows this year, because the battle for the No1 ranking that took off after New York this time last year between Djokovic and Murray has been replaced by an equally compelling showdown between one of the oldest rivalries on the tour: Rafael Nadal and Roger Federer.

Between them, these two, age 31 and 36 respectively, have won seven US Open titles and played in three more finals.

Along the way, Juan Martin del Potro and Marin Cilic burst past the ‘big four’ to seal their own piece of history, their solitary Majors thus far, but make no mistake: It has been the charismatic presence of the Spaniard and the Swiss that has stolen the spotlight, not least because of their backstory over the last 12 months.

Both missed long sections of 2016 to heal injuries. After knee surgery at the start of the year, Federer played no more part in the season after Wimbledon, and missed his first US Open since 2000. Nadal withdrew from the third round of the French Open with a wrist injury, returned for the Olympics, and won just six more matches in the year.

But come 2017, come the reinvigorated and rested former No1s and US Open champions, who cut a swathe through the season to win all three Majors plus four Masters titles—and another ATP 500 title apiece.

New York, then, was abuzz as this rivalry, already 37 matches old, shaped up to determine the No1 ranking in their first ever contest at the US Open. They were drawn in the same half, could meet in the semis, and if they did, the winner would seal No1.

In the short-term, though, Federer had to target the quarter-finals to keep alive his chances—the semi-finals if Nadal won his first match—and in the immediate term, both would begin their long road to that convergence on what was, in fact, a very gloomy day the Open. The rain began at midday, and by 3.30, the entire schedule had been cancelled—except those under the Ashe roof.

It was Nadal who began the charge against a single-handed Serb ranked 85, Dusan Lajovic, who had won just four games in their only previous meeting. That was on clay in 2014, but New York was hard—and Nadal had not won a hard-court title since.

But while his hard-court prowess played second fiddle to his clay achievements, Nadal was, of course, a finalist at this year’s Australian Open, twice a champion here, and had won over 400 matches on hard courts. Even so, the first set of his match proved to be a real test, and Lajovic made an early strike against serve in the third game.

The Serb served for the set at 5-4, but Nadal is never more pugnacious than when his back is to the wall, and he delivered a hammer blow, a break to love, to level: It would go to a tie-break and to Nadal, 7-6(6), after 64 minutes.

Now Nadal opened clear water with relative ease. In both subsequent sets, he broke in the first game, and then broke again, and aside from a brief lapse in fourth game of the second set to give one break back, he compensated immediately, and would serve out both sets, 6-2, in a little over half an hour apiece.

Perfectionist that he is, Nadal was quick to point out:

“I need to keep improving. The first round is never easy, and always at the beginning you want to do well. But I feel a lot of support here from the crowd, so thanks. Year by year, it is a pleasure to be back.”

The crowd, as it always does with this superstar of tennis, cheered. Now it was up to Federer to keep his side of the bargain in the night session.

The Swiss had lost just three matches in 38 this year and kept his body ticking over nicely with a careful schedule of just eight tournaments. But since reaching the final in Montreal, he had nursed a back problem—a recurrent weakness in his career.

And his young, athletic opponent, 19-year-old American Frances Tiafoe, had reached No60 after Wimbledon courtesy of two Challenger titles, qualifying for both the Australian Open and Miami Masters and making the second round of both, and then reaching the third round in Cincinnati—beating No7 Alexander Zverev into the bargain.

He had played Federer, too, and taken the Swiss to a first-set tie-breaker. With the backing of the 20,000 in Arthur Ashe, what could he achieve here?

Well for a start, the bulk of those 20,000 were not favouring Tiafoe, but they were clearly impressed by what they saw: huge cuts on the forehand, huge pace on the serve. And Federer was rusty, made errors, and was broken in the first game.

The Swiss serve was also failing to find its groove, and the shot that had been such a revelation when he returned at the start of 2017, his power backhand, found the net time and again. Was this back trouble? It had all the signs of being so, but Tiafoe was on fire, too, pounding the ball through the court.

Federer certainly could not break back, and after 36 minutes, Tiafoe had the set, 6-4. Then the momentum swung. Now Federer seemed looser, Tiafoe tighter, and the Swiss broke in the fourth game, aced to hold his next two serves, and broke again, 6-2.

Federer accelerated through the third set with his serve and backhand now flowing and destructive. There were some crackerjack rallies to thrill the crowd, but it was becoming one-way traffic—a love hold followed by a break and the Swiss served it out, 6-1.

But there would be another twist: The fourth set saw a recapitulation of the first, with Tiafoe returning to his blistering form, going on the attack, and leaving Federer flat-footed. The American broke in fourth game, and again in the sixth, and served out the set to rapturous applause, 6-1, after exactly two hours.

The final set melded the match so far, first Federer firing up for a break, only to be broken when he served for the match as Tiafoe fired up again. It was exhilarating, with enough noise to raise the closed roof.

But it was not to be for Tiafoe: Federer would not yield, stepped in with aggressive returns, and got his reward: One final break, 6-4.

Federer knew he had squeaked by, but he apparently loved every minute of it:

“It was exciting, it’s why I came to New York, to go through these emotions. I had a bit of a slow start, I’ve had a back problem, but eventually I was able to let go…

“It was a cool experience… a privilege to be here to celebrate Arthur Ashe’s 20 years—basically when I first came here. So thank you!”

But as he concluded, Tiafoe played superbly: “He has a great future.”

Of that there is no doubt, but Federer is still today’s man—certainly at this this witching hour in New York anyway.

US Open 2017: Roger Federer and the power of positive thinking: ‘The unknown is the exciting bit’