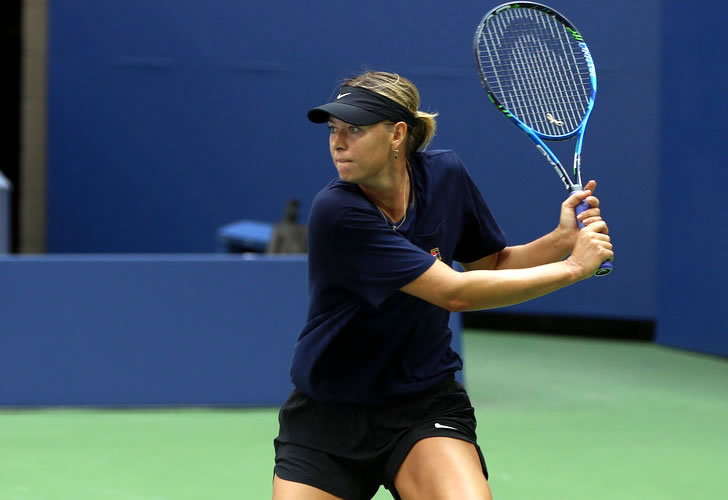 It was the talk of the US Open draw ceremony from the very first.

World No2 Simona Halep has been challenging for the No1 ranking against a slew of women since the start of the clay swing, and finally the US Open looked like her chance to succeed. After all, she trailed Karolina Pliskova by just five points, and the tall Czech had to forego runner-up points at this year’s US Open.

The French Open title would have been enough for Halep: she finished runner-up. She had another bite of the cherry in Eastbourne—but lost to Caroline Wozniacki.

A semi finish at Wimbledon would have worked: she lost in the quarters to Johanna Konta. Then in Cincinnati, the title would have sealed it: she was runner-up to Garbine Muguruza.

Now, on the live rankings at least, the promise was there: She was ahead of Muguruza, Elina Svitolina, Pliskova, Wozniacki, Konta, Svetlana Kuznetsova and Venus Williams. All the rest had to go deep into the draw to keep their chances alive, and the last four had to win the title.

But the reason for the buzz at the draw ceremony was the name pulled out of the hat for Halep’s first round. It was wild card and former US champion, Maria Sharapova.

What’s more, the Russian had won all six of their previous matches. The only saving grace, as far as Halep was concerned, was that Sharapova had suffered injury problems since her return from a doping ban in April.

She retired in the second round of Rome, returned in Stanford in July, but retired after her opener. She had not played since—one hardcourt match since the Australian Open in 2016. But even so, she promised to be a formidable impediment to the Romanian’s No1 ambitions.

Halep played it cool, though she must have felt that the tennis gods were conspiring:

“My reaction [when I heard] was normal, because this year I had very tough draws every time almost. Of course, was a little bit, like, ‘How is possible again, just first round of a Grand Slam?’ But I felt OK. I did my practice normally.”

It was quickly clear that this would be a long and intense battle as both pressed for a break early. Sharapova defended break point and three deuces in the third game, before Halep was forced into some stunning defence in a long fourth game and four break points. One final ripping return-of-serve winner from the former champion got the break, 3-1, after almost half an hour of play, but that was just the start.

The next three games brought three more breaks, and Halep survived one more attempt to hold for 4-4. But Sharapova was warming to her task, hitting strong and flat from the baseline in a relentless barrage. And it earned her one more break for the set, 6-4.

That had taken an hour, and the second set would be just as long. Sharapova looked sure to race to victory, breaking in the fourth game and facing down a break-back point in the fifth. But Halep was rewarded for some gutsy and aggressive play, and also great athleticism in defence. She broke to love, levelled for 4-4, and broke again.

She would then have to face down five break points, and repeated winners off her too-frequent second serve, but hold she did for the set, 6-4.

Sharapova returned from a break off court refreshed, and stormed to a 3-0 lead, and although Halep dug deep to live with the pace and power, she could not get that vital break back. Sharapova served it out, 6-3, having fired 60 winners in pursuit of her first Major match-win in 19 months.

Next in line for that No1 ranking, Wimbledon champion Muguruza, sailed through the first round against the No64-ranked Varvara Lepchenko, 6-0, 6-3, dropping not a point on serve in the first set and making only three unforced errors.

Muguruza’s confidence since her Wimbledon victory has gone sky-high. Indeed, it was a launch-pad to one of her biggest tour titles in Cincinnati, evidence that she must now be one of the main contenders for the title in New York.

It was a significant day for two-time US Open finalist, Wozniacki, as well. The No5 seed beat 29-year-old Mihaela Buzarnescu, who was making her first main-draw appearance in a Major. The Dane’s 6-1, 7-5, win was her 100th at a Major, just the 10th active player to reach that milestone, but it sets a difficult second-round match Ekaterina Makarova. Beyond that lies either Carla Suarez Navarro or No29 seed Mirjana Lucic-Baroni.

No13 seed Petra Kvitova may not be in the frame for No1 at the moment, but she has her own remarkable story to tell. After a knife attack on her playing hand last December, the former Wimbledon champion was unsure whether she would ever play again, but she returned to play her first match at Roland Garros—a win—went on to title in Birmingham, and picked up a few match-wins on the hard-courts before making it to the US Open.

She too had a tough opener against the 2008 finalist, Jelena Jankovic, who had won their last meeting, and on Kvitova’s favourite grass at Wimbledon. Here, though, the Czech took an early lead, Jankovic broke back, but Kvitova broke again for the 44-minute opening set, 7-5. She then gave up an early lead in the second set, and the Serb had the chance to serve out the set at 5-4, but more errors let her down, and Kvitova reeled off the next three games for a compelling 7-5 victory.

But while talking of remarkable achievements, mention has to be made of another colossus of the game who is also in this tough Kvitova/Muguruza/Wozniacki quarter.

Venus Williams, at the age of 37, has been one of the top performers this year—indeed the only woman to reach two Major finals so far. Now she was back where she first shone at her brightest. Twenty years ago, Williams was runner-up in her first US Open, and would put together a stunning run to two semis, two titles and another runner-up place in consecutive years.

With her sister Serena currently off the tour, Venus has more Majors than any other woman in the field, seven from 16 finals. She is playing in her 76th Major—an Open record—and her 19th US Open, the oldest woman in the draw. And by the end of her first day here, she had reached the second round once again, via a demanding 6-3, 3-6, 6-2 victory over 19-year-old qualifier Viktoria Kuzmova.

Elsewhere in the Sharapova quarter, which was exited by Johanna Konta earlier in the day, there were also wins for Ashleigh Barty, Julia Goerges, Sloane Stephens, Donna Vekic, and Timea Babos—Sharapova’s next opponent. Finally, and within minutes of Sharapova’s victory, No11 seed Dominika Cibulkova added her name to the second round.

But the last word goes to the star of the night—dressed appropriately in a Swarovski-studded black dress inspired by the one Sharapova wore in victory in 2006.

She was asked on court what she had learned about herself on this return to the stage where she has now won all 18 matches played at night. It was revealing:

“That behind these Swarovski crystals and this little black dress, this girl has a lot of grit and she’s not going anywhere.”