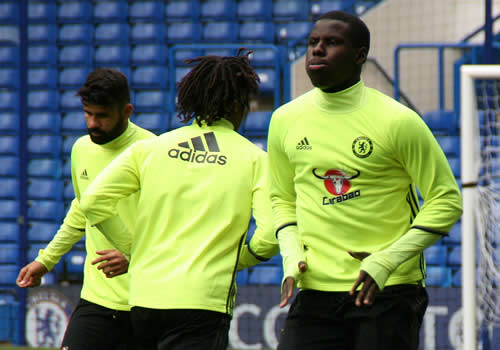 Kurt Zouma has told his Chelsea team-mates that Stoke City are out to beat Antonio Conte’s men when the Blues travel to the bet365 Stadium on Saturday.

The west London side are preparing to take on the Potters as they look to get back to winning ways in the Premier League following their goalless draw with Arsenal at Stamford Bridge last weekend.

Zouma is on loan at Stoke this season from Chelsea after he was deemed to be surplus to requirements at Stamford Bridge by Antonio Conte.

The French defender will not be able to play for Stoke against his parent club this weekend, but the centre-half has admitted that he is desperate to see the Potters claim the three points against the Blues.

“I’m very happy because I play a lot of games, but I can’t be happy if we lose.

“I am only happy if the team is winning and doing well.

“Personally, I am happy at Stoke, but I want to be extra happy because we are winning games and that’s why I am working hard.”

Chelsea warmed up for the game with a 5-1 victory over Nottingham Forest in the League Cup third round on Wednesday night.

The Blues are aiming to defend their Premier League title this season while also launching a bid to win the Champions League.

Conte’s side return to Champions League action next week when the west London team travel to Spain to take on Atletico Madrid in their next group game.

Arsene Wenger told not to start Alexis Sanchez for Arsenal