The draw has been made for the inaugural 2017 Laver Cup in Prague, with the likes of Roger Federer, Tomas Berdych and Rafael Nadal in action

The format is simple, but the permutations are complex. And as the players for the first four matches of the Laver Cup were announced in an echoing O2 arena in Prague this afternoon, the big question was: When, and if, Roger Federer and Rafael Nadal may at last join forces in doubles?

During the next three days, six players from Europe and six from the rest of the world will take on each other in three singles and one doubles match each day—with one point available for each match on Friday, two for each on Saturday, and three for each on Sunday.

The first team to 13 wins the Cup, so if one team makes a clean sweep through Friday and Saturday, they could clinch the trophy with an opening win on Sunday. Never fear: an extra exhibition match will take up the slack!

However, the opposing team could level the score at 12-12 if they win all four of Sunday’s matches. And then a doubles set will be played to determine the winner.

Add into the equation that each man must play at least one singles match during the first two days, but none can play singles more than twice over the whole three days, while at least four of the team must play a doubles match, and the draw that was revealed on Friday left a lot of unanswered questions.

When and how often would Federer, whose brainchild this event has been, play? For as MC Todd Woodbridge put it, the Swiss was the “highest-ranked bench-sitter we’ve ever seen” on the opening day.

And when would world No1 Nadal be unleashed in a singles match? According to the rules, both will have to play singles on Saturday, and perhaps join up for doubles—though that highly-anticipated treat may be reserved for Sunday.

Also kicking his heels on the World bench will be Sam Querrey, who is the ‘away’ team’s highest ranked player at No16, and perhaps therein, perhaps, lies the clue. Both captains, Bjorn Borg and John McEnroe, may have decided to keep their powder dry for the more valuable points of Saturday.

It’s all part of the intrigue of this competition: tactics not just on the court but off it. For a start, the draw for Saturday and Sunday will not be ‘blind’ for both captains. Borg has the opportunity to see McEnroe’s hand before showing his own on one day—the cool Swede chooses.

But first things first. What can the crowds expect on the first ever day of Laver Cup competition?

Cilic is fresh from winning two Davis Cup matches last week—fresh, because he did not play the arduous weeks between reaching the final of Wimbledon and just three rounds at the US Open. He has never played the impressive and fast-improving teenage Tiafoe, but will be very aware of the test he posed Federer in the opening round at the US Open. 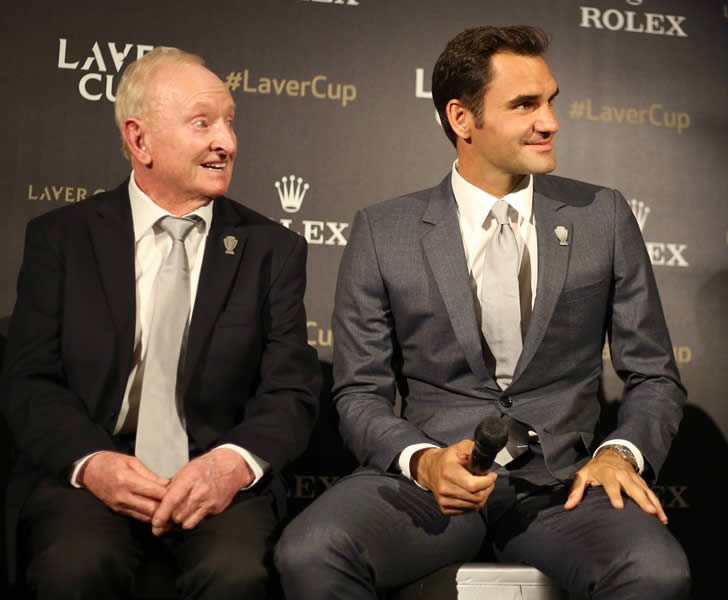 Roger Federer is among the stars in action at the first ever Laver Cup Photo: Marianne Bevis

The nimble and resilient Austrian world No7, Thiem, will provide a vivid contrast to the tall No17 Isner, who is one of the sport’s most prolific server of aces. They have shared their two previous matches, but those were back in 2015.

Since then, Thiem has established himself in the top 10 with semi-final runs at the French Open and eight titles. However, Isner has won two titles since Wimbledon and reached the semis in Cincinnati.

The night session brings an intriguing contest against two of #NextGen’s biggest stars, Nos 1 and 4 in the Race to Milan.

Zverev beat the teenage Canadian in the semis of the Montreal Masters, so the fast-rising Shapovalov is hoping for revenge, and his form suggests he could get it. He made a break-out run through qualifying to reach the fourth round of the US Open and went on to clinch two wins in Davis Cup last week.

In contrast, since winning the title in Montreal, Zverev has won just one match. Reason enough for Shapovalov to feel confident:

“I’m ready to get some revenge on this guy. He’s an incredible player so it’s going to be tough, but I’m excited for it.”

It promises to be the contest of the day, in a match-up that may become as big a rivalry in the years to come as was that between their captains. Borg and McEnroe ended their careers with seven wins apiece.

Perhaps the most unexpected reveal was the partnering of Nadal with home favourite Berdych, while Kyrgios and Sock, both enthusiastic doubles players, should be a match made in heaven. They get on like a house on fire, Kyrgios explained afterwards, and got in lots of practice together on the court here later this afternoon.

What is more, Kyrgios is loving the team spirit here, and brimming with confidence:

“[Nadal] is obviously playing pretty easy and is in pretty good form… [But] I think anyone on this team on a certain day can beat him, especially on a surface like this. Everyone on our team has got a big serve, plays big. That type of tennis is pretty dangerous to beat Rafa.”

Nadal admitted that Europe was looking for crowd support:

“We hope to play well: It’ll be the first time that we’ve played together. And here we are, in the hometown of Tomas, so it’s going to be exciting.”

However, he balked at the suggestion that this was akin to an exhibition event.

Federer will be there to lend his support, too, in a non-playing role. He added:

“Friday looks really amazing,” he said. “I can’t wait to start on Saturday as well, but tomorrow I’ll be the big supporter.”

No doubt Rod Laver himself will lend his enthusiasm to proceedings: He has promised to be in attendance for every session. However, asked if he had a favourite team, he perhaps surprised:

“Maybe I should take the newcomers.”

He referred to Team World, which is up against three Major champions, three men with decades of experience—well over 30 years old—and two of them currently topping the rankings after winning all four Majors between them.

Maybe it helped that ‘the newcomers’ included not just two exciting teenagers—“It’s good to have a new group coming up”—but because the only Aussie, Kyrgios, is putting himself out there just days after attempting to do the same in the Davis Cup.

Ever the gentleman, though, Rod Laver, is sure to heap praise on every single man.

Laver Cup 2017: McEnroe and Borg, Federer and Nadal get show on the road in Prague