Laver Cup 2017: McEnroe and Borg, Federer and Nadal get show on the road in Prague

The stage is set for the inaugural Laver Cup, with the likes of Roger Federer and Rafael Nadal in action in Prague 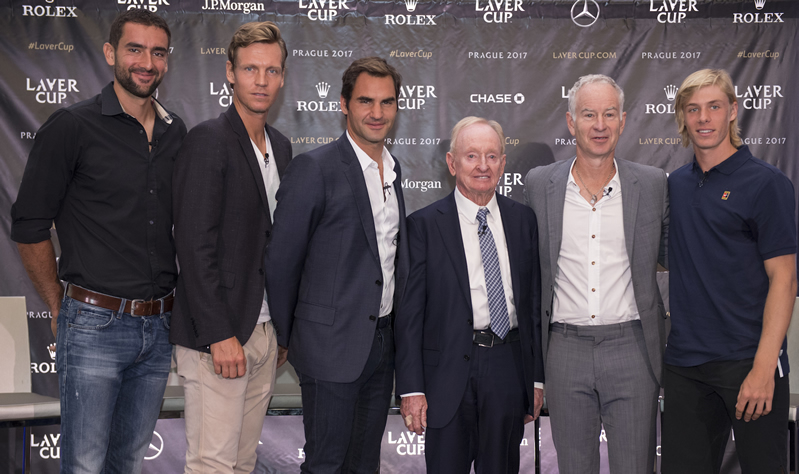 “Both teams will fight their heart out to get their hands on it.” Roger Federer

They looked dapper to a man, and so they should. Some of the best players in the world have descended on the gorgeous city of Prague to inaugurate the newest tennis event in the calendar, the Laver Cup.

Two teams, headed by Bjorn Borg for team Europe and John McEnroe for Team World, arrived in a fleet of Mercedes-Benz—fashionably late, as it happens—that did a circuit around a dais that had been erected on the cobbles of Old Town Square, before returning to unload their cargo.

First in line was the Laver Cup itself: special for its design, still more special for what it represents.

The silver trophy was unveiled just before Wimbledon, along with an explanation from the man who brought all this about, Roger Federer.

The modest Laver won 11 singles Majors and nine in doubles, and would have won many more had the tennis tour not split into professional and amateur branches during the 1960s when the Australian was at his peak. He won his first calendar Grand Slam in 1962, then completed a second after tennis finally went ‘Open’ in 1969, and in between, he won eight Pro Majors from 14 finals, along with five Davis Cups in a span of 15 years.

Even so, Laver has, from the first, clearly been hugely touched by the gesture of his fellow legends:

“I’m just totally in awe in many ways to think that Roger and his crew put this together, and to put my name on the trophy is a legacy I will remember for ever.”

He decided, therefore, to contribute something special of his own: one of his silver trophies, which has been melted down and physically incorporated into the new trophy.

“Back in the 60s, the US Professional Tournament had a big bowl, and they retired it because I won it four times! And so it was fitting that that particular trophy should continue on and be mixed with this trophy. It was a thrill that the trophy could be continued.”

And make no mistake: the actual Cup is special:

• Made by silversmiths Thomas Lyte, who are also responsible for Ryder Cup and FA Cup

For Federer and the rest, though, this trophy has become something more than a work of art. He explained:

“When you win a title that the great Rod Laver also won, it’s wonderful to know that you’ve shared in those same experiences and that same legacy.

“But the Laver Cup is even more magical. It would be a tremendous privilege to lift a trophy that features a real part of Rod’s incredible history. Both teams in Prague will fight their heart out to get their hands on it.”

So, with the Cup itself set centre stage, “Roger and his crew” followed Laver to the platform way above the thousands of fans. And, yes, dapper to a man: All suited and booted in grey or blue, white shirts, no ties—Team Europe with a touch of blue silk, Team World with a sliver of red showing from their breast pockets.

All of them except Laver, who kept up the tradition of a tie, carefully blending red and blue! But he continued to look like a man who cannot believe his luck, like a kid in a candy store. He intended, he said, to be courtside for every session.

There have been a few changes and reveals since the last nominations were made a week ago. Juan Martin del Potro had to withdraw with injury, to be replaced by Frances Tiafoe, another big-hitting American to join compatriots John Isner, Sam Querrey and Jack Sock.

Tiafoe pressed Federer to five hard sets in the first round of the US Open just three weeks ago, was edged by Thanasi Kokkinakis—who joins Team World as their alternate—in two tie-breakers in Mexico, and beat No7 ranked Alexander Zverev—who plays in Team Europe—in Cincinnati.

He is also one of three names in Prague lined up to play the inaugural #NextGen Race to Milan. He sits at No9, with Zverev leading the young charge by a mile, and Team World’s 18-year-old Canadian star, Denis Shapovalov, second in the Race.

Alongside Kokkinakis, Team Europe has selected Fernando Verdasco as their alternate, though judging from the vim and vigour of the ball striking during practice sessions by Federer, Tomas Berdych, Nadal and Zverev this afternoon, they are all in rude health.

They were certainly putting the unusual O2 court through its paces: It is black—though it shows every skid mark in shadowy grey—and is predicted to be a fast-to-medium pace. Federer would brook no argument that that would suit the opposing team: “It should suit everyone’s game!”

Not until Thursday afternoon will each captain present their line-ups for Friday’s two sessions in a blind exchange, so it is yet to be seen whether Borg will bow to the inevitable and put Federer and Nadal on the same side of the net for doubles. The No1 and No2 in the world both relish the chance, and it would, in truth, be a huge surprise if they don’t get their wish.

Incidentally, in another twist to the format, on the second and third days, one captain will submit his card blind for the opposing captain to review before selecting his players. And Borg gets to choose which day he wants to pick his team after reviewing Team World’s selection.

Will there be any more twists in the Laver Cup tale? The next four days will decide. Meanwhile, belt up: It could be a fast and furious ride.

Read more about the schedule and format of the Laver Cup.

Antonio Conte: My message to Chelsea fans about Tiemoue Bakayoko