US Open 2017: Resurgence is name of the game as Kevin Anderson wins through to face Rafael Nadal 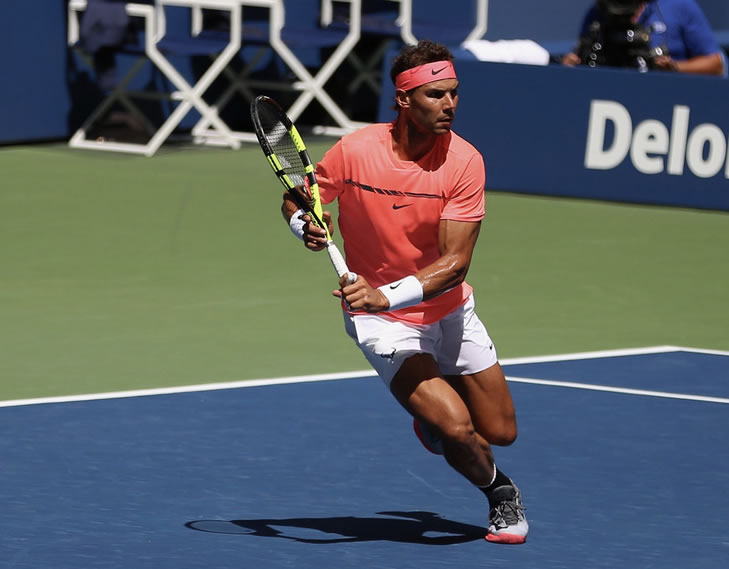 A full fortnight ago, the US Open draw divided itself into two very different halves.

Three former champions fell into the top half, two of them head and shoulders above the rest in the Race to London: Rafael Nadal and Roger Federer. They arrived here as favourites to make a clean sweep of 2017s Majors, for they had won all three thus far plus a clutch of Masters titles.

They also formed part of one of the biggest storylines of the fortnight: a possible first meeting in New York after playing each other 37 times. There was also the compelling prospect of a rematch between Federer and 2009 champion Juan Martin del Potro, who the draw had thrown into Federer’s quarter. They had not met at Flushing Meadows since the Argentine came from behind to beat the Swiss in a dramatic five-setter.

Maybe in this heavyweight half, though, it would be one of the younger top-10 stars who broke through: Grigor Dimitrov, Dominic Thiem, Nick Kyrgios. In the event, it was the unexpected teenager Andrey Rublev who flew the flag for the new generation, all the way to the quarters—a giant killer until he faced Nadal.

And it was the three remaining former champions who completed the line-up, though each semi-finalist had rather different experiences. Nadal had not faced a top-50 opponent, while del Potro had to beat No11 seed Roberto Bautista Agut, produce a remarkable comeback from two sets to love down to beat No6 seed Thiem—while fighting a virus at the same time—and then pull off a four-set bashing of Federer.

As the weary Federer, who admitted he had come into the tournament under-prepared as he nursed a back injury into fitness, said:

“Juan Martin deserves it more. I feel I have no place in the semis and he will have a better chance to beat Rafa. The way I’m playing right now, it’s not good enough to win this tournament. It’s better I’m out and somebody else gets a chance to do better than me.”

Many expected that del Potro might indeed have the better of top seed Nadal. Though currently ranked at No24, the Argentine this time last year was as 142 and still on the comeback trail from the latest in a series of wrist surgeries. But a year ago, he beat Nadal in the semi-finals of the Rio Olympics. Indeed del Potro had the edge over the Spaniard in hard-court meetings over the decade they had played one another.

But Nadal had been playing himself into real form via those lower-ranked opponents, building up confidence, fitness and sharpness. Just how much did del Potro have left after the physically and emotionally exhausting battles of the last week?

In the first set, it looked as though the Argentine may be heading to his first Major final since that 2009 run: He took the opener with one break, 6-4. But in a flash, Nadal turned on the heat, took command of the baseline, and pushed the usually-attacking del Potro back and into defensive mode.

Cue the strutting, pumping and hyper-intense Nadal so familiar to tennis fans everywhere. He broke immediately in the third set, too, and fired up another 12 winners on his way to a 6-3 set, as the increasingly tired del Potro was unable to respond to Spaniard’s speed and variety of shot.

There really was only one way this match would finish, and that was with two more breaks and another flurry of 11 winners to Nadal and not a break point in sight for the Argentine, 6-2 in 30 minutes.

“Today was the day to play the best match of the tournament, because I played against the toughest opponent in that moment… I woke up today and said to myself that this is the day that I’ll play with the right energy and I needed to increase the level of my game. And I knew that. A lot of times I know that and it didn’t happen, but today it happened.”

He will now play in his fourth US Open final in pursuit his third title here and his first in New York since 2013.

However in this draw of two halves, he will take on a seventh player outside the top 20, No28 seed Kevin Anderson.

For the tall South African has followed a similar path to del Potro’s this year. Blighted by injuries, and staving off the notion of hip surgery during the off season, Anderson missed Brisbane and the Australian Open, dropped to No80 in January, then retired in the fourth round at Roland Garros. He began to regain form from Wimbledon through to Montreal, only to pull out of Winston Salem with an elbow injury.

But once Marin Cilic, the No5 seed who topped the half following Andy Murray’s withdrawal, lost in the third round, and other seeds began to fall by the wayside—Alexander Zverev, Gilles Muller and Jack Sock were likely opponents for Anderson—the South African began to look like the dark horse in the increasingly open bottom half.

Even so, he had top pick off some in-form men in the shape of Borna Coric, Sam Querrey, and now No12 seed Pablo Carreno Busta, who was at a career-high and had not dropped a set through the tournament.

Both men, though, were into their first Major semi-final, so both had more at stake than at any time in their careers. Anderson, in fact, was aiming to become the lowest-ranked US Open finalist since the ATP rankings began 1973.

Perhaps these stats were responsible for the thin crowd in Arthur Ashe as the match got under way, and Anderson was equally slow to get into the mood of the occasion. It was, then, the Spaniard, all nimble footwork and lean, clinical play from the baseline, who got the advantage in the first set.

For only the fourth time in the tournament, Anderson was broken in the seventh game, and Carreno Busta backed up the break with ease. He served out the set, 6-4, looking by far the more energised player and having made just one unforced error.

However, Anderson began the second set strongly with a quick break, and looking more animated. Carreno Busta was still sharp and focused, and pulled off a couple of blistering forehand winners down the line to break back. Anderson had a break chance in the eighth, but the Spaniard’s serve was clutch.

Now the South African began to attack more vigorously, threw in a love serve for 6-5, and all of a sudden, Carreno Busta tightened, and double faulted for a break point. Anderson pummelled to first the backhand and then forehand corner, and got the break and set, 7-5.

Anderson looked to get a jump in the third, firing some big returns of serve to go 0-40 on Carreno Busta’s first service game, but the resilient Spaniard won five straight points for a huge hold. It was to no avail come the fourth game: the Spaniard double faulted at 15-40, and Anderson held to love for 4-1. He did not let up, taking the set, 6-3, and the fourth set showed just why Anderson at his best can be such a formidable opponent. He dropped just four points on serve, won nine out of 10 net points, and offered up not a break point.

After almost three hours, he took his emotional win, 6-4, and celebrated as though he had won the trophy—and rightly so after the perseverance that this late-bloomer has shown. At 31, this will be his first Major final after almost 10 years on the tour—having reached only one quarter-final thus far in this career, in New York in 2015.

Of his celebration, he explained:

“At the end of last year I was told I probably needed surgery on my hip. It’s nine months after thinking I would need to undergo a year’s worth of rehab after surgery, so this means the world to me.”

However, and again rather like del Potro, he cannot allow himself too much emotional release just yet: He has to remain focused on the next match, which is, unquestionably, a mountain to climb.

This softly-spoken man from South Africa must suspend his gentle side and pump himself up for the most pumped champion out there. For Nadal has won all four of their previous matches—and boy, does he want to win one more, and with it, his 16th Major.