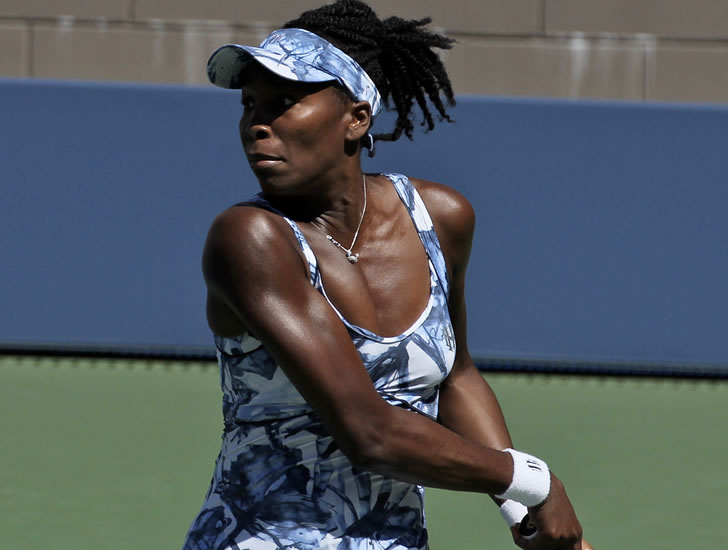 Venus Williams is through to the last four in New York Photo: Marianne Bevis

This year’s US Open women’s draw has produced enough storylines to keep even the most demanding fan happy.

But Halep’s tough first-round loss to Maria Sharapova as good as closed the door on her chances, and Wozniacki, Konta, and Kuznetsova excluded themselves by also losing too soon.

By the quarter-finals, both the Wimbledon and French Open champions—Muguruza and Jelena Ostapenko—were out, and the defending US champion Angelique Kerber was long gone. Only two former Major champions remained in the draw, and Petra Kvitova and Williams were drawn to face each other.

And extra thrill for the home crowd, four Americans remained in the mix for the first time since 2002, and these brought great stories of their own.

Madison Keys, age 22, broke the top 10 last season only to face wrist surgery, and she was missing until March this year. But by New York, she had won Stanford, and had now beaten No17 Elena Vesnina and No4 Elina Svitolina to reach the quarters of her home Major for the first time.

Sloane Stephens, 24, had foot surgery at the start of the year, returned in July, and then made the semis at both the Rogers Cup and Cincinnati. She came to the US Open on a protected ranking, and eventually came through three tough three-setters over three seeds to make her first US Open semi-final.

There, Stephens would await the result of that high-profile, high-octane quarter-final: Williams against fellow Wimbledon champion Kvitova.

Here, too, were emotional storylines of triumph over adversity.

The popular Czech was seeded at just No13, for she had only returned to competition at Roland Garros after a devastating attack to her left playing hand in December.

She went on to win Birmingham, and then strung together a few good wins through the hard-court swing ahead of the US Open, but she faced a tough draw in New York. No matter: the power game and steely determination of the Czech saw her producing her best tennis since her return. She did not drop a set against Jelena Jankovic, Alize Cornet and Caroline Garcia, and she capped it all with a superb victory over Muguruza, 7-6, 6-3.

Her return to such form so soon after that attack ensured she had equalled her best ever run in New York, and with a 4-1 head-to-head over the veteran Williams, Kvitova was now targeting another personal best, a first ever semi here.

But then the performance of Williams was proving pretty remarkable, too. The oldest woman in the draw, at 37, the American was making her 19th appearance at the US Open, yet was the only woman in the draw to have reached two Major finals this year.

Hard to believe, then, that six years ago, at this very tournament, she received a diagnosis of the debilitating Sjögrens Syndrome, and with it a question mark over her future in the sport. She promptly fell outside the top 100, yet here she was, 22 Majors later, targeting not just her first Major title since 2008 but the No2 ranking for the first time since early 2003.

And while her head-to-head against Kvitova did not make optimistic reading, the numbers needed a footnote: All five of their matches had gone to three sets, and the three most recent ones had involved tie-breaks.

This would be no different, in as compelling and intensely fought a contest as one could wish for. Both women, both over 6ft tall, the rightie Williams and the leftie Kvitova, delivered brutal tennis off the ground and from their serving, so that the rallies early on were quick and decisive—though a scattering of double faults betrayed nerves on each side.

Kvitova got the early advantage to break for 3-1, but Williams then served to love and broke right back. Her run continued to five games with another break to close out the set, 6-3.

The Czech then roared back—literally at times, as her passion found its outlet in screams of determination. After a quick break, she had to fight off break point, thumped a forehand, threw in a sliced drop shot, and completed the hold with a backhand winner, 3-0.

Then came a brief delay to close the roof against some advancing rain, but it did not hold up Kvitova, who aced to hold for 4-1, and she would keep her lead for the set, 6-3.

And she carried her fierce momentum into the third set to break in the third game. However, Williams had the crowd firmly in her corner—what felt like all the 22,000—and she had a steely look in her eyes. She had no intention of giving this one up, and broke back in the sixth game.

The American had to dig deep in the ninth game, but found a 120mph ace to help her through two deuces to 5-4. Kvitova did not waver, serving to love, and yet again, their contest would be decided by a tie-breaker.

And once Williams got the bit between her teeth, she became an irresistible force. She raced to 5-1, each woman double faulted, but Williams served it out, 7-6(2) in real style.

Williams, then, will play her first US Open semi-final since 2010 against fellow American Stephens come Thursday. Tomorrow, Coco Vandeweghe will take on Pliskova and Keys will face Kanepi to see whether the American dream can continue. Could the home nation really boast four American semi-finalists this year?

But for the moment, it is the Williams storyline that dominates. It was exactly 20 years ago that the teenage Venus reached the final at her first US Open. Can she really do it again? After her performance thus far, it would be a fool who bet against it.

US Open 2017: With his first Major semi, Carreno Busta bursts into WTF contention