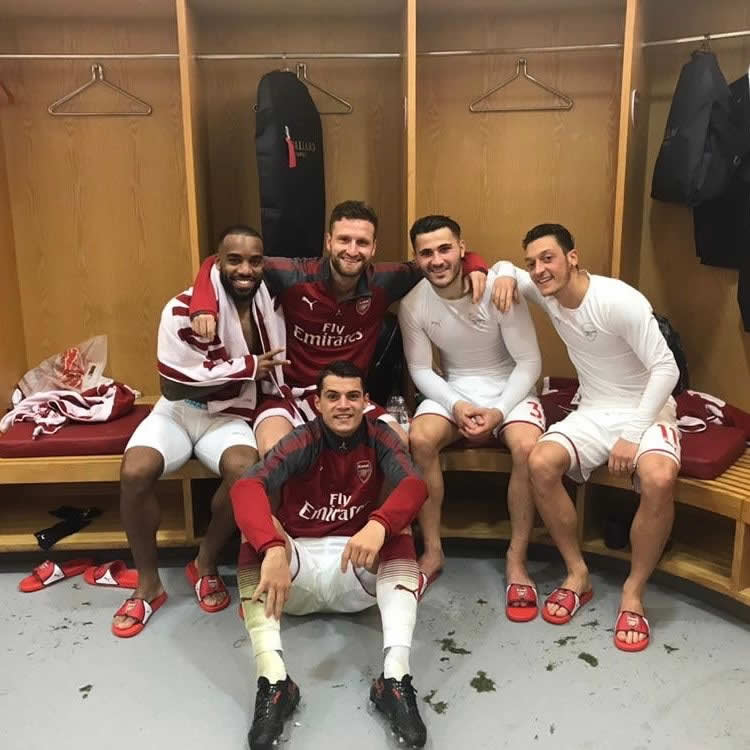 Mesut Ozil and Alexandre Lacazette looked to be in high spirits as they posed for a picture in the Arsenal dressing room following their impressive 2-0 win over Tottenham on Saturday lunchtime.

Ozil was named as the man of the match as the Gunners secured an impressive win over their bitter local rivals to reignite their Premier League title hopes.

The Germany international provided the assist for Shkodran Mustafi’s opening goal in the 36th minute at The Emirates.

And it was Lacazette who set up Alexis Sanchez for Arsenal’s second from close range just five minutes later.

Sead Kolasinac and Granit Xhaka both played the full 90 minutes for Arsene Wenger’s men and they looked to be in high spirits as they posed for a picture with their team-mates in The Emirates dressing room.

Arsenal now turn their attentions back to Europa League affairs and their trip to Germany to take on Cologne on Thursday night.

The Gunners are one point behind Tottenham in the Premier League table after 12 games of the new season, and Wenger’s men travel to Burnley in the top flight next weekend.