The Nitto ATP Finals is set to kick off at The O2 in London, with the likes of Roger Federer, Rafael Nadal and Grigor Dimitrov in action 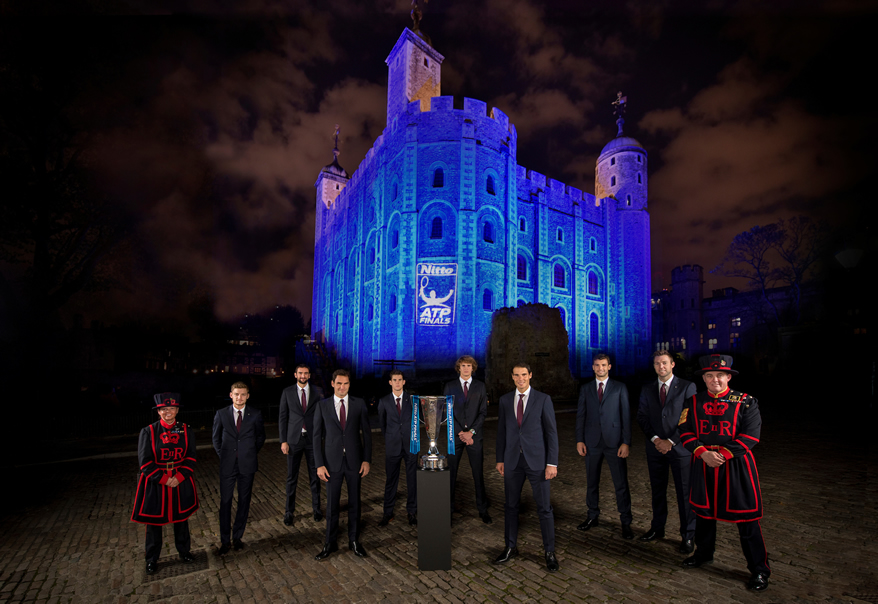 For today’s tennis audience, the first playing of the end-of-season championships in 1970 may seem an eternity ago.

How many of those who pack out London’s landmark O2 arena over the next week will ever have watched Stan Smith, Tom Okker, Wojtek Fibak? And although the names of the tournament’s most prolific early champions still resonate, it will be only those of more mature years who actually got to watch Ilie Nastase, Bjorn Borg, John McEnroe and the contemporaries who populated that first decade.

But for the last 15 years, there will be few tennis fans, young or old, who do not recognise the men who have dominated the prestigious World Tour Finals—the tournament that features only the creme de la creme.

For the champions’ honours board—indeed the runners-up roster—has become packed by what has become known as ‘the big four’.

The biggest presence is Roger Federer: six times champion, four times runner-up, and with 15 appearances dating back to 2002.

Novak Djokovic has won five times and been runner-up once, with 10 appearances to his name.

Rafael Nadal: 13 qualifications, though he did not play on five of those occasions, twice the runner-up.

And finally, Andy Murray—finally, because after playing nine times, and reaching the semis three times, the Briton won in front of his home crowd, unbeaten through the tournament, last year.

It has, indeed, been a rare man who has broken the big four strangle-hold: Only David Nalbandian and Nikolay Davydenko since 2002. For the last five years, ‘the four’ have filled each final. However last year, there were hints of a change.

The eight-man field was topped by Nos1 and 2 Djokovic and Murray, and those two would go on to swap places at the top of the ranks with Murray’s victory over his rival in the final, clinching his first year-end title at the same time.

But for the first time in 14 years, the familiar face of Federer was absent, along with Nadal: Both had missed extended periods during 2016, Nadal with a wrist injury, Federer following knee surgery after the Australian Open. The Swiss, indeed, had not played since Wimbledon.

This year, however, the story has not just been reversed but shaken up to give the tournament its freshest look in a decade. Perhaps the last such shake-up—a prelude to the ‘big-four’ dominance—came in 2006, when Ivan Ljubicic and Davydenko made only their second appearances, James Blake and Tommy Robredo their only appearances.

Federer and Nadal were, even then, already in place, but gradually, the annual line-ups developed a familiar look with stalwarts like Tomas Berdych and David Ferrer, plus regular incursions by a few others such as Juan Martin del Potro and Stan Wawrinka.

However, it is that original duo that tops the groups after sweeping all four Majors between them this year, and the majority of the Masters, too.

This time around, it is Djokovic and Murray who have been long absent with injury, though in fact none of last year’s semi-finalists have made it to the 2017 draw.

The next three ranked players at London in 2016, Wawrinka, Milos Raonic and Kei Nishikori, have drawn a line under their seasons due to injury. Last year’s No6 Monfils is also among the walking wounded. And del Potro failed to make the cut after a late but exhausting surge towards the top 10.

Disappointment, then, for some, but every cloud has a silver lining: This year, a swathe of young, popular players has brought a fresh look, with fresh styles, to the table.

Thiem is back, but while he was the youngest here last year, he is usurped by the charismatic 20-year-old Alexander Zverev, who qualified in No3 position after winning five titles, two of them Masters, this year. He was set to headline the debut playing of the NextGen tournament in Milan—but became too big a success: The 6ft6in German joins the big boys in London.

Here too is a pair 26-year-olds of prodigious talent, both nimble, elegant players who have taken time to reach full bloom. Grigor Dimitrov has won three titles, one of them a Masters, and pressed Nadal to the limit in the semis of the Australian Open. David Goffin went on an unbeaten two-title run in Asia, and had made two further finals before an accident at Roland Garros took him out of the grass season entirely.

Finally, the ever-improving big tennis of Jack Sock grabbed the American the eighth spot in the last match of the 2017 tour, the final of the Paris Masters.

Their number is made up by former US Open champion Marin Cilic, who reached the final at Wimbledon, and is appearing in London—at 29, the third oldest here—for the third time.

But can any of these challengers upset the old order? Or will final Sunday bring a fifth contest this year in this most famed of rivalries, Roger and Rafa?

Only twice before have they met five times or more in a season—back in 2006 and 2007. The more things change, then, the more they seem to stay the same. But for the rivalry that has defined a tennis generation, most will surely be content for it to last just a little longer.

He said, he said… quotes from 2017 singles players

“[Federer chasing for No1] I was not afraid at all. It’s something that I was clear in my mind. I will not do a different calendar to try to be No1 again. I did what I believed was best for my happiness, my tennis career and for my results.

“That I am No1 here is great, a very important achievement especially at my age… A year ago it was not in my mind to be in that position again. But here I am. For me the best thing is to end the season the best way possible, have a rest and work well to start the next one.”

“Last year I couldn’t be here, so it’s nice to be able to do it again, because this year I had to start further back in the rankings. The early goal was to be at the half-way point by Wimbledon—around 8th in the world. So by winning the Australian Open, I was in a good position… I was very happy how I played throughout the entire season, stayed pretty much injury free apart from the back issue in Montreal.

“It’s one of the big highlights, for me, of the year, playing here at the World Tour Finals, and happy I made it.”

“[As for playing clay season in 2018], everything’s back on the table. Of course I hope I can play, but I just better be very cautious of my decision making… I’m going to take everything into consideration.”

“[On the frustration of playing in this era] “A lot! Even when you think you’ve put enough work in, there’s still that much more to go. I’d rather qualify later than never but it’s definitely a very special era to play in. Being out here with them, proving you’re one of them gives you a chance to grow. Now they’re late 20s, early 30s, and playing their best tennis so it gives you a lot of hope and a lot to look forward to.

“You have to stay healthy, work with your team, and things can only get better. One of my main goals is to get better than yesterday. Age doesn’t mean anything to me anymore.”

“I’m not really tired. Last year I was for sure. But I had some good practices, I’m feeling very fresh. There was a lot of pressure on me last year. It was something completely new for me. I was nervous, it’s very different this year. I qualified as the fourth player so I’m not the last player—it feels better. I think I can enjoy it more this year.”

“[With Davis Cup final next] I try not to think about it for the moment. I try to play day after day, week after week. It’s very important for Belgium so it’s never easy to have two really big events in two weeks, but I’ll try to give everything here and then for the Davis Cup finals.”

“The year has been pretty brilliant for me. I have found it in me to play at a good level every week. That’s given me a lot of confidence and belief when playing the top guys. My mental approach is different, I feel more confident and have more belief that I can produce good tennis and not put myself under big stress.”

“I’ve had a great season. Winning two Masters is special for anyone. Particularly after the ‘big four’ dominated and no one else winning two in one year for 10 years.

“I think maybe Roger and Rafa have been playing the best tennis of their lives this year. Particularly maybe Roger on the fast surfaces. It’s amazing he’s able to play that way at 36 years old. Though I’m not saying he’s old or anything! [But] all of us young guys are working quite hard to maybe replace them a little bit. We’re working towards winning the biggest tournaments in the world.”

“It was a good start to the year, kind of a rougher middle part, and then obviously an amazing week to cap off what I thought was going to be my last week of the season.

“Going into Paris I was hoping to play some matches, and was getting ready to regroup mentally and for my off-season at home. I genuinely had no idea that I could make London after the five, six-month stretch I had there in the middle. It wasn’t until after the match against Lucas Pouille that someone mentioned I could still make London. Obviously the closer it got and the farther I got in the draw, it became more of a reality and was definitely a motivation there at the end of the week.”