Grigor Dimitrov beats Dominic Thiem 6-3 5-7 7-5 in his ATP Finals opener in London, in what was his debut at the season-ending tournament 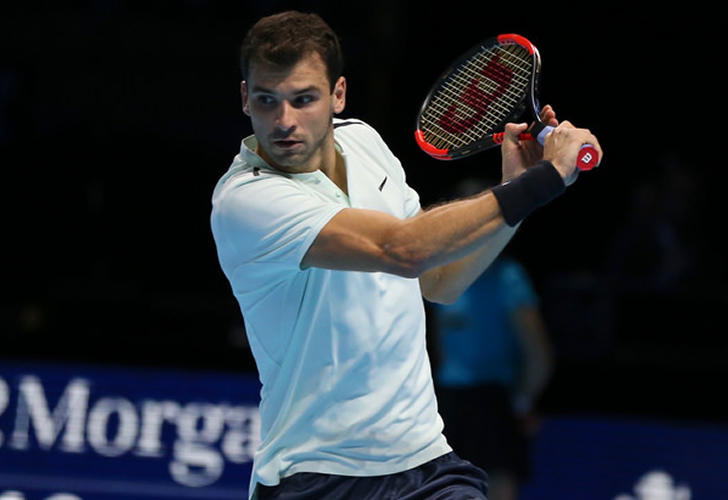 Tennis, perhaps, has grown used to the presence of the one-handed backhand, because tennis has become accustomed to the presence of one that shot’s most successful exponents. After all, Roger Federer began winning Majors in 2003, and began qualifying for the year-end tennis jamboree—now known as the World Tour Finals—since 2002.

And at 36 years of age, he is still winning Majors and still qualifying for the tour finale.

Once the mainstay of tennis, the single-handed backhand has steadily become a rarity alongside the dominant cousin wielded by two hands. Certainly a few of Federer’s generation, the likes of Feliciano Lopez and Philipp Kohlschreiber, kept the faith, along with the slightly younger Richard Gasquet, Stan Wawrinka, and Pablo Cuevas, and all but Gasquet—a finalist in Montpellier—have won titles this year, and reside in or around the top 30.

But one of the most elegant shots in tennis seems to be having something of ‘a moment’. As the 2017 season draws to a close, no fewer than four of the top seven players use a one-handed backhand. Federer still leads the way, at No2, and Wawrinka, despite closing down his year early due to injury, is at No7.

In between them, though, are two younger men, representatives of the generation born in the 1990s, and playing among the World Tour Finals elite: Dominic Thiem age just 24, qualified for the O2 last year, while Grigor Dimitrov is playing here for the first time.

Only once before in the last decade have there been three single-handers in the tournament, when Gasquet qualified with Federer and Wawrinka in 2013. Before that, it was names from a different generation—well, from Federer’s generation—who made up half the draw. James Blake, Ivan Ljubicic, Fernando Gonzalez are all now retired. Indeed, Ljubicic is now coaching his contemporary Federer.

Federer carried the banner alone in his group on opening day: Now it was the turn of Dimitrov and Thiem to open proceedings in the Pete Sampras group, and show just how different the one-handed game can be.

Dimitrov, a tall, slender man, may not have the most powerful backhand, but it is played with peculiar elegance and extreme flexibility. Few sweep their arms back in such an exaggerated action, but he is able to create fine angle, generate skimming slice, and be creative around the net—when he chooses to do so.

Thiem is cut more from the Wawrinka clothe: a strong 6ft man with a power-drive of a backhand that punches flat down the line and cross-court, but it is rarely used for chip-and-charge, rarely has a lot of subtlety in its make-up.

Coming into this match, both had enjoyed strong starts in a year when they had scored one win apiece.

Dimitrov tested Rafael Nadal to the limit in the Australian Open semi-finals having won in Brisbane—where he beat Thiem—and went on to win indoors in Sofia. He peaked again in late summer to win his first Masters title in Cincinnati, made the final in Stockholm, and hit a career-high No6 and qualification for London.

Thiem made his first Masters final in Madrid, beating Dimitrov along the way, and reached his second successive French Open semi-final. He became only the second man to beat all the ‘big four’ on clay, and one of only two men to reach the second week of all four Majors. He too entered London at a career-high, No4.

It was in many ways, then, an intriguing match-up between these two contrasting personalities. Thiem, serious, shy and restrained, talked of the pressure of playing here as a 23-year-old for the first time last year:

“There were a lot of new and bigger pressures for me last year, to somehow qualify as the last player and be in this tournament with all the big stars—it was something completely new for me. It’s very different this year, I qualified as the fourth player so I’m not the last one anymore. It feels better, that I can enjoy it this year.”

Dimitrov is more extrovert and more expressive, in body language and conversation—the one among the young generation of single-handers to join the singing ‘one-handed backhand boys’ with veterans Federer and Tommy Haas. He said of the tournament, grinning ear to ear:

“I’m pretty pleased to be out here. For sure it’s a dream come true for me. In the past, I’ve missed qualifying by one spot. It’s always been a goal of mine to come out here and perform.”

But while Thiem may have hoped to feel less pressure this year, he was as tight as a drum at the start. But then Dimitrov was, too, and the opening few games were drawn-out affairs littered with errors. However the Bulgarian shook off his nerves the sooner, benefitting from some wayward serving from this opponent: Thiem would end up hitting only 37 percent of his first serves into play.

Dimitrov broke in the fourth game and that gave him the confidence to move forward and take the initiative, while Thiem retreated behind the baseline. Dimitrov edged to the set, 6-3, even with just nine winners to 14 errors. The Austrian had made only five winners to 14 errors, and looked lost for answers.

Things were closer in the second set, helped by a rise in Thiem’s serving to over 50 percent. He also began to try out a few net chases, and they paid dividends, as Dimitrov’s serving level dropped. Twice the Bulgarian fought off deuce, twice Thiem held to love, but there was a break chance until the 11th game. Thiem saved it with three big serves, and Dimitrov then sprayed errors to offer up a love break and the set, 7-5.

Both were still guilty of more errors than winners, almost trying too hard, it seemed. Dimitrov backed off his winning tactic of chasing to the net, but was still the first to have break chances, in the fifth game and then the seventh, and eventually the Bulgarian net game got its reward, a short-angled volley winner, and he held for 5-3.

Still he could not close it out, as Thiem made a volley then a backhand winner, and Dimitrov shanked to hand the break back. But the Austrian’s advantage was short-lived: at 0-40, he double faulted, and Dimitrov had another chance to serve it out. Big serving took him to 40-15, only to double fault, put a forehand wide, and it was deuce. But at the third time of asking, the Bulgarian took set and match, 7-5.

It had taken over two hours and 20 minutes, and both men had hit almost twice the errors to winners and barely got their first serve at 50 percent. It was not the highest quality match, but compelling in its own way in its swings in confidence and tension, and in the uncertainty about who would hold his nerve.

The huge Dimitrov grin reappeared as he took the applause of the centre court, but he was almost lost for words:

“I’m not going to lie—I was pretty nervous, my first match out here. I’m just very grateful to win that match, especially in that manner. It’s never easy to come out here and play for the first time.

“Entering into this tournament was a dream of mine and it wasn’t just to compete—I want to win. Things seem to be going the right way so far.”

So it proved to be more creative, more adventurous Dimitrov one-hander that won the day—and come the weekend, that extra set may make all the difference in sealing a semi-final place.