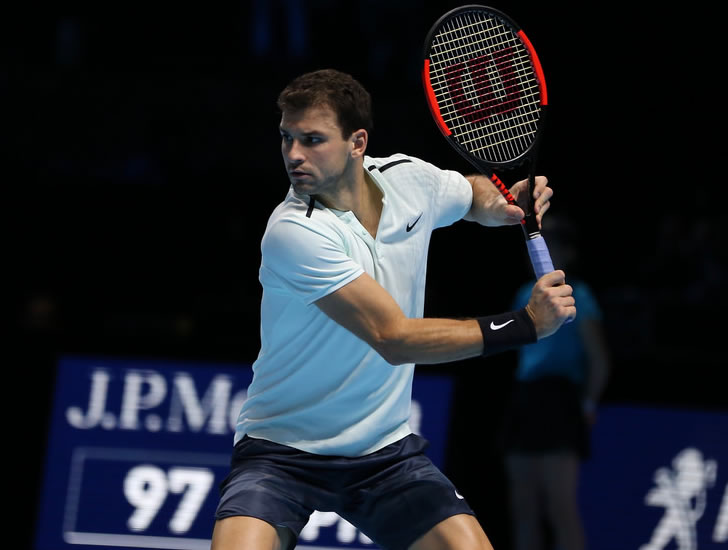 It was entirely possible that Wednesday would prove to be a red-letter day for one of the debutants playing at the prestigious end-of-year showdown in London this week.

There were already four new faces scattered among the old familiar ones that make up the elite eight for the Nitto ATP Finals—the unofficial ‘fifth Major’ in tennis. And following the withdrawal of the world No1 Rafael Nadal with knee injury after his opening loss, a fifth man was added to the mix.

Alternate Pablo Carreno Busta missed out on the cut courtesy of the very last match on this season’s main tour when Jack Sock sealed the Masters title in Paris, so will surely relish his moment in the spot-light on the biggest indoor stage in men’s tennis.

Each evening session has played to a capacity crowd, almost 18,000, and looking at the 26-year-old Spaniard’s rise up the ranks this season, he has proved that he does like the big stage: Semi-finals in Indian Wells, quarter-finals at the French Open, semi-finals at the US Open. But since that stand-out run, he has won just one match in five tournaments—the reason he got pipped at the post by Sock.

Now he had a chance to redeem himself: He could certainly play a big part in deciding who advanced to the semis from the Pete Sampras Group, but such are the complexities of qualification here that he could still make the last four himself, despite only playing two matches—though he would need to win both. He certainly was aware of the opportunity being presented to him.

His fate could be decided against Dominic Thiem, himself playing here for just the second year—but that would be later.

“Yeah, normally the alternates here [only] play the last match. But I have the opportunity to play two matches, and also to be in semi-finals. I need to be focused on the match against Thiem. I think will be very tough. But, well, why not? I can win it, no? I think I need to play my best, of course. I was practising these days here with all the top players, so I am ready.”

First though were the two other debutants in the group, fellow 26-year-olds Grigor Dimitrov and David Goffin.

Both had begun in fine form, more than justifying their presence here. Goffin, who had to miss the entire grass season after sustaining an ankle injury during the French Open, assured his place with back-to-back titles in Shenzhen and Tokyo, plus a semi-final run in Basel and two finals on the indoor courts in Europe at the start of the year. Along the way, the slight Belgian had also led his nation to the Davis Cup final for the second time in three years.

Like Goffin, Dimitrov reached a career-high ranking to be here. He tested Nadal to the limit in the Australian Open semi-finals having won in Brisbane, and went on to win indoors in Sofia. He peaked again in late summer to win his first Masters title in Cincinnati, made the final in Stockholm, and hit a career-high No6 and qualification for London.

Both have popular followings from tennis fans with their elegant and varied shot-making, but for their nations’ fans, they are heroes, the first Belgian and the first Bulgarian to qualify for this special tournament in its 48-year history.

Perhaps the biggest question, however, was how they would bounce back from demanding three-set matches in their openers. In particular, Goffin, who had made up so much ground since the summer, has carried a knee problem through the latter stages of the autumn, and arrived here with taping. For a man who depends so much on footspeed and movement, on nimble reactions and precision timing, it was a question mark.

Dimitrov tested that movement and durability from the get-go, too, upping the tempo at every opportunity with aggressive plays and punishing depth to the corners. Goffin struggled to live with the pace, forced into errors as his accuracy suffered.

In the blink of an eye, Dimitrov had a break and held for 3-0, 15 points to three. Goffin worked hard to keep in the next game, holding off five deuces and three break points, but beaten once more, and Dimitrov rubbed salt into the wound with a love hold.

A big forehand winner from the Bulgarian finished off the set, 6-0 in 28 minutes, with Goffin unable, it seemed, to produced his usual fleet-footed tennis, and with his timing just off, the errors flowed.

Dimitrov raced from the blocks in the second set as well, dropping just two points to take a 2-0 lead, with Goffin twice double faulting. The Belgian brought up his only break point of the match, but that largely because of a loose game by Dimitrov, and he could not capitalise.

Goffin finally got on the board in the fourth game, and for a few minutes, it looked as though Goffin may get some momentum as he went 30-0 on Dimitrov’s serve. The Bulgarian survived four deuces, but that was as tough as it got. The Belgian held serve once more, but Dimitrov broke through the last long game to finish the victory, 6-2, in a swift 73 minutes.

For lovers of attacking tennis, it was a treat, with 18 winners and 12 points won at the net from Dimitrov. And when he plays his creative, flowing tennis, it is a reminder of why he was touted as ‘the next big thing’ almost as soon as he won the junior Wimbledon title in 2008. Come 2014, with three titles and a semi-final run at Wimbledon, he rose to No8 and missed London qualification by a hair’s breadth.

This season, the popular Bulgarian picked up three titles for the first time since, and that Masters title clearly gave him a boost through the latter part of the year.

No wonder he has not stopped smiling since he hit the O2, and those emotions were writ large on court after the match:

“I was thinking just now, you get a few days out of the year where everything you touch turns to gold and the first set came out like that. You have days like that, you work all year for that… It is nice when it comes in such an occasion, and I’m very humbled to win that match.

“I think my movement was great, I was putting in a lot of returns, I was reading the game really well and believing in my shots. I was just following my thoughts. The next thing you know, the match is over. I felt I could have played more.”

He will play more, against Carreno Busta on Friday, but he is already assured of his semi-final place—though he will not know who qualifies with him until the rest of the matches are played out.

Goffin, despite his loss, could still qualify with victory over Thiem, and contrary to appearances, the Belgian told the media that his knee was good enough to keep fighting:

“I have a tape on my knee since the US Open… But I’m almost 100 percent physically. I’m feeling OK. It was not the problem today. It was just a tough, tough match against Grigor who played really well. Yeah, it’s life.

“He was a little bit more aggressive. He came to the net from the beginning, from the first point. It was not easy for me to lose my serve from the start. It was tough for my confidence… In the second set, I had some opportunities to break back, but he was really solid until the end of the match.”

The evening’s match between Carreno Busta and Thiem will not clarify the semi-final picture—that must wait until Friday—but Dimitrov has scored one more milestone in this fine season.

“Right now, from the top of my head, this is definitely the [season] that sticks out in terms of consistency, focus, striking the ball, movement, agility, everything that I can possibly think. Yes, it happens. Again, I work for those moments, too. They don’t just come. They don’t just come to you. When you recognize that, you might as well make the most out of it.”