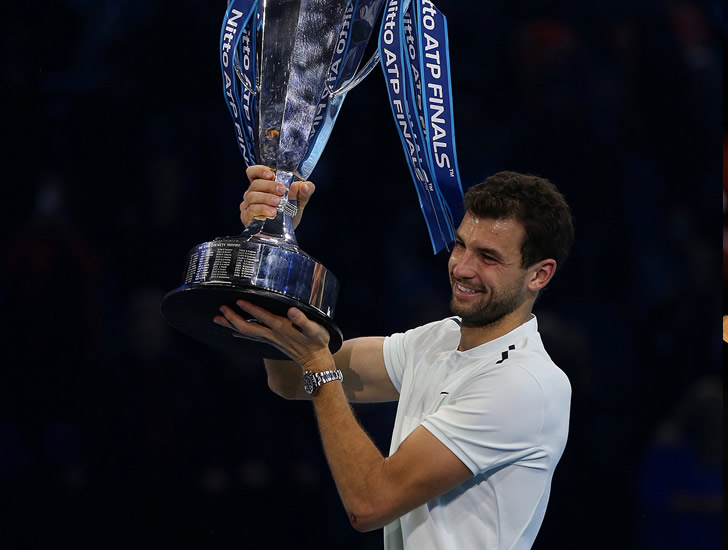 This is a tournament that has been dominated by a very select group of men for close to 14 years.

The tennis calendar’s finale, the “fifth Major”, the tournament played by only the elite eight singles players of the year, has been won by one of the “big four” every year bar two since 2003, and in seven of those finals, they were also the runners-up.

This year, then, marked a very significant landmark, with records of a different kind being set right, left and centre.

Only two of those former champions would play after Djokovic and Murray, along with other recent qualifiers, Stan Wawrinka, Tomas Berdych, Kei Nishikori, and Milos Raonic, drew lines under their seasons because of injury.

The top players of the year, Nadal and Federer, headed this year’s groups as Nos 1 and 2 in the world after their own injury absences at the end of 2016. But Nadal pulled out after one match with knee injury, and Federer—who arrived here with a tour leading seven titles and unbeaten through Shanghai and Basel—struggled to keep his 36-year-old body fired-up: He lost a punishing three-set semi-final.

All of which meant that this was the year when the “90s generation” could break the glass ceiling, and give new players with new styles the chance to impress a world of new fans.

Half the players to qualify this year were debutants, which rose to five out of nine once Pablo Carreno Busta took the place of the injured Nadal. With Dominic Thiem, the tally of players born in the 1990s rose to six out of nine, and three of them made the semis—all of them a decade younger than fellow semi-finalist Federer.

Already, then, this tournament had seen milestones come and go, not least seeing three debutants in the semis for the first time in its history. But the last two men standing would up the record quotient still further: Grigor Dimitrov and David Goffin.

For the first time in the tournament’s history—since 1970—two debutants would battle for the title. A first-time qualifier had not won the title since 1998.

Both players, new No3 Dimitrov and new No7 Goffin, had already achieved career high rankings. If Goffin won the title, both would end the year in the top five.

Each player was the first from their respective countries, Bulgaria and Belgium, to even qualify for the World Tour Finals, let alone make the final—let alone win. 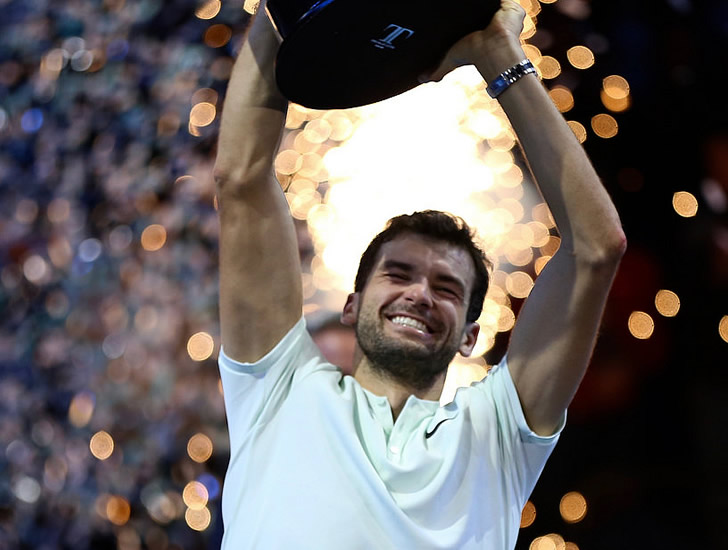 Goffin, by beating first Nadal in the round-robins and then Federer in the semis, became only the sixth person ever to beat both stars in the same tournament. He had never beaten either man before.

Each player was already into the biggest final of their career, and one would walk away with their biggest title.

For a couple of hours on Sunday evening, however, the two 26 year olds would have to put all the weight of those achievements to one side. That, though, looked like a harder task for Goffin. As if it was not enough that Dimitrov had a 4-1 lead in their head-to-head—with three more wins in their pre-main-tour days—the Bulgarian had inflicted a brutal defeat on Goffin in the round-robins phase, 6-0, 6-2.

But Goffin had produced equally spectacular tennis—and mental resolve—to overcome Nadal, 7-6, 6-7, 6-4, then dismiss Thiem for the loss of only five games, and finally to hit back from a bruising opening set against Federer, 2-6, to dominate the man who was his childhood idol.

However, when records, statistics, head-to-heads, rankings—and perhaps even fame and fortune—were put to one side, fans had the chance to revel in tennis played by two of the most athletic, nimble, elegant men on the tour. It was also no accident that both had grown huge followings with their charm, sportsmanship and modesty. And those unique national ‘firsts’ ensured that their respective tricolour flags packed the O2.

That it had captured the imagination was clear from the first point. Even the nose-bleed seats in the vast 17,000 O2 were full, and once both Goffin and Dimitrov began to ply their precision exchanges, angled to corners, flat and fast, off both wings, and mixed with a good peppering of net attacks, the crowd was fully engaged.

Goffin began as he had finished against Federer, a searing backhand winning return of serve, and then another to break in the first game. His determination to attack showed on serve, following in for the volley, but Dimitrov’s return was up to the task, and he broke straight back.

Again Goffin’s superb timing and footwork generated a couple of cracking winners, first off the forehand then the backhand and he had another break: It had taken a quarter of an hour for three games.

This time Goffin opened some clear water with a hold, 3-1, but Dimitrov was constantly upping the pace, and although the Belgian threw in two bold serve and volleys in the eighth game, he double faulted, too, and it was level, 4-4.

Both were now pulling off some beautiful shots, and the first to blink would surely be punished. It looked like two double faults from the Bulgarian would be it, but he held, and then Goffin came under severe pressure, from Dimitrov and his thousands of supporters. He saved four set points, but acquiesced on the fifth, 7-5 to the Bulgarian, a full hour on the clock.

The stats showed just how fiercely Goffin was going on the attack, 14 winners to Dimitrov’s six, but with a similar discrepancy in the errors. And that picture would persist to the end, with Goffin recognising that he needed to take chances, come forward, and he did so 24 times, though made fewer points as the match went on.

Goffin’s serving certainly helped his cause in the second set as he fought back, apparently the calmest man in the arena. Two love holds and then he aced to fend off break point before breaking in the eighth game. He held with ease, 6-4. And he rode that momentum into the third, and looked as though he was going to do the same to Dimitrov as he had to Federer, working four immediate break points. He would come to rue not converting any of them, for in the sixth game, amid raucous shouting from the hyped crowd, he lost his serve.

He dug in once more, to pull back three match points, 0-40, and the arena erupted as he called on them for support, but Dimitrov would make no more mistakes, serving out for the title, 6-3, after an intense, very entertaining two and a half hours.

Dimitrov collapsed to the court, a worthy champion, and the only one to go unbeaten through the tournament—but both men shed tears.

Goffin, as is the way, was called to collect his trophy first, a despondent figure, but gracious to the end:

It gets no easier, though. Goffin heads straight to France to lead his nation in the Davis Cup final Belgium’s second attempt to win in the last three years.

Dimitrov responded in kind, a generous and well-loved champion:

“It is such an honour to play here. This week has been one of the best I have had. David is such a tremendous guy, forget the tennis. He is one of the most improved players this past week and months. It was an unbelievable effort. I am very proud to play him in the final.

Dimitrov, then, will head to the first Major of 2018 with a new status, as No3 in the world, and a feared opponent for each and every man. He afterwards reflected on what it would mean for the coming season.

“I’m still trying to think about what I just did. I think now we going to sit down and reassess the whole year, see what we’ve done good, what we can improve. Of course, one of my main goals is to win a Grand Slam tournament. This has always been a dream of mine.

“Now slowly I think this thing is getting there… Obviously, this is a great, unbelievable achievement for me, yes. But I just still have a lot to give. I want to perform better and better.”

Most fans of tennis will welcome that ambition with open arms.