We caught up with Liverpool FC youngster Joe Gomez to discuss his return from injury, his first England caps and his relationship with Jurgen Klopp at Anfield

It’s been something of a breakthrough few weeks for Joe Gomez after he made his senior England debut and broke back into the Liverpool FC first team following a lay-off with a serious knee injury.

Gomez played for the full 90 minutes as Liverpool FC held Chelsea to a 1-1 draw at Anfield on Saturday evening.

We chatted to the 20-year-old left-back before the clash with the Blues to get his thoughts on his progress at the Merseyside club and what life is really like under Jurgen Klopp at Anfield.

Congratulations on your first England caps, Joe. How did it feel making playing against two of the biggest teams in international football earlier this month?

“It was a surreal experience. Obviously for me as a kid growing up, I aspired to play for England. They were tough games against top teams and it was a good experience for me. I’ll take a lot from it.”

You were widely praised and won man of the match after your performance against Neymar and Brazil. Is that kind of experience going to benefit you in the Champions League as Liverpool go further in the competition?

“I’d say that it’s just another experience to learn from. I wouldn’t say I’d take too much from it, like getting ahead of myself or anything – or confidence wise. It’s another achievement to have. At Liverpool I play a bit of a different role and I’ve got to try and switch back to what I need to do here.”

“Yeah, I think it is a bit different. There are obviously the small details, like just hearing the theme song and stuff like that. You’re playing teams from Europe and so on, so it’s a bit different in terms of their style of play. The tempo of the game might be a bit different, or just the way the other team plays – you’re not as exposed to how they play. Over the years, you gather up knowledge of Premier League teams and how they normally play. So it is different and obviously for us being back in the Champions League, there is that added meaning behind it, rather than just week in, week out in the Premier League.” 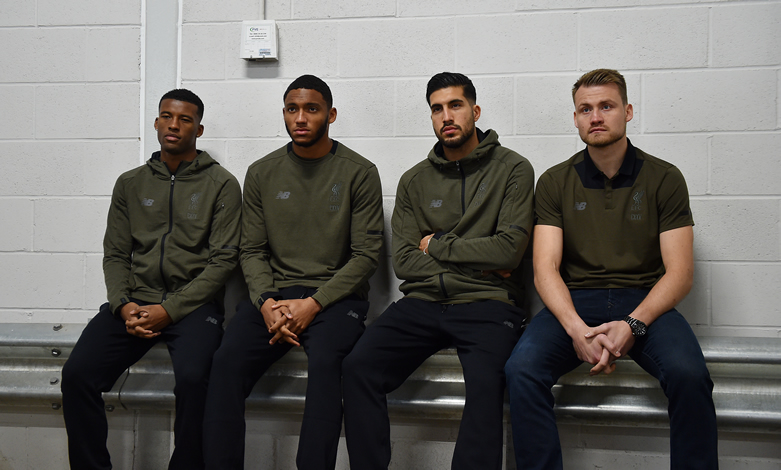 You’ve had a lot of compliments in recent weeks following your England performances. Do the kind words help especially after such a long lay off with a serious injury?

“It’s really nice. Like you said, for me personally, coming back from injury those are the sort of things that motivated me. I aspired to do it again. [But] I try not to read too much into it to be honest with you. I wouldn’t go searching for my name [online] or anything. I speak to my family, and then I try not to get too high with the highs and low with the lows, basically.”

You paid credit to your manager Jurgen Klopp last week after your England debut. How did he help during your spell on the sidelines?

“Obviously the times when he’d speak to me [personally]. I think the big thing was bedding me back in. He seemed to know better than me if I was ready or not, and how I was actually doing, because you’re judgement can be a bit blurred when you come back, whether you think you’re ready and you’re not. He just knew how to bed me in and knew when I was ready.”

What is the best advice Jurgen Klopp has given you to help to improve you as a Liverpool defender?

“I wouldn’t say there’s a specific piece of advice, it’s just his management, the way he goes about trying to get the best out of you. It’s a really personal connection, rather than just giving instructions or telling me to do this, do that. When he tells you something, he really means it. It gives you that desire to want to play for him and get the best out of yourself for the team and for him, because you just like him as a manager and person as well.”

Who did you look up to in the Premier League growing up as a defender that you would like emulate in your own career?

“For me, coming to Liverpool I knew how big Jamie Carragher was, how crucial he was over the years and the number of appearances he made and so on. But in terms of playing style it would probably be Rio Ferdinand in the way that he played. How he was a ball-playing centre-half and so on. I looked up to him for that aspect.”

How important is it for a club like Liverpool to celebrate its history with things like the commemorative New Balance NB|LFC CXXV Sportswear collection?

“I think it’s massive. I think it’s important that it’s taken into account. In this case, it’s how many years the club’s been around and the attention given to it. It is a big thing and a big achievement, especially for a club like this. The gear is actually nice, and personally I’d probably wear it. Me, Gini [Georginio Wijnaldum] and Emre [Can] were actually saying we’re going to keep the tracksuits! The gear is always nice and top quality but it might not be something we’d always wear. But in this case it’s different.”

Joe Gomez was speaking to The Sport Review on behalf of New Balance at the launch of the NB|LFC CXXV Sportswear range. To see the special range in full, visit the official Liverpool FC online store.

Rio Ferdinand opens up about Daniel Sturridge at Liverpool FC