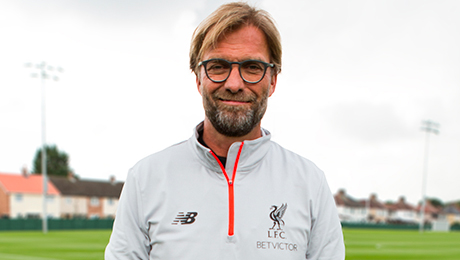 The German coach signed Robertson in an £8m deal from relegated Hull City in the summer transfer window.

The former Borussia Dortmund coach used midfielder James Milner in the full-back role throughout the 2016-17 season with great success.

Milner’s inclusion was at the expense of Moreno whose persistent mistakes since Klopp’s arrival left him on the fringes of the squad.

However, Moreno has managed to force his way back into Klopp’s starting line-up this season with some more consistent performances despite Liverpool’s defensive problems.

Indeed, the former Sevilla defender has even earned a call-up to the Spain squad for the first time since 2014.

Liverpool boss Klopp believes Robertson needs to emulate Moreno and learn the Reds way before getting a place in the first-team.

“People will say ‘why do you do that? Because he is here and not playing?’

“Because he has to learn. But there is no problem. We are in conversation, talk about it and he has to improve.

“As long as the other players are doing like this. Alberto is like a little machine, he never shows when he is tired and stuff like this. Andrew has had a little less rhythm. So you think now, okay, he will have a game with the national team and come back. We will have a little internal game then and that’s good for Andy.

“So he’s on a good way, a really good way. It’s going well apart from maybe he is not happy he cannot start so often as he would have thought from the beginning.

“But it’s all about improvement and then to be ready for the moment you are used.”

Liverpool were 4-1 winners against West Ham United in their last Premier League game at the London Stadium.

The Reds are in fifth place in the Premier League table but 12 points adrift of current leaders Manchester City.