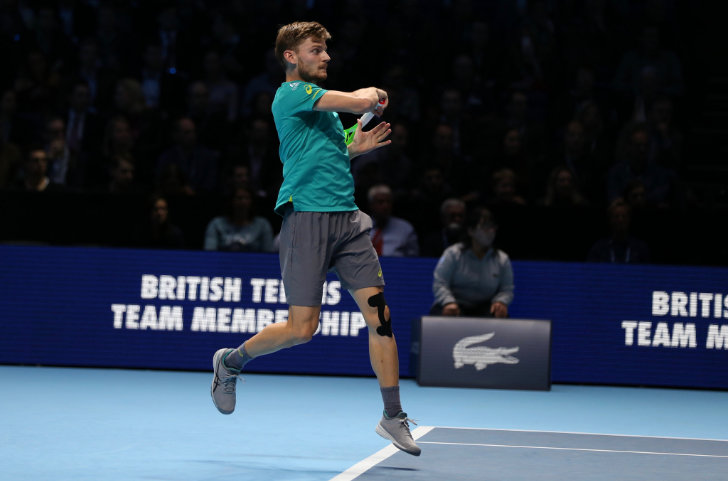 Since its beginning in 2014, it has become one of the most promising rivalries on the tennis tour. There may be two years between Dominic Thiem and David Goffin, but their progress since their first meeting—in the qualifying rounds of Acapulco—have following parallel paths.

Goffin is the elder, but that two-year advantage was as good as wiped out, despite his breaking the top 50 during 2012 with a run through qualifying to the fourth round of Roland Garros, because he needed surgery to a broken wrist in 2013.

But come 2014, he followed a first-round loss to Andy Murray at Wimbledon with a 41-2 run, winning two ATP titles and four Challengers. The Kitzbuhel title marked Goffin’s first main-tour victory and made him the fifth champion born in the 90s. He was not done there, either: He went on to reach the final in Basel, losing to Roger Federer, but reaching No22 in the world by the end of the year.

But what was also significant during this surge up the ranks were four wins over Thiem. Goffin followed Acapulco with wins at Queen’s, Kitzbuhel and Basel—that is, every surface, indoor and out—and although the 24-year-old Thiem has won half their six subsequent meetings, one was by retirement. The most recent two matches went to Goffin, at this year’s Australian Open and Monte Carlo, proving again that the nimble, slight Belgian has the kind of game that can undermine the resilient baseline power of the Austrian.

It was in 2015 that Thiem, still just 21, began to make his young presence felt with three back-to-back titles on clay—and a first completed match-win over Goffin. In 2016, he produced a golden run in the Golden Swing of Latin America and a breakthrough semi-final run at Roland Garros—including that other completed win over Goffin—and a tally of four titles from six finals. It earned him a place at the top table, a debut appearance at the World Tour Finals, but a punishing 82 matches had taken their toll, as has been the Austrian’s story before—and since.

His 75th match of 2017 would be one of his most important yet, a chance to reach the semi-finals of tennis’s ‘fifth Major’. But had he overplayed again? For a start, he had needed three-setters to get past both Grigor Dimitrov and Pablo Carreno Busta.

In Thiem’s favour, though, was that Goffin had also played a lot of tennis since missing the entire grass season, to try and compensate for the extended period missed after an ankle injury picked up in an accident at the French Open.

As well as back-to-back titles in Asia, he had been the backbone of Belgium’s Davis Cup run to the final later this month, and he had been wearing knee strapping for the last month.

Now, however, these two friends and rivals, who first met as juniors more than a decade ago, and who often practise against one another, played for a semi-final place, and Thiem had a plan for overturning his negative ratio.

“He’s taking the balls very early, not giving me much time. Especially on this little bit faster surface, it’s tough for me, so I’ll try to be the first to hurt him and not the other way around.”

He was true to his word. The Austrian came out with all guns blazing, pummelling Goffin through a 32-stroke rally to force three break points in the second game, and he converted, held again, and led 3-0. Goffin had lost to Dimitrov in his last match in swift order, 6-0, 6-2, so swift that he was asked whether his knee was the cause. He said not, and he soon proved that there was nothing wrong with his fleet-footed movement.

He finally settled into a hold, then broke to love, courtesy of a double fault from the Austrian. Goffin did it again to take a lead, and served it out, 6-4, in the one of the fastest reversals of fortune this week, 31 minutes.

After a medical time-out to patch up a cut on his knee, Thiem regrouped with a love hold of serve, but Goffin now mixed things up with a serve and volley winner to open his own love hold, and promptly broke Thiem to take the lead.

Thiem’s play from the baseline was ragged, as was his usually formidable serving. From a poor 46 percent in the first set, it was now down to 39 percent, though Goffin threw him a small lifeline with a double fault of his own and a backhand error, to offer up a break point in the fourth game. But he aced and held, 3-1, and broke again.

Now Goffin really had to dig deep, focus, ignore the growing cheers of the crowd who wanted a longer match. Four break points, two double faults, and eight deuces later, he was within touching distance of the semis. He would not even have to serve for the match, breaking Thiem once more with his signature backhand down the line, 6-1.

From Goffin, it was crisp and decisive, underpinned by quick-silver movement, but for Thiem, it was one more end-of-year disappointment. He has now won only three matches—aside from Davis Cup—since the US Open, and will have to go back to the drawing board before next season.

In contrast, the quietly-spoken Belgian beamed as he was reminded that he was the first ever Belgian to succeed at the season finale. First though he had generous words for his good friend.

“It was a pity to play against Dominic, he is such a good friend and a nice guy. It’s never easy to play against a friend. It was tough, I was focused, I knew I had to stay calm and be ready for a tough battle. At the end, I was happy with the way I managed the match.

He then talked of his struggle against Dimitrov:

“After the first match against Nadal, I wasted so much energy, I was not ready for Grigor, but I had a good rest and practice yesterday and was ready for today. I hope I can do the same for the semi-finals.”

In that semi-final, he has the dubious honour of playing six-time champion Federer, a man who has beaten him in all six previous matches. He smiled again:

“I’ve never found a key to beat Roger. Honestly, I don’t know what to do tomorrow. But I’m going to try something different, something that I’ve never done in the past. I will try to do my best to play a better match than in Basel, for sure. In Basel he played well, didn’t miss. [So] I hope that tomorrow he’s not going to play the same match. But I will try something different for sure.”

It is sure to be a treat, bringing together as it does, some of the lightest footwork and movement on one tennis court. The evening session, to determine the other finalist, will be between Dimitrov and Jack Sock.