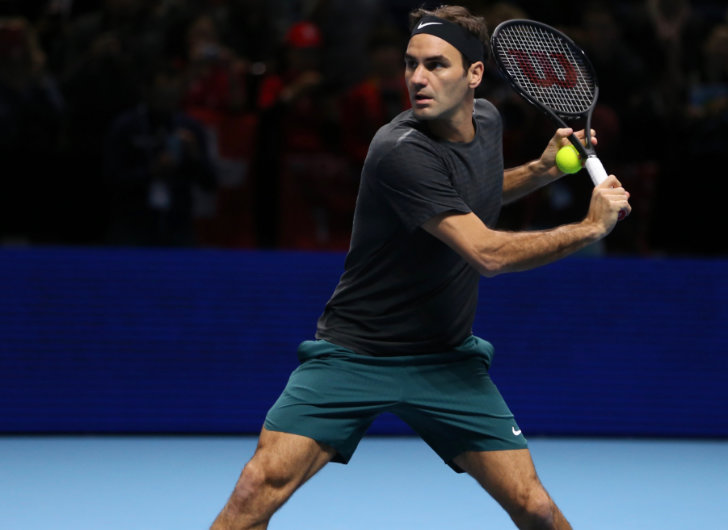 Even Roger Federer’s most devoted fans may not have anticipated that he would advance so swiftly to the knock-out stage of his 15th World Tour Finals.

Certainly, he was severely tested by world No3, the impressive 20-year-old Alexander Zverev, in a three-set, tense and terse thriller that might have gone either way—until Federer asserted himself in the 6-1 final set.

Six-time champion Federer afterwards admitted that he too had to remind himself that he was on the cusp of qualification:

But such was the case—and not just affirm the semis, but top his group. So his third match against the twice-defeated Marin Cilic would bring different priorities to court: the not insignificant matter of ranking points, 200 of them; almost $200K prize money—admittedly a drop in the ocean to multi-millionaire Federer; and a rematch between this year’s Wimbledon finalists, and the only remaining Major champions at the O2.

Cilic was, it might be said, playing for pride: He was trying to avoid his second 0-3 round-robin exit from the tournament. This year, he had twice been beaten in close three-setters after conceding a final-set lead, and was naturally disappointed.

“Yeah, it is frustrating… disappointing in both matches in that third set, putting myself in a good position. But unfortunately, I didn’t close it… So I’m just going to try to regroup, get a little bit refreshed, try to play another good match.”

He had the incentive, then, to go for the win, and the big-strike tennis to get it if he could produce the kind of tennis that ripped apart Federer at the US Open three years ago. They had only played twice since, both times at Wimbledon, and although blisters reduced the big Croat to tears this summer, he almost beat Federer the year before. And how much would Federer want to commit to this match with the crucial ones still to come?

It turned out to be a lot. Considering Federer had break points in the first game, he ended up making hard work of it as Cilic grew in confidence and kept the Swiss at bay all the way to a tie-break. There, the Croat took an early lead, 4-1, Federer closed to 4-4, but Cilic brought up set point with a Federesque volley, and nabbed the set, 7-6(5), with his 20th winner.

Federer looked frustrated, even irritable, but he pulled off a rare serve and volley point to save an early break point—Cilic’s only one of the match—and finally got the break for the second set, 6-4.

Now a calmer, more resolute Federer served up a clutch of aces and broke Cilic to race to a 3-0 lead, and that freed him up to attack the net, on the Cilic serve as well as his own, which drew more and more errors from the Croat. Federer broke again, and served out the match to love, 6-1, taking him to the semis for the 14th time, and with a 3-0 sweep of the round-robin phase for the 10th time.

By the time he came to press an hour later, the smile was back, as he assessed his performance:

“No, it wasn’t easy. It wasn’t easy… I think in the beginning I was slightly over-aggressive on some crucial points rather than maybe being patient. I was able to turn that around late in the second set. Then just had a much better feeling in the third set. Maybe also Marin’s level dropped… But definitely was dangerous there for a while, being down a set and breakpoints beginning of the second set.”

He also referred, on court, to the peculiar situation of playing what is effectively a dead rubber in such a significant tournament:

“I was telling myself to relax a bit. It’s nice to play tennis this freely. I started doing that midway through the second set [but being] qualified on Tuesday evening is kind of weird.”

He will not find out his semi-final opponent until late tomorrow afternoon, when Dominic Thiem and David Goffin compete for that dubious honour. And before Thursday was done, debutants Zverev and Jack Sock would also have to go head-to-head to win the other semi-final place.

The tall German was aiming to become the youngest semi-finalist at the event since Rafael Nadal—also 20—in 2006, and the first German to do so since 2003. Sock hoped to fly the American flag for the first time since Andy Roddick in 2007.

The two had played one another twice before, sharing wins in the space of one month last year in Beijing and Stockholm. The latter match was a close affair, too, just 10 minutes short of three hours.

Since then, both players had come a long way to break the top 10. Zverev had risen from No20 in Stockholm all the way to third in the world. Sock, who was 23rd in the rankings at the time, made the cut for London with just a handful of points to spare by winning the Paris Masters, now at No9.

Zverev trailed only Federer and Nadal in titles won this year, five—two of them Masters—while Sock was one of seven players with at least three titles during 2017. And certainly neither man has lacked self-belief through this season, or in London. 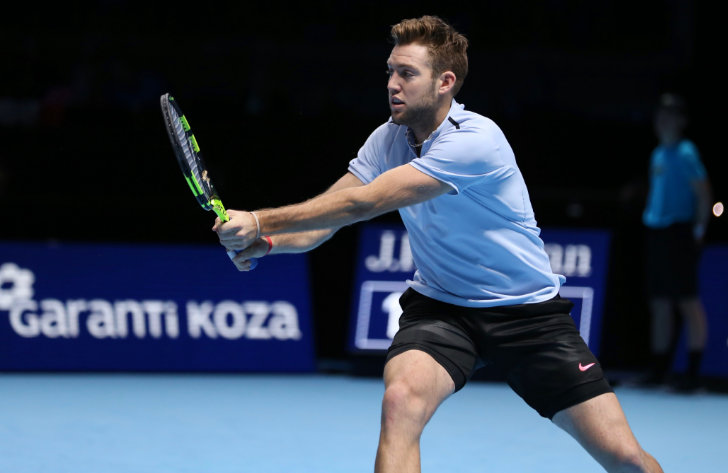 Jack Sock in action at The O2 Photo: Marianne Bevis

The atmosphere was just as big as the temperaments, too, a packed house ready for some fireworks, and they got them early on. Sock was disturbed by the noise, thumped a ball in to the crowd, got a warning. Zverev worked immediate break points, but some superb net play by the doubles-expert Sock saved them.

Then Zverev saved break points, but come the seventh game, Sock did break, and then made Zverev still more frustrated by saving three break points with his huge serve—though both were touching 130mph. Sure enough, the American served it out, 6-4.

Then his concentration went walk-about, Zverev refocused, and the German drew a slew of errors to break not once but twice. Sock got one game, the sixth, but the German strode confidently to the set, 6-1. It looked like a decisive switch, too, when Zverev broke immediately. Sock, penalised again for thumping a ball into the upper gallery, was docked a point, but it cleared his head and he stormed four straight points to break back, hold with a drop winner, and force another break, helped by two double faults from Zverev.

Yet in a topsy-turvy match that reflected just how important this was to both men, the momentum switched again. Zverev broke—playing to the Sock sliced backhand ruthlessly—and held to level, 4-4. But the American would not go away, upped the tempo, switched directions, threw in short balls, and held, and that forced the pressure back on the youngster. Zverev obliged with a double fault and one final error, his 30th.

The young German cut a despondent figure shortly afterwards in press, and pulled no punches:

Sock was more generous of his opponent’s achievement:

“I mean, it’s tough. The guy is 20 years old. He’s played some absolutely outstanding tennis in his career. I mean, can’t even legally drink a beer in the US and he’s three in the world, playing like he is… It could be nerves. It could be other things. Obviously, I’m going out there and kind of letting loose, having fun, trying to put on a show a little bit, just enjoy my time.”

His reward is a place in the semis, having only made it to London for the first time via the very last match of the season. And he goes on to play another 2017 debutant, Grigor Dimitrov, who the American has beaten in their last three matches, including Indian Wells this year, in a tight 3-6, 6-3, 7-6(7).

It is a hard one to call, a year-defining contest that will take one to the final of tennis’s ‘fifth Major’. Don’t miss it, 8pm Saturday.

2pm Federer vs Thiem or Goffin