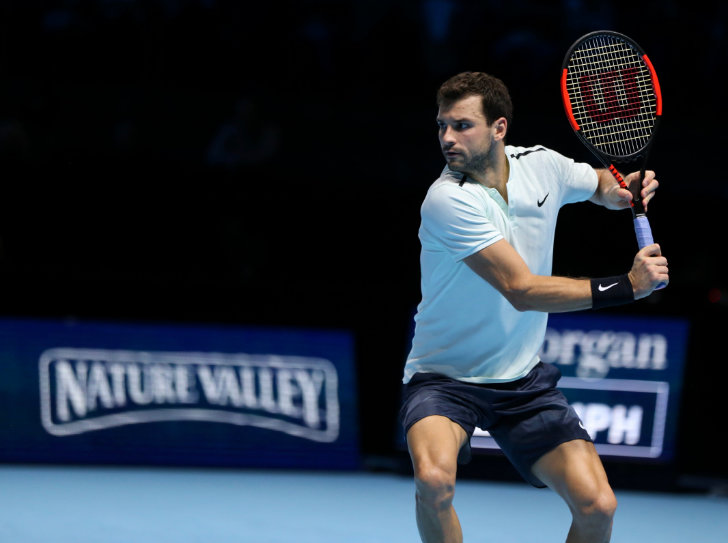 Regardless of the outcome of the inter-generational match between Roger Federer and David Goffin, the tournament this year was guaranteed its first debutant finalist in a decade.

Both 26-year-old Grigor Dimitrov and 25-year-old Jack Sock were among no fewer than five men to have qualified for the Nitto ATP Finals this year for the first time, and were now two of three remaining—a first for the tournament.

Both men had already brought plenty of excitement to the court, and not a little charisma.

The popular Bulgarian, tipped since winning the junior Wimbledon title to be a future No1, had just missed out on reaching here in 2014 when he did indeed make his first deep Major run, to the semis at Wimbledon.

But the elegant Dimitrov and his one-handed backhand struggled to marshal his form and confidence with any consistency—until this year, when everything at last seemed to slot into place. He made another Major semi in Australia, almost beating Rafael Nadal in a five-set, five-hour thriller, and won three titles, including his first Masters in Cincinnati.

And he was saving the best for last, playing free and confidently to drop only two games apiece to Goffin and Pablo Carreno Busta. The style of his victories, added to his gritty three-set win over Dominic Thiem, was such that he looked a reasonable pick for the title.

He first had a formidable barrier, however: Sock had beaten Dimitrov in the last three of their four matches, coming back from a set down and match-points in both Montreal 2015 and Indian Wells this year. Dimitrov’s only win, back in 2014, was a similarly close affair, this time with Dimitrov coming back from a set down—and he was arguably in the same form now as in that impressive season.

However Sock’s store had risen dramatically during 2017. He began with two titles, a semi-final run at Indian Wells, and the quarters of Miami, and after a flat summer, he surged from a ranking of 23 three weeks ago to nab the last qualifying place in London with the Paris Masters title.

He had been tested here, as he had been time and again in Paris, and came through two three-setters against Alexander Zverev and Marin Cilic to finish second to Federer in his group.

And like Dimitrov, his tennis had been by turn explosive and creative. He has a huge serve and forehand, but also one of the best drop shots on the tour, and can chip and charge like the doubles Wimbledon champion that he is. And what the extrovert Sock does not lack is confidence:

And on his chances of beating Dimitrov to the final?

“I mean, why not? He’s playing deep into tournaments almost every week, really establishing himself in the top 10, or top five. But I’m playing with a lot of confidence as well… You never know what can happen.”

What happened was a quick break by Dimitrov, and a 3-0 lead. Sock looked tight, but once his forehand loosened up, he began to pressure the Bulgarian. It showed in the fifth game, Dimitrov double faulted, and Sock broke back. All at once, the Bulgarian looked the tense one, double faulted again, and gave up a break as his error count rose. It left Sock, unexpectedly, to serve out the set, 6-4.

The second set began in exactly the same way, a quick break for 3-0, but this time, Sock seemed to tire, lost his way completely, and Dimitrov made hay to break twice more and deliver a bagel 6-0 set: He had won 24 points to Sock’s nine and made only four unforced errors.

Would he keep up the surge as he had in his previous two matches? The decider was a closer, and more high quality affair, with both now playing their best tennis, testing and probing with power and angle. They edged without a break to the seventh game, but then Dimitrov found an extra gear and tested Sock through a string of deuces. The American double faulted to offer up break point, and saved it, but a searing forehand down the line from the Bulgarian converted the second, 5-3.

Dimitrov would attempt to serve it out, and perhaps then the memory of those multiple match points in their last two meetings rose to the surface. Sock would have to save more here, as he faced 40-15, and sure enough he pulled Dimitrov back to deuce.

Sock worked two break chances, but this time, Dimitrov would not waver, and forced one last error to seal the win and a place in the biggest final of his career.

Even without the title, Dimitrov is assured of a rise to a career-high No3 in the rankings, behind only Nadal and Federer. No wonder he was lost for words when interviewed straight after the match for Sky.

“I don’t know what to say: that last game took a lot out of me. Jack is an unbelievable player. That forehand gives me so much trouble, I’m not going to lie. He was playing so well but my belief was really good today.

“I know that wasn’t my best tennis but those are the ones I really like to win… You have to control your nerves to win matches like that, and I didn’t let any negative thoughts into my head.”

And he is unlikely to have negative thoughts when he faces Goffin tomorrow, either: He trounced the Belgian in their round-robin just days back. But what is guaranteed is that the fifth Major of the year will end up in the hands of a tournament debutant. The last man to reach the final in his first appearance was David Ferrer in 2007—and the last man to win at their first attempt was Alex Corretja, way back in 1998.

Tomorrow, it will be Dimitrov or Goffin who writes his name in the record books.