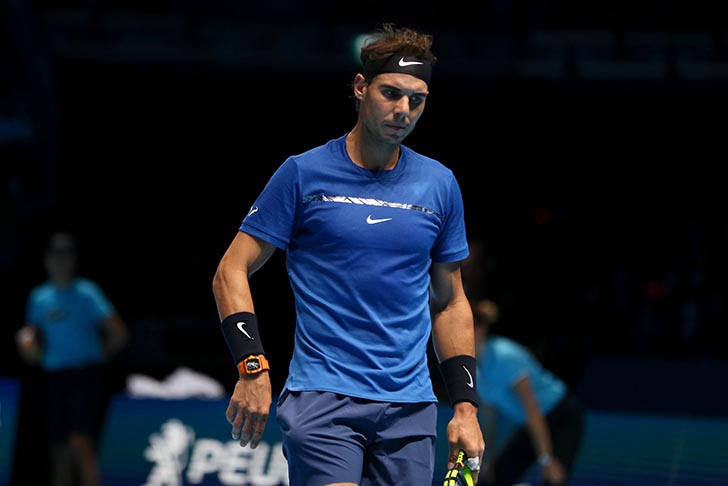 There is not much that Rafael Nadal has not achieved in tennis.

With 75 singles titles, including 16 Majors, 30 Masters and two Olympic gold medals, plus a share in Davis Cup glory with his Spanish compatriots, he has stood out from the crowd.

It began more than a dozen years ago when the teenager with the cropped vest and pirate pants emerged as the complete clay court tennis player to win the French Open and both the Monte-Carlo and Rome Masters in the space of around six weeks in 2005.

It was impressive, but all the more so because, he went on to win the hard-court Masters in Canada and Shanghai, and reach the final in Miami, too.

He quickly rose to No2 in the world, where he hit the glass ceiling of Roger Federer, but having got the measure of Federer with his vicious left-handed forehand and spin, he got the measure of the Swiss on Wimbledon’s grass too, and that earned him come August 2008.

But Nadal hit many bumps in the road, too, largely as a result of repeated knee injuries and a physical, never-say-die approach to his sport. He missed Majors along the way, lost rankings, but recovered and returned.

And when he ended his 2016 season prematurely with a serious wrist injury and slipped to No9 by the start of this year, the then 30-year-old had a mountain to climb. But climb it he has. He won his 10th titles at Monte-Carlo, Barcelona and Roland Garros. He won his third US Open title, made the final of the Australian Open, Miami and Shanghai, and returned to No1.

All that ensured a 13th qualification at the World Tour Finals, and the end-of-year No1 ranking for the fourth time, the oldest man ever to do so.

But amid all these prizes, all this achievement, Nadal has never managed to win the year-end tournament, the last big prize of the year, the ‘fifth Major’. But then his only indoor hard-court title came 12 years ago, when the Madrid Masters was held—also in late autumn—indoors.

It is fair to say, then, that this tournament—played at the end of what is always, in Nadal’s case, a packed and gruelling schedule—has not been easy. He would like, he has not been afraid to say, that it be played on clay once in a while, though it is an argument hard to justify when there is no indoor hard-court Major in the tennis calendar, nor, as Federer is quick to point out, no grass Masters. Swings and roundabouts.

But this year, Nadal looked in the best shape possible, the best position possible, to fill the gap. Just as Federer has proven, an enforced injury absence has its up-side: time for training, time for rehab, and time to revitalise the winning mentality. And Nadal withdrew from Basel, and then played only two matches at the Paris Masters before pulling out.

So the sore knees had time to rest, and he assured media last Friday that he had everye intention of playing here, for he really hoped to win the missing one after two finals and three semi-finals.

On paper, the draw was on the Spaniard’s side, with two debutants in Grigor Dimitrov and David Goffin, plus Dominic Thiem, who played here for the first time last year. Nadal’s record against the three was 17-3 head, including 8-1 this season, and the only loss came to Thiem at the Rome Masters.

His first challenge came from Goffin, ranked No7, and with a 0-2 record against Nadal, both losses this year in straight sets. Those contests were, though, on Nadal’s beloved clay. Goffin bounced back from an accident at the French Open this year, missing the whole clay season, to reach a career high with back-to-back titles in the Asian swing—on hard courts—and a semi-final run indoors in Basel.

He played one match here last year, as an alternate, and got beaten 6-1, 6-2 by Novak Djokovic. But he was now a more confident player—nimble, tactically smart, and hoping to fly the flag for Belgium, the first qualifier from that small nation in the history of the tournament.

And the slight Belgian took advantage of a slow-from-the-blocks Nadal, breaking the Spaniard in the third game and holding for a 3-1 lead. He looked assured, as though he believed, but this was Nadal, and despite an uncharacteristic bunch of errors, he broke back, 3-3.

Goffin had another opportunity with a break for 6-5, only to lose control of his serve completely: not a first serve into play and two double faults handing Nadal the break back on a plate. It would be a tie-break.

This too was poised, 3-3 at the change of ends, but they would not change ends again: Goffin, with 15 winners to six from Nadal, grabbed the lead, 7-5(5).

The second set would be even tighter, as each kept their winner to error ratio much closer, but Goffin’s serve was precise and kept him in the lead for seven games, as Nadal dug in. Then the Belgian struck in the eighth game with a couple of crisp down-the-line winners. On break point, Goffin pulled off a return of serve forehand, and served for the match, 5-3.

But just as in the first set, Goffin almost froze on the edge of victory, Nadal took advantage with two backhand winners, and Goffin double faulted on break point.

And like the first set, Goffin had another bite of the cherry, a break point, and this time a match point courtesy of a backhand winner down the line. But pumped by adrenalin, he hit a forehand wide, and Nadal held with strikes to the lines and a huge “Vamos”!

But if that was a lost opportunity for the Belgian, it would get worse. Goffin took Nadal to 0-40, three more match points, as errors rained from the Spaniard, but three times the No1 replied as only he can, with winners, and it went to a tie-break. And this time, Goffin did not get a look in, with Nadal firing off both wings: He levelled, 7-6(4).

In this topsy-turvy encounter, Goffin regrouped and again got the first break at the third attempt, 2-1. Now it was obvious that Nadal’s knee was causing him trouble, especially bending low or changing direction. But he is a fighter of the first order and even after going down two breaks, 1-4, he let fly with a couple of shots to pressure Goffin for one break back.

Would the Belgian waver again? This time no. Nadal could not respond to some solid serves, and Goffin closed out the 2hr 37mins match with his 14th ace, 6-4.

So once more, the Nadal knee played its part in the Spaniard’s London drama. Yet even in such disappointment, he stopped to sign autographs on his way out. And out he was, as he made immediately clear to the media:

“No, I am off. My season is finished. I had the commitment with the event, with the city, with myself. I tried hard… I tried to be ready to play. But I am really not ready to play, no? I really fought a lot during the match, but knowing that probably it was a big chance to be the last match of the season. That’s what it’s going to be.”

Goffin—well, he struggled to find the words for this first win in the tournament and his first over Nadal. He told Sky Sport:

“It was a tough fight until the end. Rafa is one of the strongest players mentally on the tour. I am so happy to finally find the key to win this match. It is so special to do it here.

“I don’t know how I picked myself up after losing four match points. I just wanted to keep going and try to enjoy every point. But it was a really special tonight. Thank you for a great atmosphere, and I look forward to coming back in two days.”