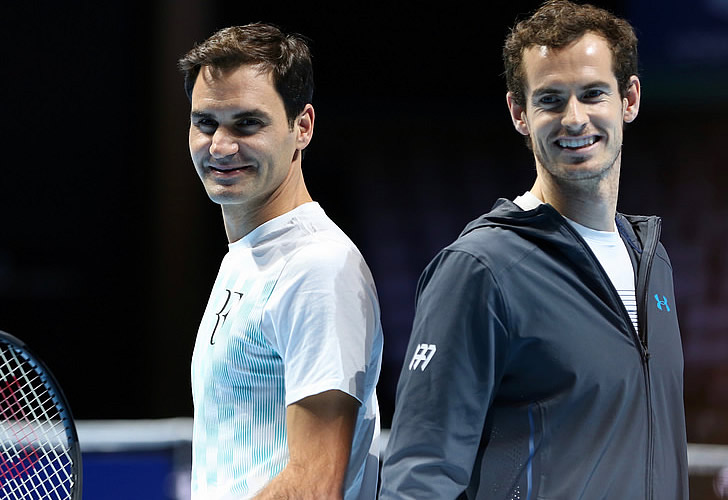 The 11,000 who packed out the Glasgow SSE on Tuesday night could not have wished for more from the two tennis players who took to court in something approaching a carnival atmosphere.

They don’t come much bigger in tennis, or any sport, than 19-time Major champion Roger Federer, and he had taken time out from his preparations for the imminent World Tour Finals to come to Scotland for the first time in his career.

In the midst of that gut-busting effort to the top, he played the inaugural Andy Murray Live for Unicef—he is their British ambassador—and a local charity. This was the second, and he had scored big by attaching Federer to his cause.

It had been helped, of course, by Murray doing the same for the Swiss in Zurich in April. That aside, for the 36-year-old Federer to manipulate his carefully-tailored schedule at this point in the calendar—with his eyes, by his own admission, firmly set on winning a record seventh World Tour Finals title—was nothing short of coup. And that despite Scotland’s notoriously chilly, damp weather.

And boy, did the man who is so cool, calm and collected on court deliver. After an afternoon tennis clinic with 30 or so amateurs, led by Murray’s mother, followed by a string of media commitments, he even volunteered mid-match to don a kilt “if one can be found”.

It took around a minute for one enthusiastic spectator to remove her own kilt and wrap Federer in tartan.

He embraced the moment with brio: first swinging his hips, then his legs, to roars from the crowd. He proceeded to win his serve anyway.

The half dozen balls that are normally in play for matches were repeated reduced to two or three as fans scooped them up when they bounced into the crowd. Murray handed his racket to a young man sitting courtside, who gamely—and with some ability—played a couple of points with Federer.

Andy’s brother Jamie, prompted in an interview between games, said there was not much advice he could give his sibling in the face of Federer breaking in the fourth game and going on to win the first set, 6-3.

“[Roger] may never come to Scotland again, so make the most of him!”

But of course, aside from fun and games, from the famous visitor, and from a burgeoning purse for Murray’s charities, there was a serious side to this particular match. Murray had not played since his painful departure from Wimbledon, having picked up a hip problem at the French Open.

He assured everyone in the press conference before the match that his recovery was going well.

“I hope I’m [in Australia]. Things have been going pretty well in the rehab, but you never know. You take each week as it comes. You have setbacks. I’ve been training for a few weeks now. Some days I’ve felt great, some days not so good. But I’m getting there. I’ll come back when I’m ready and when I’m 100 percent fit.

“It may not come immediately at the beginning of the year, might not play my best tennis straight off the bat. I believe in the work I’m doing and I have been hitting the ball very well in practice, but there is a difference between 75-80 percent practice and going out 100 percent for two-three hours on a match court. Until I do that, I can’t be certain, but I think I’ll be fine.”

So there was maybe some consternation that, as he walked to the baseline to begin his match, there remained a distinct hobble in the Murray gait. But while he continued to look uncomfortable between points, he certainly moved energetically in play, showing off his remarkable defensive abilities, showcasing his familiar touch on drop shot and lob, and it earned him the second set, a mirror of the first, 6-3.

So often in these exhibition matches, it is the home hero who comes through in the end, but Murray’s rustiness, combined with Federer’s form—and he did Murray the courtesy of playing his usual attacking style—saw the world No2 claim the championship tie-break set, 10-6.

Perhaps in the end, though, it was the hat that made the difference. Murray ended the match in a joke “See you Jimmy” tam o’shanter-and-wig affair. Federer afterwards admitted that, yes, he had planned it, adding: “It suits you!”

Murray added, with a wry grin: “Well it covers up my bald patch, my ever-thinning hair.”

There were, then, on-court interviews, an award ceremony for another of Murray’s initiatives to encourage high-tech innovation among college students.

It was agreed that, yes, they needed to get away: Federer had a plane to catch, training to do, but what was not mentioned was one other pressing matter—which had been kept firmly under Murray’s hat.

Twelve hours later, it was revealed that the Scot’s wife had given birth to their second daughter, believed to be just days before. So he, too, had reason to catch a flight south—the very best reason—though he had a doubles match to play first, partnered by his brother and against Tim Henman and Mansour Bahrami.

He lost that too, but Murray proved himself a winner through and through this week, as he has done over the years with his many charitable efforts. He has not won the ATP’s Arthur Ashe Humanitarian Award (in 2014) for nothing, and the same might be said of his opponent: Federer has won said award twice.

These two, indeed, have many things in common, even if their respective senses of humour are very different: Federer the joker, the extrovert, the one whose confidence is big enough to let him play the fool when there are no titles at stake; Murray the quieter one, who has only slowly grown in confidence, but whose dry humour has gradually won over a huge following.

Both are family men; both have, from the earliest stages of their careers, thrown their weight into campaigns and philanthropic activities; both have served their sport on the Players’ Council; they ‘get’ each other.

So Murray’s year on court may have been a tough one after his headline-making 2016, but he has the example of Federer to encourage him—and his words of experience:

“My big advice is just to get healthy again, pal. That’s it. Take your time, however long it takes. When you come back you want to be 100 percent… it’s wise and worthwhile to take the extra week, extra month, whatever it might be, because I’m sure Andy has a lot of years left. There shouldn’t be a hurry. You need to have goals but sometimes they need to be postponed.

“But it’s nice to see you back on the court… it’s just nice being on the court with you again. I’ve missed you, man.”

And the Swiss backed it up with a parting overture:

“I love teaming up with Andy… I hope we can do this again.”

Ditto 11,000 in Glasgow, even if one special woman in south London hopes her husband schedules it better next time.