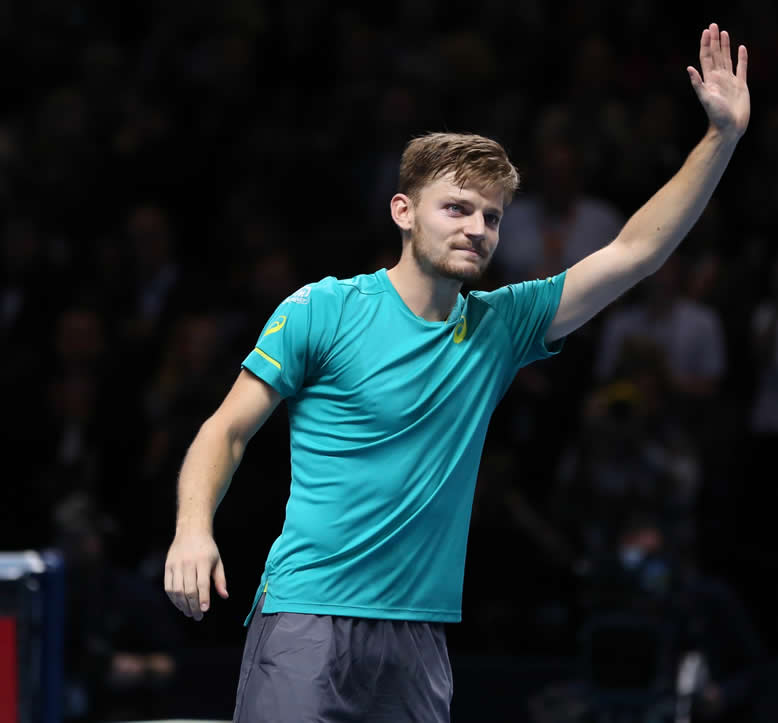 It has become no big deal for Roger Federer to be faced with a player who was just 10 years old when the Swiss first played in the season-ending finale in 2002, and just 11 when he won the first of his six titles a year later.

And now aged 36, it was not just David Goffin who was 10 years Federer’s junior, but all three fellow semi-finalists: Grigor Dimitrov is 26, Jack Sock the youngest at 25.

Once again, in London, it was a battle of the generations for the Swiss, and a battle that the apparently ageless Federer had yet to lose. None of the three semi-finalists had beaten him—in a joint tally of 16 matches.

But this year, the World Tour Finals marks something of a watershed, a year when new faces have made their mark, and when the 90s generation has made its mark. The change in the scenery at the O2 may have been hastened by the injury problems of 30-somethings Novak Djokovic, Andy Murray, Stan Wawrinka, Tomas Berdych, and more, in the latter half of 2017, but that has given new players with new styles the chance to impress a world of new fans.

‘The Three’ were all debuting in the championships, as were half the players to qualify this year. When Pablo Carreno Busta took the place of the injured Rafael Nadal, that took the tally of players born in the 1990s to six out of nine, and the number of debutants to five.

Yet Federer’s enthusiasm for the tournament, the buzz, and the challenge, appeared to be as vibrant as that of his fellow semi-finalists. Asked about his memories of playing the first of 15 years at the event, he talked as though it was yesterday:

“In the beginning, it was like being a kid in a candy store, sharing the locker room with legends of the game, seeing them prepare, being able to practise with them, playing doubles with or against them. Special times.

“When you come out on the tour later on, it’s different. You play the next generation, but now you’re the older guy and they’re the younger guys. It takes some getting used to. But I enjoy it now in a different way. I think it was more exhilarating when I was younger because everything was new, it was fresh. And today I know most of it, I’m very calm. But there’s a deeper understanding of what I’m going through. So maybe the satisfaction is, when I do win… I know it’s not normal maybe to be here, so I appreciate it even more so at this age.”

And he was the oldest player to qualify for the tournament in its 47-year history, but in two tough tests through the round robins, he had looked tense, even irritable, with his level of play, with missed opportunities.

However, the problem for Goffin was not just his opponent’s experience but also his reputation—especially here: In this his 15th participation, Federer has fallen short of the semis only once—when he had a back injury in 2008. Aside from having the most titles, he has made the most finals, 10, and won the most matches, 55.

What is more, having not played last year after a six-month absence to rehab from knee surgery, he had enjoyed a stunning season, rising from No17 to within touching distance of No1. He arrived in London with a tour-leading seven titles, including two Majors and three Masters, and notched up a 14-1 record over top-10 players—his best in 13 years. And among those he had beaten this year was Goffin.

The nimble Belgian, here at a career-high rank despite an ankle injury at the French Open that caused him to miss the entire grass season, certainly proved his worth with two early finals in February and back-to-back wins in Asia, followed by a semi defeat from Federer in Basel.

The Belgian, too, had never made a secret of his admiration for Federer, had put posters of his idol on his bedroom wall when the Swiss was barely older than the Belgian is now. But the admiration was mutual, and began when a Goffin who looked even younger than his 21 years faced the Swiss for the first time in his first Major main draw—having come through as a lucky loser into his seventh match of the tournament, the fourth round.

And he took the first set, before Federer edged him 7-5 in the second, and went on to win in four sets. But the Swiss was impressed by the slight man’s touch, variety and, above all, footwork. And it is Goffin’s quicksilver movement that has continued to impress.

He went on to take a set in their second Basel meeting, too, but he smiled ruefully when asked about his chances of causing an upset in London:

“I’ve never found a key to beat Roger. Honestly, I don’t know what to do tomorrow. But I’m going to try something different, something that I’ve never done in the past.” 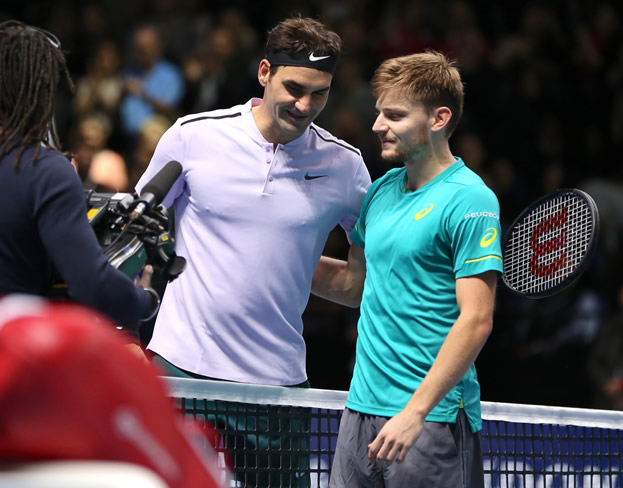 He had, despite worrying taping to his knee, already beaten Nadal in his opener here, a rollercoaster match that wore the world No1 and his own fragile knee down. And he had made the higher-ranked Dominic Thiem look sluggish in a straight-set trouncing.

But in the first set of this semi-final, it was again Federer who imposed his all-court prowess on the Belgian, grinding him down in an eight-minute first game, and converting his fifth break point. He faced deuce himself, but held and broke again for a 4-1 lead and fired off two love holds to take the set, 6-2, in half an hour.

This had the look of another Goffin defeat written all over it, but just as quickly as Federer had broken in the first set, Goffin broke in the second, and held for 3-0. This was, it transpired, his plan: to step in, go for his shots, even attack the net. He serves with admirable accuracy and variety for a man of one-metre-80, and Federer found himself trying to defend but failing.

The Swiss made deuce in the fifth game, but a couple of aces, and Goffin kept his lead, defended a break point for 5-2 and held with ease for 6-4.

And should there be any question about Goffin’s nerves or concentration, they were swiftly banished as he broke the failing serve of Federer in the third game. Not only was the Swiss first delivery now missing half the time, but Goffin’s flat and crisp returns were tearing open Federer’s defence.

The former champion roared himself on at the chance of a break back in the fourth game, but he failed to convert—as he had nine times through the match. Goffin did not blink, and with just one point more than Federer as he stepped up to serve for the match, he swept to victory with two aces, 6-4.

The Belgian let his racket drop to the court and turned to his box in disbelief, before heading to the net for a warm embrace from his idol. Federer afterwards revealed that he had said to Goffin.

“I think today he played so nice that he deserves to be in the finals… that’s what I told him at the net… I’m very happy for him, he’s a great guy, I like him a lot.”

Asked whether he noticed a change in Goffin’s tactics, as the Belgian had promised, Federer simply smiled: “Yes, he played better.”

For his part, Goffin said:

“I have no words. I cannot describe how I’m feeling. So much joy, so much happiness.”

He explained how he had successfully switched the momentum in his favour—and Federer had scored 13 winners to the Belgian’s three in the first set:

“Of course, it was not easy. When I started, I was a little bit nervous. I started to be just solid. But against him it’s not enough to be just solid, because it’s the perfect pace for him, he can do whatever he wants.

“Then I wanted to change something because I was nervous. I started to feel the ball better at the end of the first set, so I wanted to be more aggressive. As soon as I had the chance to go for the shot [I did]. It paid off. I started to serve well. My forehand was going much better. I was really aggressive. I came to the net. Yeah, when you see me at the net, it is something good [smiling].”

And he had come to the net almost as often as Federer had, 19 times to 20. If this is a new wrinkle in Goffin’s game, it can only be to the good, a tactic that will help him to break open his opponent when interlaced with his piercing, accurate baseline game. And then there is his ever-improving serve: Goffin produced the same number of aces as Federer—one of the best servers on the tour.

So Goffin’s career best year continues onwards to his biggest final, his highest ranking of at least No7, and two more special accolades.

He became the first player to beat the top two players in the tournament since Nikolay Davydenko did the same in 2009—and the Russian went on to win the title. And Goffin became only the sixth player ever to beat both Federer and Nadal in a single tournament, the last being Djokovic in 2015. Now that is elite company.

Goffin will face either Dimitrov—who has dominated their rivalry, and beat Goffin hollow in their round-robin match—or Sock, who he has beaten in all three meetings, most recently in Basel last month. He said, in his quiet and modest way:

“I hope to play the tennis I played today. I’ll try to be more aggressive, also go for the shots, and, yeah, go for the trophy.”