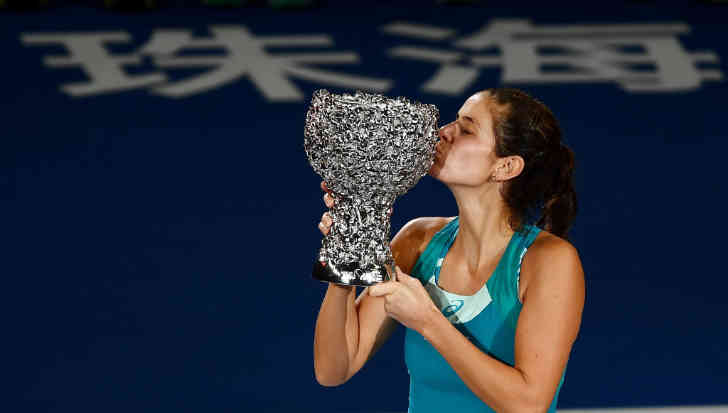 Following the victory of Julia Goerges over Coco Vandeweghe to claim the 2017 Hengqin Life WTA Elite Trophy, the last two women standing this season both reached career-high rankings. However theirs is just one big ranking story in a year that celebrated a clutch of new No1s and Major champions.

After claiming the biggest title of her career, the 29-year Goerges will end the year as No14, an achievement made all the more memorable by the presence of her idol, countrywoman Steffi Graf, who was part of the trophy presentation party in Zhuhai.

“I think for me it was a special moment to win my biggest title and receive the trophy from Steffi and share the moment with her, and even get her in the picture. It’s very rare. I know this. I think that’s probably worth more than millions.”

The 25-year-old runner-up, American Vandeweghe, reached No10, having broken the top 20 for the first time after the Australian Open, reaching the quarter-finals of three Majors, and making the semis of the US Open.

Zhuhai also marked a new high for Ashleigh Barty, who at age 21, rose to No17 on the back of a strong run to the semi-finals. Indeed, Barty enjoyed one of the biggest rises of the year, having missed most of the previous two years. She opened 2017 ranked 271 in Brisbane and went on to reach the first three finals of her career, winning in Kuala Lumpur.

And despite a round-robin exit in Zhuhai, Magdalena Rybáriková, who made an outstanding run to the semis at Wimbledon this year, rose to a new high of 20. Her surge back, via four ITF titles, has been all the more impressive because she had slipped to 453 after wrist and knee surgery.

The 31-year-old Shuai Peng, who earned the wild card in Zhuhai, did not make it past the round robins but it has still been a memorable year for the Chinese woman, a rise from 109 to 27 after coming back from spine surgery last year. She won the title in Nanchang and made the final in Taipei City too.

Venus Williams has become the oldest woman in the top 10, age 37, and finishes the year in the top five for the first time since 2011. She first rose to No1 in February 2002, and this is the 13th time she has finished in the year-end top 10.

Caroline Wozniacki’s year at No1 ended in January 2012, and with the biggest title of her career at the WTA Finals, she rose back to No3, her highest year-end ranking since.

The year of many No1s

It proved to be an extraordinary year for the handful of women who contested the ultimate ranking place through much of the year. Angelique Kerber, having risen to the top for the first time last autumn, began 2017 at the top and reclaimed it from an absent Serena Williams until Wimbledon.

But through late spring and early summer, Simona Halep was on the cusp of claiming the No1 spot on several occasions—most heartbreakingly at the French Open where she was pipped to the post and the title by Ostapenko.

Instead, it was Karolina Pliskova who, despite an early loss at Wimbledon, took over from Kerber, and she ends the year in the top five for the first time.

Then Wimbledon champion Garbine Muguruza enjoyed a month at the top after the US Open, but at last, though, Halep’s doggedness earned its reward. The added a final run in Beijing to her Madrid title and finals in Rome, Paris, and Cincinnati, and that sealed the deal.

Halep now remains top dog until 2017—with a lead of just 40 points over Muguruza—which marks a tour-leading top-five finish for the fourth straight year.

· 18-year-old Czech Marketa Vondrousova jumped from 376 to 67, and won her first WTA title in Biel;

· Mona Barthel bounced back from injury in 2016 and a ranking of 183 to reach 48, and won her fourth WTA title in Prague in April;

· Natalia Vikhlyantseva made two Premier semi-finals in St Petersburg and Moscow and made her first final in ‘s-Hertogenbosch to rise over 100 places to 54;

· Ons Jabeur became the first Arab woman to make the third round of a Slam at Roland Garros, where she was junior champion in 2011—and rose over 100 places to 88;

· Elise Mertens was a surprise champion as a qualifier in Hobart in January, then reached another final in Budapest and three further semis, rising to No35 from 120;

· Zarina Diyas rose to 66 from 148 after undergoing wrist surgery, and won her maiden title in Tokyo in September.