Gordon Reid, Alfie Hewett, and Andy Lapthorne are all hoping to secure a slice of British history at Tennis Wheelchair Masters 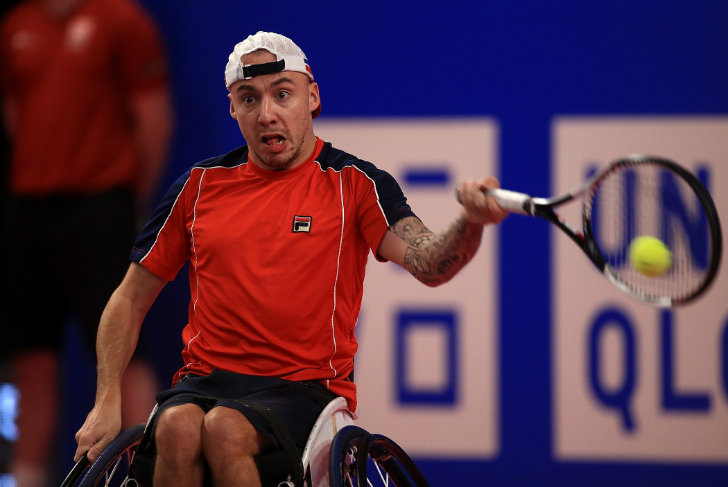 Rio Paralympic finalists Alfie Hewett and Gordon Reid, who together won the Wimbledon doubles title this year, have made British tennis history by guaranteeing the first ever British men’s singles champion at the NEC Wheelchair Tennis Masters, the sport’s year-end championship for the top singles players.

More history could also be made on Sunday’s after Andy Lapthorne reached the NEC Masters quad singles final for the third time. Lapthorne now faces nine-time champion David Wagner of the USA in the final. Victory for Lapthorne would mean he overtakes Wagner for the year-end No1 quad singles ranking.

World No2 Hewett produced what he described as his best performance ever to beat two-time defending champion Joachim Gerard of Belgium 6-0, 6-2 in his men’s semi-final at Loughborough Sport Tennis Centre. Hewett’s win ended Gerard’s 13-match winning streak in the NEC Masters dating back to the first day of the 2014 tournament.

“I’ve had a very tough week, both mentally and physically and to have a performance like that, I’m quite shocked to be honest. It’s probably the best match I’ve ever played, and to do it at this stage of the season and with today being such a big match and going through to the final, I couldn’t be happier. You have days when you just feel unstoppable, and today was that day—and to have guaranteed a British winner on home soil is very special.”

Reid had come from 5-1 down, and later three match-points down, to beat Argentina’s world No1 Gustavo Fernandez in the last day of round-robin pool matches on Friday.

The Briton, who is currently world No3, said:

“I’m really happy with the performance today. It was a close match and Shingo was playing really well, so I’m really glad to come through.”

World No2 Andy Lapthorne secured his place in the finals with a victory over South Africa’s Lucas Sithole, 6-0, 6-2. He will face USA’s David Wagner after the World No1 cruised through his semi-final clash, beating Heath Davidson, 6-1, 6-0.

“That was one of the hardest matches of my life, especially mentally. I’ve only reached the semi-finals in this event in the last few years and I find semi-finals hard, I make no secret of that. Lucas is very hard to play, he plays in spurts, and I’m really pleased to give myself the chance to show what I really can do out on that court.

“This is what we play for, so to even be in this position is amazing. I’m one match away from becoming world No1, and whether that happens or not, I’ve had a great year. David is the greatest quad player there’s ever been, no arguments. So to get the chance to play him for the world No1 spot is amazing.”