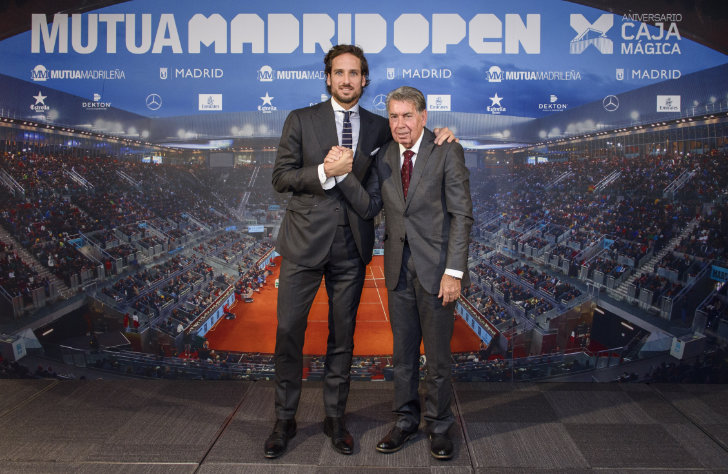 One of Madrid’s most famous sporting sons, Manolo Santana—a four-time Major singles champion and world No1 during the 1960s—will mark his 80th birthday next May with a celebratory handing over of the reins of his home tournament to Feliciano Lopez.

Santana will become the tournament’s Honorary President at a ceremony in the arena that bears his name in the magnificent Caja Mágica, when Lopez, who became Assistant Director this week, will take over as Director*.

The 79-year-old Madrileño said of the news:

“The Mutua Madrid Open is and always will be my home. We put a lot of effort into getting this tournament off the ground and I will always be working to help it grow.

“I am really happy that Feli is joining the team, he is a wonderful addition, and I will try to teach him as much as I can. He knows the tournament very well because he has played in it every year.”

Indeed Lopez is the only player to have taken part in all 16 draws in Madrid, from its 2002 birth as an indoor hard-court tournament during the autumn until its current iteration on the red clay of May. However, the 36-year-old left-hander who now lives in Madrid has given nothing away about any future retirement plans—and with good reason.

Lopez won the biggest title of his career this summer on the grass of Queen’s, having also made the final in Stuttgart the week before. And arguably, he has enjoyed some of the best form of his career during his 30s. Since winning the Eastbourne title in 2014, backed by a final run at Queen’s, he has gone on to win two more titles from six finals, reach the semis at two Masters, and make his first quarter-final at the US Open.

He rose to a career-high No12 in the rankings just two years ago, and last year, he broke new ground with a Major title in doubles, at the French Open, and backed it up with a runners-up trophy at the US Open.

Lopez has produced good form and consistency over the long haul, too. His aggressive serve and volley game, a rarity among today’s Spanish players, has ensured he escaped serious injury problems through most of his long career.

“When you’re young, you try to develop your game in the best way possible, no? I knew God gave me this serve, so I have to take advantage of it. Since the first time I played here on grass, I knew this was the way I have to play. I mean, what else I can do? This is definitely how I have to go on the court and play, be aggressive, try to come in, put pressure on the guys.”

Now, he trails only Roger Federer—whose aggressive, forward-moving tennis has also helped to keep him spritely at 36—in consecutive Majors played, 63 of them. Should Lopez play the Australian and French Opens and then his most successful Major, Wimbledon, he will outstrip Federer’s record 65.

But the Spaniard clearly relishes the prospect of stepping into Santana’s shoes:

“I cannot describe how excited I was to receive the call from Manolo and Gerard [Tsobanian, tournament CEO]. I can still remember when Manolo gave me a wildcard to play in the first tournament in 2002. That was when I realised that I could take on the best in the world (and I came close to beating Agassi!).”

Andre Agassi went on to win the first Madrid Masters title, but escaped by the skin of his teeth against the young Spaniard, 7-6(6), 6-7(8), 7-5. Agassi converted the only break point in the entire match.

“I have a very special bond with the Madrid Open and I feel very lucky to work at the tournament. Today I feel as if Manolo has given me another wildcard to work with him and I hope to be able to make the most of it.”

On the tournament, he added:

“As time has gone by, this has become one of the best tournaments on tour and one of the most valued by the players. It will be a huge responsibility to make sure that their legacy continues for many years to come.”

The tournament has certainly made its mark since that inaugural playing in 2002, though not always for the tennis itself.

The trial of blue clay in 2012 had some of the leading players—Rafael Nadal among them—threaten to boycott the tournament if it did not revert to the traditional red clay of Rome and Roland Garros: It was duly changed back. Much was also made of the introduction of models as ball-girls—and some matches still feature glamorous adult ‘ball girls’ for the feature men’s match and ‘ball boys’ for the feature women’s match.

Tennis takes off in Madrid between 4 and 13 May 2018, and naturally the preparations are already under way. But amid all the usual top-flight tennis, one date will stand out, 10 May: Santana’s birthday.

*subject to the approval of the ATP/WTA boards