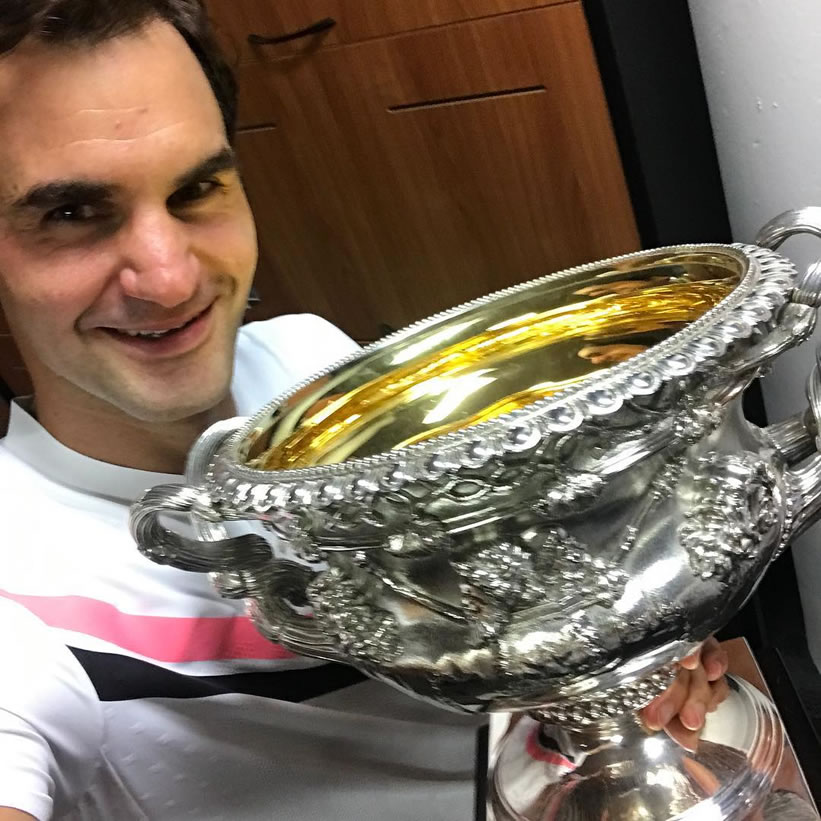 They had been here before, these two Major champions: Roger Federer and Marin Cilic had faced each other on the biggest stages in tennis, and although defending Australian Open champion Federer had certainly built an edge along the way, he had also faced stern tests.

Cilic beat Federer in swift and devastating style on his way to his US Open title in 2014. In 2016, he led Federer by two sets and had three match points in the quarter-finals at Wimbledon. At the World Tour Finals only two months back, the Swiss had to come back from losing a first tie-break set.

And the Croat was playing the same kind of tennis in Australia as he had in winning his Major in New York, beating the likes of No10 seed Pablo Carreno Busta and then Rafael Nadal.

Perhaps it would help Federer that he had spent less time on court to reach the final showdown—six hours less.

Perhaps it would help Cilic that he had enjoyed an extra day’s rest since his dominant semi-final win over a fading Kyle Edmund.

Who might profit from the last-minute decision to close the roof against Melbourne’s heat and humidity? Some thought the Swiss, others the Croat.

One thing was certain: there would be butterflies in the hearts and heads of both men as they prepared for their last match. And most were of the opinion that this would be another close one that could go either way, that Federer’s pursuit of his 20th Major would be hard won or hard lost. They were not wrong: It was a thriller.

In the early stages, it looked as though Cilic would allow nerves to determine the result. Federer opened at full throttle, a backhand pass here, a forehand lob, and Cilic smashed into the net for a break in the very first game.

In the blink of an eye, Federer had a love hold, another break, and had held for 4-0. Cilic could not get his formidable first serve going, and Federer was on the offensive. Two more easy holds for the Swiss, and he was a set to the good, 6-2, in just 24 minutes.

But the second set began to show the real Cilic, and he quickly turned the tables. Federer had to save break points in the second game, but the Croat showed his own steely resolve to fight off the break for 2-1, in a nine and half minute battle. Federer threatened again in fifth game, Cilic again dug in, and again in ninth game. Then a love hold apiece took them to a tie-break.

And that game turned on a cracking return-of-serve winner from Cilic to level at 3-3, followed by another for 6-4. This time, Cilic went up for a smash and made a winner for the set, 7-6(5).

The momentum swung again in the third, with Federer responding to Cilic’s fire-power in kind, and one loose game from the Croat—offering up too many second serves—got the Swiss treatment and the break, with a huge ‘C’mon’.

Sure enough, it determined the set: A love hold from Federer, 6-3, in just 29 minutes. And the Rod Laver arena swirled with Swiss banners and chants as Federer’s fans sensed victory after a quick break in the fourth, 2-0.

With two hours on the clock, Federer cruised to a hold, 3-1, with a drop-shot winner. However, Cilic was about to take his tennis to another level. He was reading Federer’s wide serve and slapped it back for a winner, and a double fault from the Swiss brought up three break points.

Cilic broke to love, resisted a break-back point, and had Federer on the back foot and leaking errors in the eighth game to break again. Cilic served out the set, 6-3, and dominated the statistics, 13 winners to six. More significantly, Federer’s first serve was down to 36 percent. He was clearly feeling the pressure from the free-hitting Croat.

The opening of the final set was vital, then, especially when Federer immediately faced two break points. He angled a brilliant backhand wide to the line and survived: He had stopped the serving rot, just, and that seemed to lift a weight from his racket.

Federer broke in the second game, held to love for 4-1, and with the clock reaching three hours, broke one last time. The closing minutes then seemed to pass in slow motion, as Federer took longer to focus on each serve, paused for the shouts to subside, aced, and brought up three match points. One last ace would do it—and the arena erupted as he delivered it, only to be silenced, just as it had last year on match-point against Nadal, by a Hawkeye challenge.

But just like last year, Federer’s shot had clipped the line: He had won, 6-1.

The records, then, keep building for the seemingly ageless Federer.

Many will remember the tears Federer has shed after emotional victories and tough losses: when he won his first and only French Open in 2009, after winning both his first and his record eighth Wimbledon titles, but also almost a decade ago in this very place after a shattering loss to Nadal.

This time, he battled to keep the emotions under control again, going through the motions of thank-yous and congratulations, but uncharacteristically tripping over his words. He paused and, just as he had in Melbourne in 2009, said: “This is hard.”

Sure enough, the tears welled up, and he retreated from the microphone. And as the cheers continued to reverberate off the closed roof, he wept.

It is one of the qualities that makes Federer so beloved of fans and pundits alike: not just the aesthetics of his tennis, nor his bloody-minded fighting spirit, but the passion that lies just below the surface for this sport of his.

He afterwards tried to explain that emotion: “All day I was thinking, How would I feel if I won it, how would I feel if I lost it? I’m so close, yet so far. I think I was going through the whole match like this. I’ve had these moments in the past, but maybe never as extreme as tonight.”

So how long can he keep it up? How many more records can he break? Well he is again within touching distance of the No1 ranking, though Federer has big points to defend in Indian Wells and Miami, and is not currently scheduled to play in Dubai, where a final run could outpoint Nadal in Acapulco.

Federer may like the neatness of scoring 100 career titles: this one takes him to 96.

He may even like to give chase to the women’s—and all-time—Major records, though that looks a tall order. Steffi Graf has 22, Serena Williams 23, and she is set to return from maternity leave shortly, while Margaret Court has 24.

But in the end, it may simply be the joy of playing that keeps Federer coming back.