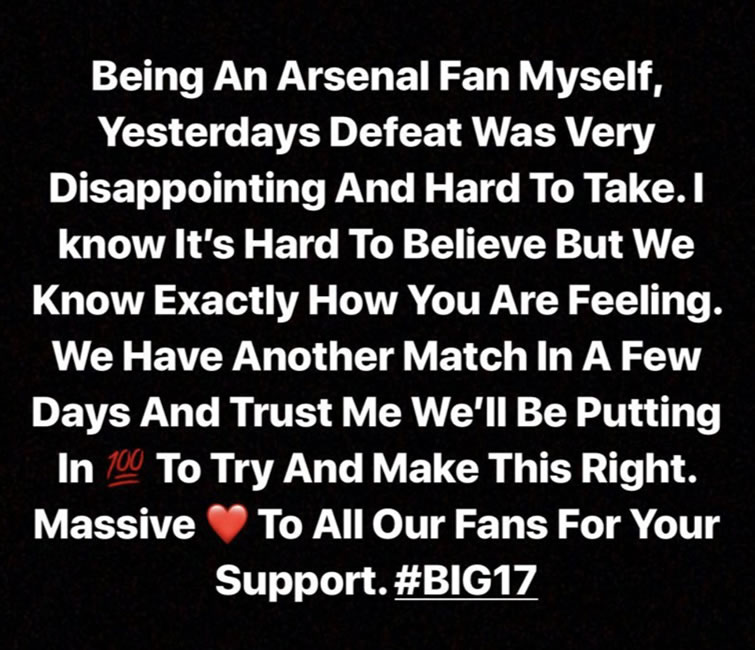 Alex Iwobi has taken to social media to issue a heartfelt apology to Arsenal fans after their 1-0 loss to Tottenham in the Premier League on Saturday.

The Gunners played well in the first half but Spurs grew into the game after the break and Harry Kane ended up scoring the eventual winner soon after half-time.

Iwobi was a second-half substitute at Wembley but he was unable to help his side conjure an equalising goal against the Lilywhites.

And the Nigeria international took it upon himself to take to social media and reveal his disappointment at the result on Sunday.

He wrote: “Being an Arsenal fan myself, yesterday’s defeat was very disappointing and hard to take. I know it’s hard to believe, but we know exactly how you are feeling.

“We have another match in a few days and trust me, we’ll be putting in [100%] to try and make this right.

The north London side will now look to get back to winning ways when they take on Swedish side Ostersund in the first leg of their Europa League last 32 clash on Thursday night.

Arsenal are now facing a serious uphill struggle to break into the top four this season and they currently find themselves seven points behind Spurs.

That means that their best hope of qualifying for next season’s Champions League may be winning the Europa League this season.

Arsenal finished fifth in the table last season but won the FA Cup for the third time in four years.