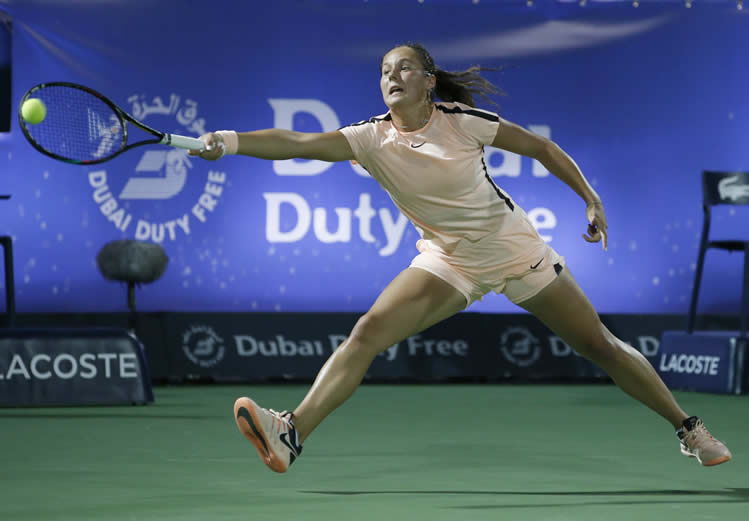 The young, bold, and apparently fearless 20-year-old Russian, Daria Kasatkina, captured the hearts of the Dubai Duty Free Tennis Championships fans yet again after her second gutsy comeback of the week to beat the No2 seed Garbine Muguruza.

The unseeded world No24 faced a tough draw from the very first in a high-quality tournament, beating former champion Agnieszka Radwanska in her opener, then coming back from a set and match points down against world No11 Johanna Konta, beating last year’s Indian Wells champion Elena Vesnina in the quarters, before surviving some quality power tennis from the reigning Wimbledon champion in a two-and-a-half-hour semi-final.

Kasatkina had lost both her previous matches to the 6ft Spaniard, though their marathon match last year in Australia was determined by a long final tie-break. And this match, too, would turn on what will surely be one of the tie-break games of the year.

Muguruza, aiming to reach her second final in as many weeks in this points-rich fortnight, got the early break, 4-2 and held to love for the set, 6-3.

Come the tight second set, it looked as though the Spaniard had made the key breakthrough in a 10-minute plus seventh game, breaking at the fifth attempt for 4-3. But Kasatkina bounced straight back to break to love, only to offer up six immediate break-back points in another marathon service game. Sure enough, the composed Muguruza took the lead, 5-4 and served for the match.

But still the second seed could not finish things off against the determined, all-court energy of the Russian. Muguruza double faulted for break point and then hit a backhand wide: 5-5. They headed to the tie-break.

It started inauspiciously for Kasatkina, a double fault, and she quickly faced 0-3. But her spirited tennis closed the gap, and it was she who earned the first set-point, 6-5.

Both produced a dazzling rally, Muguruza levelled, and then went on to hold match-point, 8-7, but now the Spaniard was struggling to contain her opponent, who four times had set points before finally serving it out, 7-6(11) after more than two hours of tennis.

What did the younger woman have left after spending much more time on court than Muguruza? Well, she clearly had plenty left in the tank and in the head, while the Spaniard seemed to lose her way.

Muguruza’s error count rose—she would reach 60 by the end of the match—while Kasatkina went for the lines, and hit them time and again. The Russian broke in the first game, held to love, and broke again for 4-1. Another love break, and she sealed her spot in the final, 6-1.

This will be Kasatkina’s third tour final, having reached two Premier finals—and winning Charleston—last year, but it is her first at the Premier 5 level, and she has now totted up wins over three top-10 players in as many weeks.

Not that things get any easier: Next she meets the defending champion and top seed, Elina Svitolina, who came through Angelique Kerber in the second semi-final.

Since the 23-year-old Svitolina rose to the higher ranks of the tour—and last year she won five tournaments, including not just Dubai but Rome and Toronto—she has moulded herself into a formidable match-player. Already, she had won the Brisbane title and made the quarters at the Australian Open this year, and she entered this semi-final knowing she had got the better of former No1 Kerber in their last four meetings. One of those was at the very same stage, on the same court, in Dubai last year.

Kerber, though, had looked impressive this week in Dubai, beating the No3 seed, Karolina Pliskova without facing a break point to make the semis. The German had also won 15 matches in 2018 for just two losses, and on top of that, went unbeaten in four singles and three doubles matches in the first week of the season at the Hopman Cup.

And thus far, Kerber had lost only 16 games in three matches in Dubai, and spent little more than three hours on court. That, though, counted for little as their head-to-head again came to the fore.

Neither woman could get a toe-hold early on, with five straight breaks of serve. Kerber hung tough in the fifth game for 10 minutes, which would prove pivotal. For Svitolina edged it, and got the first hold of the match, 4-2. She broke again for the set, 6-3.

The German got off to a better start in the second set, breaking to steal an early lead, 2-1, but was immediately broken back, broken again in sixth game, and Svitolina served out the match, 6-3, in under an hour and a half.

She said afterwards: “I’m happy that it was in two sets because before we had such tough battles. Physically, it was very tough. I was really pleased the way I was playing the tough moments… There were a couple of points that I was really happy the way I handled it.”

The final, then, will bring two energetic, highly-focused young women into opposition for the third time. Svitolina, who already has 10 titles to her name and three years more experience, has edged both previous meetings, but make no mistake: This third one will be close and unpredictable. Both women have come through tough challenges this week, and both have survived. All bets are off.