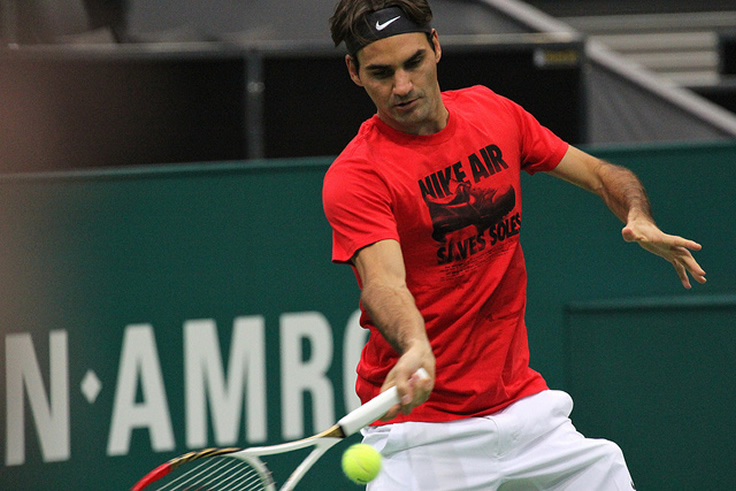 Roger Federer has been given a wild card for Rotterdam Photo: Marianne Bevis

For the first time in five years, Roger Federer has thrown his hat into the Rotterdam ring in what could yield him the No1 ranking.

Just two weeks after winning his 20th Major title at the Australian Open, and with only days until the singles draw is made for the 45th anniversary edition of the ABN AMRO World Tennis Tournament, the Swiss No2 surprised fans by accepting a last-minute wildcard—the A+ that each ATP500 tournament has available for a select group of players.

As he left Melbourne, Federer admitted that he would only make his scheduling decision for February after some recovery time at home in Switzerland. But because he has invariably played the Dubai Duty Free Championships in the last week of February, which is held in the city where he has a home and training base, Rotterdam has become a less frequent stop in his increasingly refined schedule.

However, with Federer no longer contracted to the Dubai tournament, and his ambitions for reclaiming the No1 ranking reignited by his Australian Open victory, he has rung the changes.

The Swiss last held the top spot on 4 October 2012, and when he set out on his title run in Australia just over a year ago, he was down at No17 after missing most of 2016 following knee surgery.

Now, he stands just 155 points short of Rafael Nadal, and could overtake his old rival if he reaches the semi-finals in Rotterdam, for Nadal is not scheduled to play until Acapulco, where he has final points to defend.

Federer launched his record-breaking No1 run at 14 years ago on 2 February 2004: his unbroken 237 weeks is the most by any man. And he went on to accumulate a record tally of 302 weeks. Now age 36, he would become the oldest No1 in the ATP rankings if he is successful in Rotterdam.

“The last 12 months have shown [Roger’s] tremendous drive. It makes perfect sense that he wants to capitalize on his current form. We are, of course, happy with this opportunity and see it as a crown on our 45th anniversary.”

Federer has previously played in Rotterdam eight times, taking the title in 2005 and 2012. Indeed, that first victory came at the expense of his current coach, Ivan Ljubicic.

The Swiss said of return to the Netherlands:

“The tournament is special for me. I remember playing for the first time in 1999 as it was one of the first events where I got the chance to play at the highest level.”

The then-teenager reached the quarter-finals in that first visit, and as a 19-year-old in 2001, he reached his first final there.

But Federer will have his work cut out if he is to reach the final weekend this year, for Rotterdam has attracted a high-calibre draw that includes 2015 champion Stan Wawrinka, defending champion Jo-Wilfried Tsonga, the World Tour Finals champion and No4 in the world, Grigor Dimitrov, No5 Alexander Zverev, and No7 David Goffin.

The 45th ABN AMRO World Tennis Tournament runs from Monday 12 February to Sunday 18 February at the Rotterdam Ahoy. Tickets for 2018 are available at the Box Office, via Ticketmaster.nl, and through all outlets.