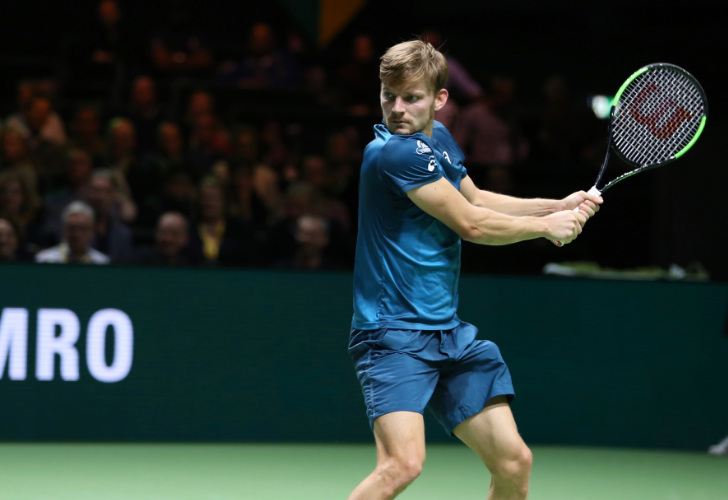 It was one of the most highly anticipated matches of the week, the semi-final between two of the most creative, quick, and popular players on the tour, world No5 Grigor Dimitrov and No7 David Goffin.

Their contest in the final of the World Tour Finals in London last November was one of the matches of the year, a two and a half hour victory in three sets to Dimitrov. And exactly a year ago, the two had another thriller in the quarter-final here in Rotterdam, with that two-and-a-quarter-hour three-setter going to Goffin.

Each had played great tennis to set this latest meeting, and the first set was as good as 50 or so minutes’ viewing as the fans could wish for.

It was fast, furious, full of net attack and remarkable running defence across the baseline. Dimitrov got the first break courtesy of a slightly slower start from the slender Belgian with the quicksilver footwork, and then held to go 4-1.

That scoreline did not reflect the tennis, and the Bulgarian had to fight off break points to hold for 5-2, and then dig even deeper against an assault of crisp, angled hitting from Goffin in the ninth game. Four break points and multiple deuces later, with Goffin passing up a break chance with a careless volley into the net, Dimitrov edged the set, 6-3.

Goffin was clearly warming up nicely, though, and swept the opening hold to love. But then disaster struck: the Belgian was again at the net, caught the ball on the frame of his racket, and it glanced straight into his left eye.

He fell to his knees, and Dimitrov raced round the net to his aid, though there was little he could do. Medics were called and Goffin headed off court. Minutes later, the announcement came: Goffin had been forced to retire.

It was at last year’s French Open that Goffin suffered another freak accident, when he slipped on the covers at the edge of the clay court, twisted his ankle, and was forced to bypass the entire grass season. Not until the US Open did he put together back-to-back wins as he recovered his fitness, and Goffin is a man who depends on speed, nimbleness, and super-fit movement. 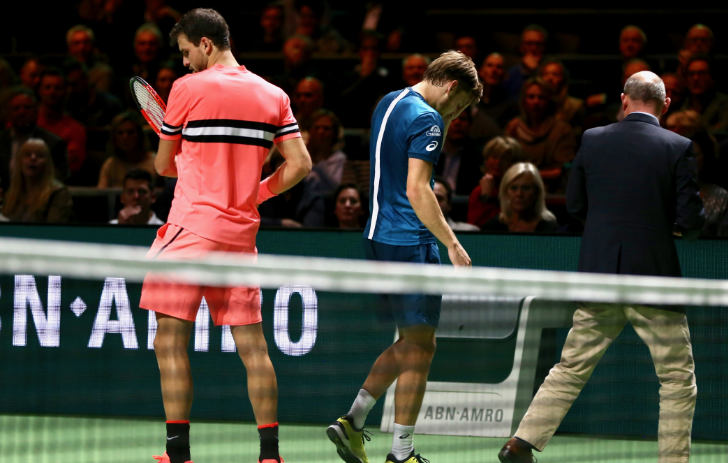 With his fitness restored, he built a head of steam through the Asian swing, winning in Shenzhen and Tokyo, making the semis in Basel and, of course, his biggest final to date in London where he scored a very rare double: He beat both Rafael Nadal and Roger Federer.

Dimitrov has been back on court for some extra work after each match this week: a very good indication that the shoulder problem that forced him out of Sofia last week has healed.

And after a semi finish in Brisbane and a quarter-final run at the Australian Open, he now heads into the first final of his season, and his first ever in Rotterdam, where he will meet either Federer or Andreas Seppi.

For the moment, though, his thoughts are with his opponent after he cut short the obligatory on-court interview.

“The most important thing is that David’s eye is OK… now I need to go and check out how he is.”

That done, and a couple of hours later, he reported that Goffin was already in hospital undergoing examinations:

“I saw him right after, a little bit of a shock how he felt. It was not pretty, what I was. But he’s in hospital right now, and we are just trying to help with whatever we can on site. That’s the priority right now, and I hope the exams and everything go well.”