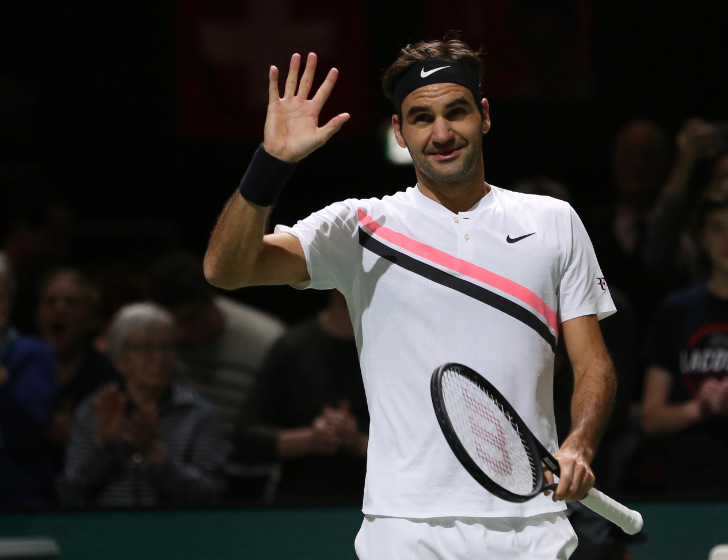 Its obituary has been written and filed for many years, but tennis’s most elegant shot, the one-handed backhand, refuses to die just yet.

For while the two-handed version of the backhand has come to dominate tennis through the last 50 years or so, the one-handed shot has continued to be burnished by an older generation of players, most of them now in their 30s.

They are players who took to tennis when the likes of Pete Sampras, Stefan Edberg, John McEnroe, and Boris Becker were at their peak, men who moved forward at the drop of a hat, and wielded that one-hander to such great effect around the net.

These players became the idols of those who followed, those who have kept the faith. And here in Rotterdam, seven of the 32 men in the main draw still use the single-hander as a weapon of choice.

The majority of them are indeed from the generation that was influenced by Sampras, Edberg and more.

Stan Wawrinka is a three-time Major champion, and boasts one of the most spectacular single-handed weapons in tennis, a full-blooded, open-chested pile-driver: a match-winner.

Nicolas Mahut has won doubles Majors, as has Feliciano Lopez, who won the singles title on the grass of Queen’s just last summer, and few surfaces profit the one-hander as much as the low-bouncing, skidding green stuff.

Richard Gasquet, rarely so happy as when playing on clay, plays with one of the most varied and flexible backhands, while Pablo Cuevas has six clay titles, all won with a one-hander.

But rather than sit on his laurels, content that his one-hander had served him well since winning his first Major in 2003, he has come back from a dip to No17 in the rankings following a six-month absence after knee surgery, with a rejigged one-hander, propelled by a bigger racket head, to deliver more power, more top-spin, more pace and variety.

Federer’s oh-so-elegant backhand was anyway a beauty of a shot, but his nemesis, the left-handed, double-handed, top-spin king, Rafael Nadal, thumped high and kicking above Federer’s left shoulder to great effect. Now, though, Federer had found an answer.

Of course nothing in this complex sport of tennis is ever quite that simple, as Federer explained after his first-round win in Rotterdam.

“I think before I got hurt, when I changed my racket in 2013/14, I started to swing through the backhand more… But I think my comeback is because I felt so good coming back—physically and mentally I was regrouped, refreshed. Having a major break for me was something so different and refreshing that I think it helped me a lot in my approach in matches, seeing things from a different angle after playing 17 years, it changed my mind-set a little bit.

“The backhand on top of it gave me a big boost, especially my Rafa match [at the 2017 Australian Open]. Really gave me the belief after that. You need reassurance, confirmation sometimes. That 5-setter with Rafa was the ultimate test for my backhand.”

Even before this recent evolution in the Federer backhand, a significant set of players was taking up the baton of the single-hander. Indeed three of the current top six men use the shot: Federer at No2, Grigor Dimitrov at No5, and Dominic Thiem at No6. Even more encouraging is that a clutch of young stars, the next but one generation, has also chosen to play with one hand.

Denis Shapovalov, just 18, is already ranked 47, and plays explosively from the left-handed wing, while the exciting young Greek, Stefanos Tsitsipas, age 19 and up to 82 this week, is a right-handed exponent. No surprise, perhaps, that both are admirers of Federer, but no less welcome for that.

Dimitrov, age 26, and a former Wimbledon junior champion, plays with one of the most extreme one-handed actions, with a bird-like sweep of the shoulders such that his arms almost meet behind him. It has taken him time to distil the many shots he has at his disposal into a winning formula, but last year he won his first Masters and then the ATP World Tour Finals, to attain a career-high No3 ranking. 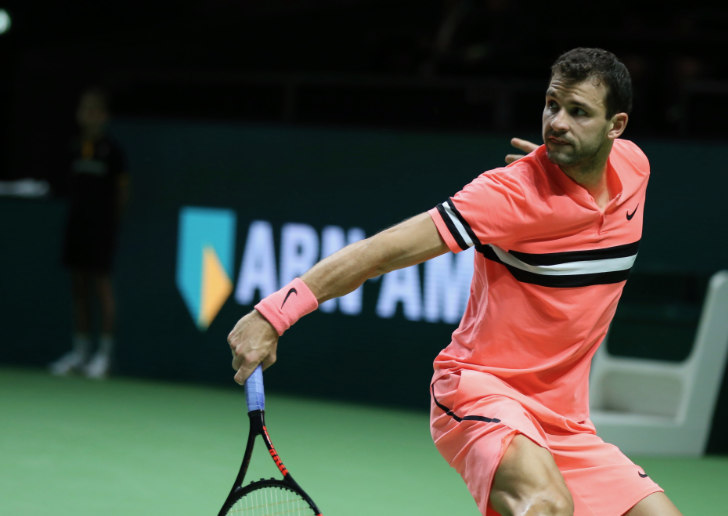 The only question mark in Rotterdam this year was the state of his shoulder: He bypassed the defence of his home title in Sofia. But he looked solid against the dangerous Japanese Yuichi Sugita in his opener here, and came through a tough test from the all-court attack of the 38-ranked Filip Krajinovic, 7-6(4), 7-5.

It was no easy matter, as the Bulgarian geed himself on, with encouragement from his box, to survive break points, before benefitting from a double fault on set-point from Krajinovic. The second set was just as tight, with just one break to take a 6-5 lead, and Dimitrov served out the match with a tally of 33 winners.

But fans of Dimitrov’s expansive backhand had another treat in store. Federer would face fellow one-hander Philipp Kohlschreiber for the 13th time, looking for his 13th win.

The slight German has one of the more subtle, elegant backhands, with slice and chips to die for. He is not the most powerful, but has wonderful timing on a good day—and this was a good day. And on such good days, on a fast surface like Halle’s grass—and he took Federer the distance in 2015—or Basel’s indoors—also a tough three-setter—he can seriously press the Swiss.

Both men were seeing the ball well, and skimming it over the net. Federer, as usual, attacked at every opportunity, but Kohlschreiber clearly determined to do the same. There was little between them through the whole first set, and even Federer’s 19/21 first serves could not prevent a tie-break. He had worked only one break point chance, on set point, and Kohlschreiber saved it.

The German then stole a march with a couple of outstanding backhand winners, 5-2. Federer closed for 4-5 but Kohlschreiber raced to the net for a volley winner and set point, 6-4. Federer then took three points on the bounce to earn his own set point, but still could not seal the deal—for another five points. However, the German blinked, and Federer grabbed the final point, 7-6(8).

The second set was almost as tight, with Federer unable to convert break points in the third game. He was looking unhappy, slipped a couple of times, muttered about the rowdy—and well-oiled—crowd, but his serving continued to hold up well.

The Swiss did not face a single break point, but were it not for two untimely double faults from Kohlschreiber, he would not have broken either. He at last served for set and match, 7-5, after an hour and 41 minutes.

He was into press very quickly, still in shorts, but upbeat and beaming:

“Yes, it was complicated. I had a good game plan, I thought, but was never really able to pull it off. I think it was based on Philipp coming out and feeling good right away. Maybe the double faults hurt him at the end.

“I had to fight, to grind, and I’m very happy I was able to come through, because these are the key matches in my career, I believe, when you’re not playing your best to somehow find a way.”

But it was good to watch two fine exponents of the one-handed backhand digging in, testing and probing with slice, angles, and net attacks, but able to switch direction for an acute pass cross-court or down the line.

Federer said during his title run in Shanghai last October that he would probably teach his own children to play with a double-hander:

“I think it’s just easier. You can always fight a wrong position. On the return it’s the same thing. You might have a little bit less reach, but you can also let go and still reach it. I think a double-hander is the way to go, but I hope it’s not a dying breed… I think it just looks nice, a one-handed backhand. It’s nice to see Denis keeping that alive, and same with Thiem and young guys coming up. But I think we will always be outnumbered from this point moving forward.”

Outnumbered it may be. And although Federer may now be one game away from reclaiming the No1 ranking, he will not be plying his elegant trade for ever. His legacy, though, is still there to see in these few younger men. That obituary for the one-handed backhand will have to stay locked away for a little longer.