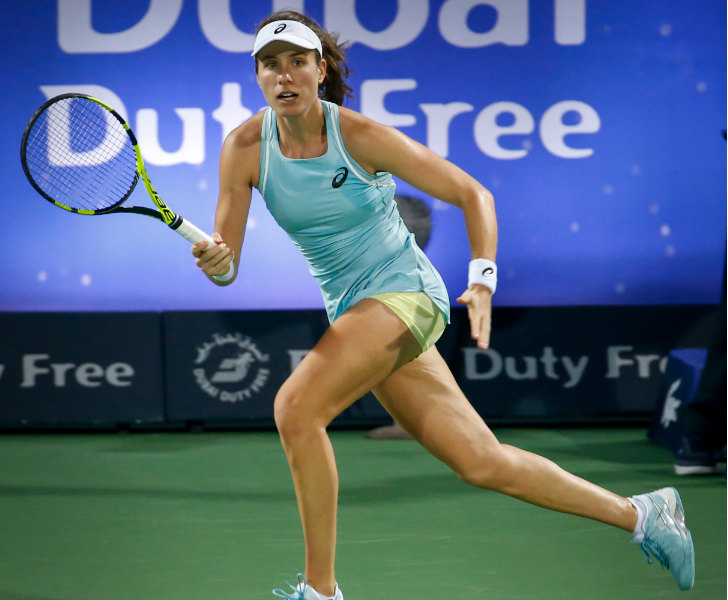 The host nation Japan narrowly defeated the GB Fed Cup team 3-2 to seal promotion to the World Group II in 2019.

Going into the second day of competition, the teams were all square 1-1, after Johanna Konta beat Kurumi Nara, but Heather Watson lost to Naomi Osaka, both in straight sets.

In the reverse singles, Konta played one of her best matches of the season to beat Osaka 6-3, 6-3. The Briton won four games in a row from 2-3 down in the first set, held from 15-40 at 2-2 in the second, saving the only break points she faced in the match, and broke in the next game. Konta then held on impressively to claim the match after 75 minutes.

But Watson, despite chances in the fourth rubber, lost to Nara 7-6(7), 6-4. Watson initially seemed in control, breaking twice from 2-3 to lead 5-3, but failed to serve out the set in the ninth game. She held for 6-5, and missed three consecutive set points in the tiebreak before conceding it 9-7 after 64 minutes.

In the second set, Watson did well to recover from 0-3 to 3-3 and then had to break back again for 4-5, but dropped serve once more to take the tie to the deciding doubles rubber.

Captain Anne Keothavong switched Konta and Watson into play in place of Anna Smith and Gabi Taylor, and it looked for significant stretches as though it had been a match-winning decision against the Japanese combination of Miya Kato and Makoto Ninomiya.

In a match if swinging momentums, GB pulled back an initial 0-2 deficit in the first set to win five games in a row, and went on to hold for the lead, 6-3.

The momentum swung back to Japan in the second set as Konta and Watson lost their way to go 0-5 down, but then clicked again to close the gap. It was too late to save the set, 6-4, but gave them a boost as they entered the decider. Konta fended off four break points in the fifth game to keep the nations on level terms, but Watson, playing in her 31st tie, could not do the same in the seventh.

With the winning line in sight, the Japanese team did not drop another game, breaking Konta to go 6-3, and inflict bitter disappointment on the Britons.

This was the fourth time in seven years that GB, following the brutal round-robin qualification process, had advanced to the World Group II Play-Offs: They lost to Sweden in 2012, Argentina in 2013, Romania in 2017—and now Japan.

So the 25-year wait for a return to the World Group continues, as does the equally long wait to play with a home tie.

“Right now, we are gutted about the result. One day our opportunity will come. If you keep knocking on the door, it will eventually open.

“It wasn’t to be this year, but who is to say it won’t be next year?… The Japanese players were definitely able to rise to the occasion with the home support. I dearly hope our team get that opportunity.

“I’m proud of the effort both Jo and Heather put in today in singles and doubles.”

Konta, who was taking part in her 19th Fed Cup tie, added:

“We have to recognise the effort we have put in the last two years getting out of the zone. People underestimate the task it is to get out of that Euro-Africa Zone group. Some of the best nations are in that group when you look at the depth of the other zonal groups around the world. I’m very proud of the fact we keep putting ourselves in this position.”

Rafael Nadal, master of Monte-Carlo, keeps the clay fire burning: ‘It’s not the moment to stop and disconnect your mind’