The eyes of the sporting world will be on Liverpool this weekend as the 2018 edition of the Grand National Steeplechase takes place.

An estimated 600 million people worldwide will be following the runners as they race over Becher’s Brook, The Chair and other famous obstacles at Aintree Racecourse.

Read on as we take a look at the race and try to point you in the direction of the winner.

Who is the favourite?

Blaklion and Tiger Roll are the current 10/1 favourites for the National, although history suggests it may pay to look elsewhere for the winner.

Only nine outright or joint favourites have won the race since 1946, while 14/1 has been the most successful staring price during that period with 10 victories. 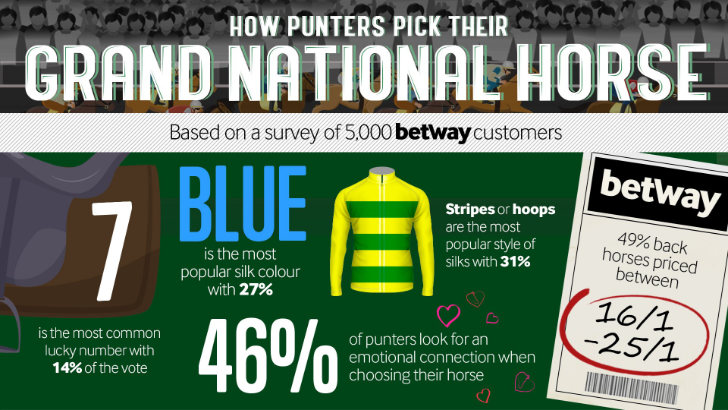 The Nigel Twiston-Davies trained Blaklion finished fourth in the race behind One For Arthur last year, but there are doubts about his stamina lasting out the marathon four-and-a-quarter mile distance.

Tiger Roll, trained by Gordon Elliott, romped to victory in the Cross Country Chase at Cheltenham back in March.

Elliott’s Cause of Causes finished second in the National last year having won the same race at Cheltenham, and with just 10stone 12lbs to carry Tiger Roll should put up a good showing at Aintree.

Who else is in the mix?

Elliott isn’t the only Irish trainer to have fancied runners for the National. Willie Mullins’ Total Recall has been in superb form this season, winning three out of four races.

The nine-year-old was just six lengths down in sixth place when falling at the third last in the Cheltenham Gold Cup. If that race hasn’t left a mark he will be a live contender this weekend.

Tony Martin’s Anibale Fly stayed on to take third in the Gold Cup and although stamina shouldn’t be a problem in the National he appeared to have a hard race at Cheltenham.

Mullins’ team also includes Pleasant Company who was going menacingly well when all but coming to a standstill with a mistake at Valentine’s Brook on the second circuit in 2017.

Nicky Henderson’s Gold Present appeals as one of the best of the outsiders for the race.

The champion trainer has never won the UK’s showpiece steeplechase and he has suffered nine-first fence departures in the National.

Gold Present was a faller in the Topham on the National course last year and if he has learned from that he could give punters a good run for their money.

Katie Walsh, sister of jockey Ruby, became the first female in Aintree history to make the frame in the National when third on Seabass in 2012, trained by her father Ted.

She rides Baie Des Iles this time around and there is a further family connection as the striking grey mare is trained by her husband Ross O’Sullivan.

The seven-year-old has already proved popular in the betting, with punters latching on to what could prove to be the perfect combination for the race.

Baie Des Iles has already finished in the first six in both the Irish and Welsh Grand Nationals, and is also a winner over 3m4f, so looks a decent each-way shout this weekend.

Baie Des Iles would undoubtedly be a fairytale winner for Katie Walsh, but Total Recall appears a good bet to give Willie Mullins his second National success 13 years after Hedgehunter won in 2005.

Total Recall is enjoying the best season of his career having been transferred to Mullins last summer.

His three wins this term included the Munster National and the Ladbrokes Trophy (formerly the Hennessy) before his Gold Cup mishap. This normally sound jumper is fancied to add another major race to his tally on Saturday.

Can you make predictions about casino games the same as sports?