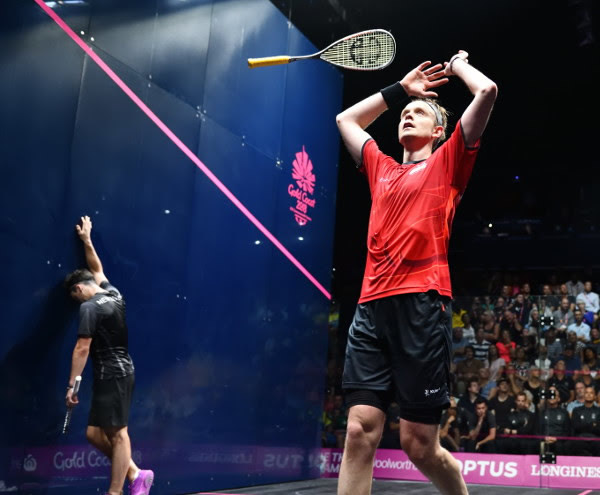 One of squash’s big men, in stature—he is 6ft 3ins and 88kgs—and in popularity, James Willstrop, has touched Commonwealth gold at last.

At last, because at the age of 34, the Gold Coast Games this year was his fourth, and he had won three silvers and a bronze in singles and doubles since his first Games in Melbourne in 2006. But back Down Under, he ended up on top of the singles podium.

Willstrop was briefly No1 at the start of 2012 after winning 15 matches in a row en route to the Hong Kong Open, the Kuwait Open and the Punj Lloyd PSA Masters, but lost it back to fellow Englishman Nick Matthew at the Tournament of Champions. Now he arrived in Australia ranked 15 in the world and seeded No4, after a succession of injuries over the intervening years hit his consistency and rankings.

But his squash in the Commonwealth Games this year showed just why he earned his nickname, ‘The Marksman’, as he took out seeds one after the other with his mix of power and finesse.

In the third round, he saw off No10 seed Campbell Grayson in four games and 70 minutes, and in the quarters, he beat No7 seed Cameron Pilley in a gruelling 95-minute contest.

With rival Matthew, the top seed, out at the same stage, Willstrop built went on to build momentum through the semis with a swift three-game win over the No12 seed, Nafiizwan Adnan, to become only the second player in the Games’ history to reach a third final—countryman Peter Nicol did it in 2006.

But now he faced the highest remaining seed, the super-fit 25-year-old New Zealander, Paul Coll. The first game was just as close as their cracking form suggested. It was fast, free-flowing squash underpinned by quality rallies and all-court energy.

At the sharp end of the opener, though, Willstrop edged the key points to take the game, 11-9. And if there had been any inhibitions in his play thus far, they were thrown off in the next two games.

The Englishman played his exciting brand of all-court squash, lived with the extended probing rallies down the backhand wall, and switched pace and direction at whim to test Coll’s nimble movement to the limit.

The Englishman made barely an error in taking the second game 11-4, and it was the same story in the third, and while Coll did close down a 5-0 deficit, he never managed to apply real pressure, and Willstrop raced to victory in just 47 minutes, 11-6, to take gold with gold-standard squash.

He told World Squash: “It just clicked for me today. It’s stuff you dream of. It’s one of the most brilliant performances I’ve had in my career. It just worked and it clicked—that happened today. I don’t know why, maybe the hours of solo practice I’ve put in on my own on court.”

He went on: “I love playing the game, and four years ago there were some doubts about that. And to think I’m now here with a gold medal in the singles. I can’t really process it, to be honest.”

Willstrop was not the only English player in contention for gold. Before the final two men took to court, Sarah-Jane Perry, playing in her first Commonwealth Games, took on another New Zealander, the No2 seed Joelle King—the highest ranked player in the tournament.

King had beaten Perry in all five previous meetings, including last December’s World Championships in Manchester. Again, the wiry New Zealander looked in great form and the more focused of the two. She turned around two game balls to snatch the opener 16-14 after a string of errors from Perry.

King took a 5-0 lead in an edgy fifth stop-start game. Time and again, there were appeals to the umpire and interruptions to mop the court, as Perry fought back to level at 8-8. But just when she looked in control, King upped her level to grab three straight points, match, and gold medal, 11-8.

The New Zealander won a doubles gold in 2010, but this was her, and her country’s, first singles gold, and she admitted:

“It’s a privilege, to be honest, to be the first one to do it and I’m just looking forward to celebrating with my team-mates.”

She is back first thing tomorrow to start all over again—in doubles.