England should progress at World Cup despite travel headache

England will take on Belgium, Tunisia and Panama in World Cup Group G next month 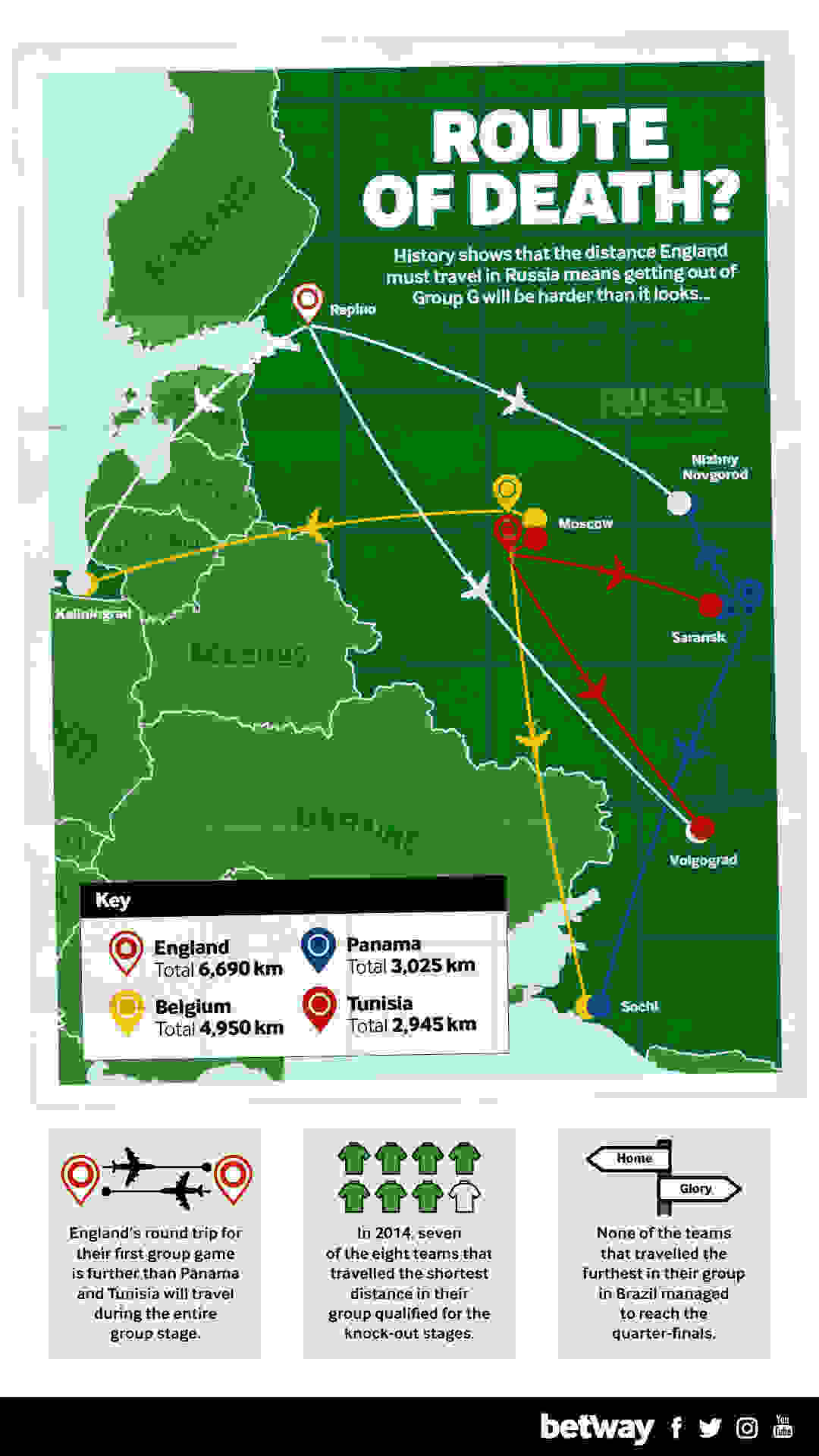 England’s record at major tournaments has been less than impressive in recent times, although hopes are high that this year’s World Cup offers an opportunity to put that right.

However, despite being drawn in a group alongside Belgium, Tunisia and Panama, could excessive travel prove to be England’s downfall this summer?

The Three Lions will be based in the northern town of Repino for the opening stage, meaning Gareth Southgate’s side face a 6,542km tour of Russia in the first round alone. That’s 1,253km further than the average round trip and history suggests that could be a big problem.

At the 2014 World Cup in Brazil, just five of the 13 teams that travelled further than the average distance in the group stage advanced to the knockout rounds. Of those, only Costa Rica made it to the quarter-finals.

Despite the amount of travelling involved, the draw handed England an excellent opportunity to progress to the last 16. Read on as we take a look at their Group G rivals.

Belgium are the favourites to win the group following an impressive qualifying campaign where they scored 43 goals. The likes of Kevin De Bruyne and Eden Hazard will be a handful for most teams and that could give them the edge over England. Romelu Lukaku will be under pressure to convert the opportunities created by that duo and that may work in England’s favour. Lukaku has been struggling with an injury and the Three Lions will fancy their chances of keeping him quiet when the two sides meet on June 28. Belgium boss Roberto Martinez usually adopts an attacking 3-4-3 formation and if England’s wing-backs can exploit the wide areas they could easily come out on top.

Tunisia topped their group during the final qualification stage in Africa, but they were pushed all the way by DR Congo. Recent friendly victories over Iran and Costa Rica means they head into the World Cup in a buoyant mood. The core of Tunisia’s team play their football in France’s first and second divisions and their star man is former Sunderland midfielder Wahbi Khazri. England ran out 2-0 winners when the two sides met at France 1998 and a similar outcome is expected in Russia.

Panama qualified for the World Cup after finishing ahead of Honduras and the United States in the final CONCACAF qualification round. This was a massive achievement for a nation that has never reached the finals before. They scored just nine goals in ten games during qualifying and it would be a surprise if they possess the firepower to trouble England. A recent 6-0 friendly defeat against Switzerland highlighted the difficulties Panama may face at World Cup level and their best hope of springing a surprise will probably come against Tunisia.