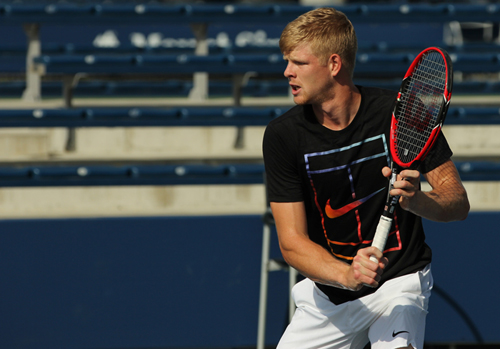 Kyle Edmund is in action in Paris Photo: Marianne Bevis

The main singles draws at the French Open this year do not feature many British players—four altogether—but the unfolding stories of the two men with a chance to make their mark were certainly noteworthy.

In the absence of Andy Murray, still away from competition following hip surgery after almost a year, a new name has become the British No1, and 23-year-old Kyle Edmund will hope to ride his success still higher in the coming weeks.

He began 2018, ranked No50, with wins over Denis Shapovalov and Hyeon Chung in Brisbane. Then he reached his first Major semi-final at the Australian Open, beating Kevin Anderson and Grigor Dimitrov along the way.

Through the spring, he overtook Murray, and arrived in Madrid at a career-high No22, where he made it past the third round of a Masters tournament for the first time.

What’s more, he had to it via Novak Djokovic and then David Goffin. He went on to beat Lucas Pouille in Rome, and so arrives in Paris seeded No16 and full of confidence.

He has third-round points to defend, but with a run to the second week, he is looking at still more progress up the ranks.

Meanwhile Murray woke up this Monday morning at 47 in the ranks and facing the prospect of slipping from the top 100 following the loss of his semi-points in Paris last year.

And that means that 22-year-old Norrie will become the new British No2 behind Edmund by the time the French Open is done and dusted.

It is all the more remarkable given that the young left-handed Briton has spent less than a year on the pro tour after finishing his college studies. His first main-tour matches were played on the home turf of Eastbourne, Queen’s and Wimbledon last summer with wild cards, and he went on to win three Challenger titles and then his first Major match at the US Open via qualifying.

And 2018 has seen still greater strides, beginning with an outstanding debut appearance in Davis Cup, his first main-tour foray on clay and producing a win over Roberto Bautista Agut from two sets down.

But still ranked outside the top 100, he kept up his efforts via qualifying rounds, and won his first ATP match of the year in Estoril—on clay—and against a not inconsiderable opponent, Robin Haase. It proved to be a launch-pad for European clay, as Norrie reached the semi-finals in Lyon in the run-up to Roland Garros.

A considerable boost, as it happens: He entered the main draw in Paris at a career-high 85 and with his first top-10 scalp in the shape of John Isner. Now he took on a more beatable opponent, Peter Gojowczyk, ranked 43 but also without a win at Roland Garros in a decade-long career.

However, the German had just reached his second final of the year in Geneva, a run of five matches, including wins over Fabio Fognini and David Ferrer—and that after a third-round run at the Rome Masters. In fact, No43 was a career-best. But it soon became clear that those matches in the run-up to Paris had left a toll.

The match began with a 15-stroke rally, won by Norrie, through a series of extended games. The Briton got an early break, too, and held again for 3-1. Another break in the sixth and Norrie was well on the way, and playing smart, attacking tennis to take the first set, 6-1.

He had made only two unforced errors to 14 winners, but Gojowczyk was looking less than spritely, and sure enough, the trainer was called for some attention to his hip.

And the match did not last much longer. Midway through the third game, Norrie thumped a forehand past a near-immobile Gojowczyk, and the German retired, with 41 minutes on the clock.

Norrie admitted afterwards that he was feeling ‘in the zone’, that he had rarely played any better—and that he wished he could have played the match out to its conclusion. After all, he pointed out, he had won his only other Major match via a retirement, too.

And he relished the prospect of taking on No15 seed Pouille and the vocal home crowd in the next round:

“Yeah, I love being the underdog and all the pressure is on him…

“And I’m sure I’ll be a little bit nervous. I’ll be on a big court. But I’m really looking forward to it, it’s just another great experience.”

As to his ranking, well he was still taking it all in—though ambitious for more:

And while that may not come in Paris—and beyond Pouille are possibly No2 Alexander Zverev, with Dominic Thiem in the quarters—watch out for the latest Brit on the block come the grass season. With around 20 points to defend, the only way, it seems, is up.

It will be Edmund’s turn to try and impress on Tuesday, assuming that the wayward, humid and storm-scattered weather over Paris does not intervene. His will be a tricky one, too, against the improving Australian teenager Alex de Minaur, though Edmund won their only previous match, in Estoril last month.