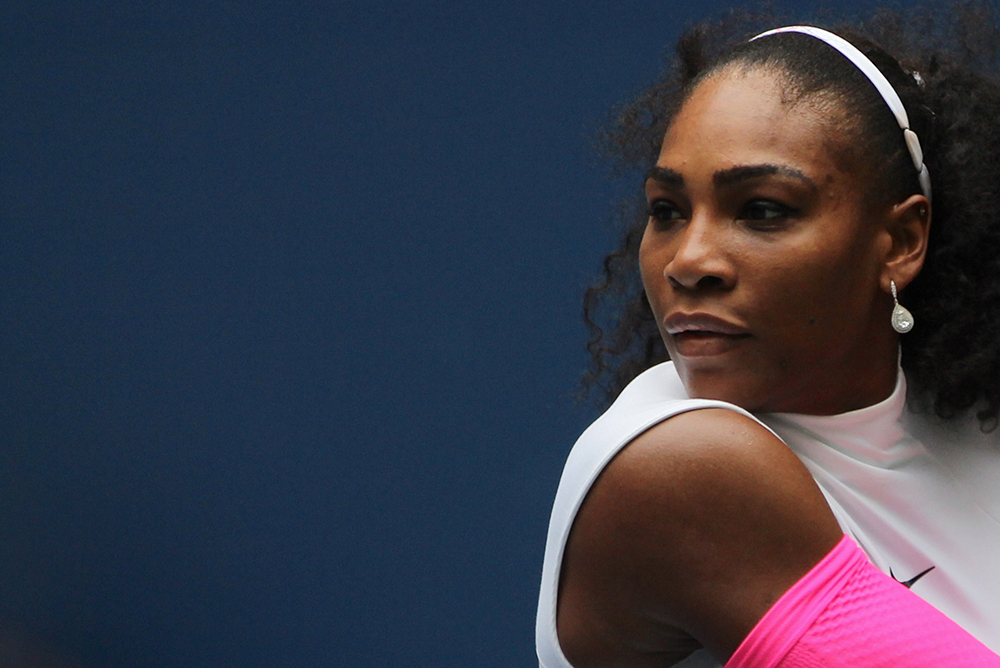 Serena Williams beat Karolina Plískova in round one Photo: The Sport Review

The last day of first round action at Roland Garros brought four of its former champions to court, yet two of them were not in the bold type that signifies a seeding.

And a search of the No3 seed’s quarter, that of 2016 winner Garbiñe Muguruza, revealed not just one other champion—her opening opponent was Svetlana Kuznetsova—but two formidable Major champions who had won all four Majors.

Two-time Roland Garros winner Maria Sharapova was in bold type but with an uncharacteristically low number by her name, 28. And she only managed that with her recent comeback to form in the semis of the Rome Premier last week.

It was her first appearance in Roland Garros since 2015: a doping ban precluded her in 2016, and then she was denied a wild card into the draw last year as she worked her way back up the rankings. Tough times for the woman who had been champion, runner-up, then champion from 2012 to 2014. And a tough draw did her no favours this year either.

For in the same eighth was the most formidable champion of all, the 23-time Major singles champion and three-time French Open champion, Serena Williams.

She, too, was absent last year, having been runner up in 2016 and champion the year before. Indeed this would be her first Major since the Australian Open last January: Then, she was already pregnant, and gave birth to her daughter in September.

Complications after the birth delayed her return—though she was still back in training very soon—and did not play until Indian Wells in early March. A third-round loss to sister Venus was followed by a first-round exit in Miami—and she pulled out of the main clay tournaments in the run-up to the French Open.

However, with an early arrival in Paris, her fitness was returning—and this is a city she loves, where she began to learn the language long ago—and what is more, this would mark the 20th anniversary of her first appearance at Roland Garros.

Williams was ranked No27, 16 years old, and it was only her second ever clay-court tournament. Now she was ranked 451, and although a protected ranking allowed her direct entry to the main draw, it did not entitle her to a seeding.

So she played unseeded in a Major for the first time since the Australian Open in 2007—which she won. Did she believe she could win here again, of was it, one journalist later asked, the thrill of competing that drove her?

“I mean, I’m definitely here to compete and do the best that I can do, obviously. I’m not putting any pressure on myself, as I normally do. [But] I think deep down we all know the answer to that.”

That she was then drawn into such a dangerous quarter, not just with seeded Sharapova and Muguruza but world No6 Karolina Pliskova and dangerous non-seeds Lucie Safarova and Dominika Cibulkova, must have rubbed salt into the wound.

But here she was, with just four matches and two wins under her belt in 18 months, playing her first clay tournament since she was here in 2016, and facing the twin sister of Pliskova, Kristyna.

And what a statement entrance: clad head to toe in a black lycra body suit, a scarlet band around her waist, ready to take on the world. Indeed she likened her decision to wear the bold catsuit as akin to feeling like a warrior:

It took her a while to warm up, and Pliskova’s big-serving game did not help. But soon there were familiar signs, heavy forehands, and big serving from Williams, too: The match would end with 28 aces altogether.

It headed to a tie-break, with Williams working hard and breathing heavily, and Pliskova took a 3-0 lead. But she managed just one more point: Williams had the set, 7-6(4).

In the second set, there were breaks aplenty on both sides, but it was Serena who finally edged the advantage 4-3, looking more confident by the game as she chased down lobs, raced into the net to pick up drops, even slid to ground in her efforts. She raised her hands to the sky and grinned: She felt good, looked determined, and would win after an hour and 45 minutes, 6-4.

The tests for unseeded players in a Major draw come thick and fast, and Williams’ next contest is No17 seed Ashleigh Barty. But as Williams said straight afterwards, she was happy just to get one win here, though she talked about so much more in a long and relaxed press conference.

Yes she was, unusually for her, on time to meet the media:

“The biggest difference [since having a baby] is definitely I’m semi on time today, two minutes late, because I want to get home and see Olympia, because I have been here all day… usually we hang out all the time. If I’m not practicing, we’re hanging out.”

Yes, there were physical issues to consider since she became a mother:

“Well, first and foremost, you have to get your core back, which is hard, because it literally spreads when you have a baby. That’s difficult. And just coming back from the physical side of having a baby—[smiling] at my age—is never really easy.”

And no, it was no harder for her than any other mother:

“I’m really fortunate enough that I can plan my days and I can plan my career. I feel like most moms don’t have the opportunity that I do.”

Then the clincher, surely the fundamental reason for the chilled, happy Serena who chatted at length after what was, in career terms, an important stepping stone if she is to return to the top of her sport: perspective.

“I feel like a lot of people don’t talk about it. They talk about the baby and how happy they are. But it’s a lot that goes into it with the pregnancy and with giving birth and it’s called a miracle for a reason, and it’s very difficult sometimes to make it through. I really appreciate that a lot more now.”

Williams’ old rival, Sharapova, had a longer, tougher battle against Richel Hogenkamp, coming back from 0-3 down in the third set to win, 6-1, 4-6, 6-3. She too reminisced about her time away and the pleasure of being back at one of her most successful tournaments.

“Great to be back on a court that I have had great success at. I have always loved playing here. It’s been, from a young age, a Grand Slam that was very difficult for me to do well at physically, mentally. I overcame that. So to be back here and kind of relive those moments is very exciting.”

She next faces Donna Vekic, and beyond that, either Safarova or Karolina Pliskova.

Muguruza also advanced, and in good form, 7-6, 6-2, and will next play wild card Fiona Ferro. There were wins too for another former Major champion, Sam Stosur, and for Julia Goerges. Yes, make no mistake, this is a loaded quarter, that still boasts three French Open champions in the mix.

But on a rain-disrupted Tuesday in Paris, superwoman came to the rescue.