Birmingham 2018: Petra Kvitova beats Magdalena Rybarikova to make it two in a row

Petra Kvitova seals a 4-6, 6-1, 6-2, win over Magdalena Rybarikova at the Nature Valley Classic title in Birmingham 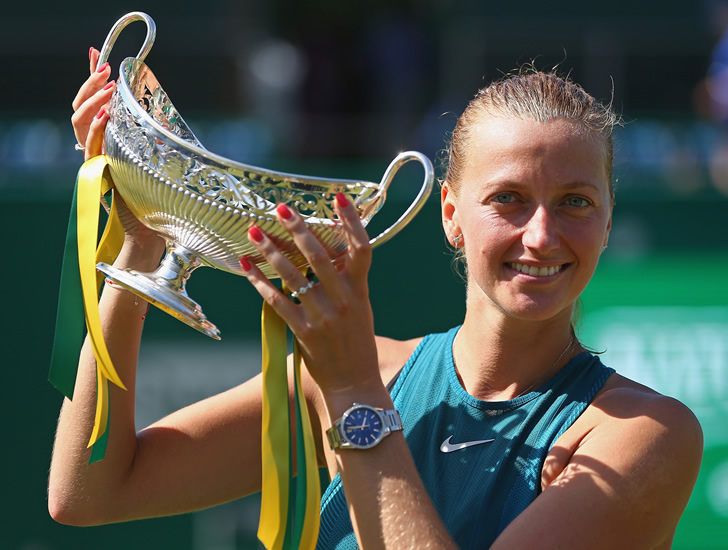 Petra Kvitova became the first player in 13 years to successfully defend the Nature Valley Classic title in Birmingham with a 4-6, 6-1, 6-2, win over Magdalena Rybarikova in a compelling final on Sunday at the Edgbaston Priory Club.

The victory is Kvitova’s fifth WTA title of 2018 and gives her the perfect preparation for Wimbledon, which starts on 2 July.

Kvitova is also scheduled to play in next week’s Nature Valley International in Eastbourne.

“I didn’t expect to come here and win the title.

“For me, I’m surprised. But on the other hand, I felt good on the court from the first rounds. Meeting Jo [Konta] in the first round wasn’t an easy draw. That match told me I could play well on the grass again. I was just keeping up the good performance on it. I think today was a great final to kind of fight. We played over two hours, so it was a great final to watch I think, I hope.”

Rybarikova started well, with Kvitova showing more nerves than the Slovak in the early stages. Rybarikova, herself a champion here in 2009, stormed to a first-set lead before Kvitova began to show her aggressive, big-hitting grass-court tennis.

Maria Sharapova is the last woman to successfully defend the title in Birmingham, having won in 2004 and 2005. Only three other players, Billie Jean King, Pam Shriver, and Lori McNeil, have lifted the famous Maud Watson Trophy in consecutive years.

“I think it was at the end a good match, maybe a cruel the result,” said Rybarikova.

“She’s a great player, amazing on grass. That’s why she won the tournament. She won so fast all the matches. I kept her longest in the match today.”

This year’s tournament enjoyed record sales, thanks to one of the strongest player draws in its history and a week of good weather.

The crowd was also treated to an exciting, high quality doubles final, with Australian Open champions Kristina Mladenovic and Timea Babos winning the title via a nail-biting match tie-breaker over Belgians Elise Mertens and Demi Schuurs.