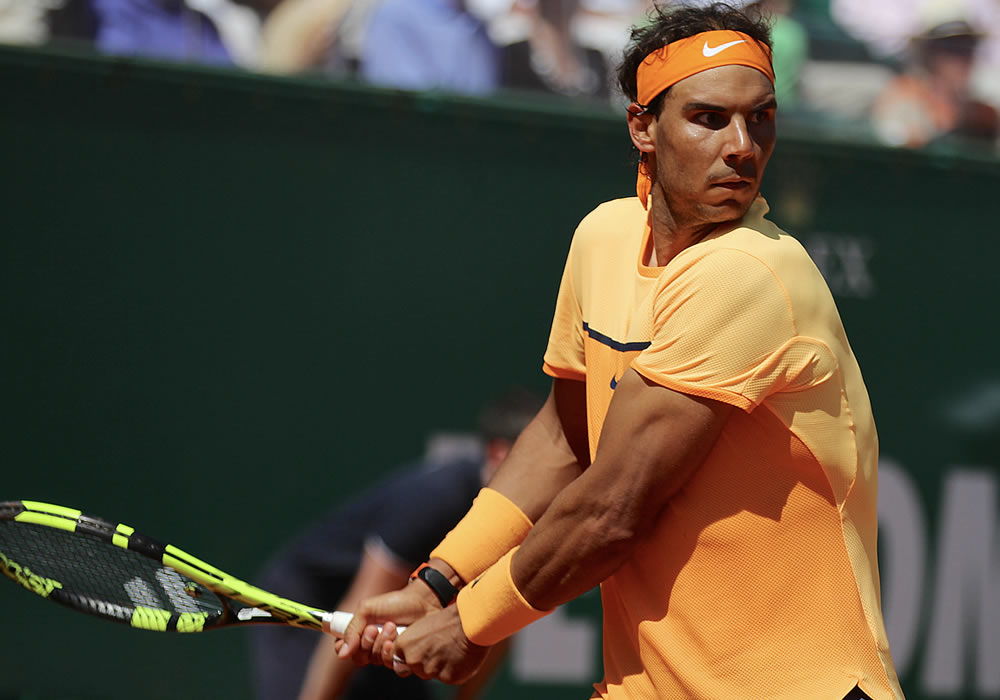 It was a schedule topped by 10-time and defending champion, world No1 and birthday boy Rafael Nadal, who turned 32 yesterday.

The Spaniard was bidding for his 12th quarter-final at the French Open, and his 34th Major quarter-final. He was also expected to claim his 900th match-win against the 22-year-old German ranked 70 and making his Roland Garros debut.

His match against Maximilian Marterer turned into a tougher and longer test than Nadal may have anticipated. After all, he had sailed through to the fourth round without dropping a set, and was hot favourite not just to win this match but the title come Sunday.

For a start, the German broke in the opening game to lead the mighty champion. The left-handed Marterer used his powerful forehand and plenty of tactical variety, but he could not convert break points in the fifth game, and Nadal turned the set around with a run of five games, 5-2, and served it out 6-3.

Nadal got an early jump in the second, too, 2-0, and broke again to take an imposing lead, 6-2. But again, he did not have it all his own way: the two men exchanged breaks in a third set that would be decided by a tie-breaker after 65 minutes, 7-6(4), and Nadal had that 900th win—but it had taken him two and a half hours.

But if Nadal’s was the headline men’s match of the day, it would be the opening match across the Roland Garros site on Suzanne Lenglen that began as a slow burn and turned into the match of the day, almost four hours and five sets. And the winner played for the dubious benefit of playing Nadal in the quarter-finals.

The towering No6 seed Kevin Anderson carried a 2-0 advantage over No11 Diego Schwartzman—and well over a foot in height. And both men were aiming to reach the French Open quarter-finals for the first time.

The small Argentine, a proficient clay player and one of most improved men over the last year, had yet to drop a set, even against the dangerous Borna Coric. Now the man who had won the Rio Open would mount one of the comebacks of the tournament, twice breaking as one of the best servers in the game served for the match, 4-5 in the third and fourth sets.

Anderson was entirely dominant in the early stages, taking the first two sets 6-1, 6-2, and the Argentine had never before come back from two sets down. But his turn-around, with the huge vocal support of the crowd, was dramatic.

The tall South African served for the third set, having saved break points along the way, but nerves seemed to take a hold and his forehand went awry. Schwartzman got the break, and went on to break again for the set, 7-5.

“I was a little bit upset because at the beginning of the match… I was thinking about my first three matches here, and I started the match with confidence. And then after one hour I was down 6-1, 6-2… Maybe that just helped me to be focused.

“After the second set I tried to start the third set… more aggressive, trying to play good points because he was dominating the match.”

The fourth set began with an exchange of breaks, and then Anderson broke again to work another chance to serve things out, but again Schwartzman found some crowd-pleasing plays—drops, lobs and crisp passes from the baseline—to take it to tiebreak. And the match turned firmly in his favour with a stunning run of seven straight points for the set, 7-6(0).

Now it was the Schwartzman serve that performed: He broke in the fifth and broke again, serving out to love with an ace—just his second in the match.

He looked stunned and happy in equal measure, and told the Suzanne Lenglen crowd:

“I really don’t know how I did it. I was really upset after first two sets, and Kevin was playing such good tennis. [But] I think the people helped me a lot. I am really happy now!”

Of course, now he faces the ultimate test on clay, Nadal, who has beaten him in all five previous meetings. He was honest about his prospects:

“Always I believe I can do. If it’s not, I am not playing tennis. I know it’s his second home, and it’s going to be a really tough match. I need to recover well, because against him I need to run a lot and do my best.”

The second quarter in this top half of the draw would then produce another turn-around five-setter, between No3 seed Marin Cilic and No18 Fabio Fognini.

The tall Croat raced to a lead, 6-4, 6-1, with Fognini looking weary and suffering from ankle pain. Was he about to retire? No, he took some tablets and continued, and just as he had against Kyle Edmund, he began to produce some of his finest tennis to grab the third and fourth sets, the latter in a gruelling tie-breaker.

But he could not complete a Schwartzman turnaround: Cilic, now a Masters as well as a Major champion, dug in to take a 5-3 lead and then broke again to take set and match, 6-3.