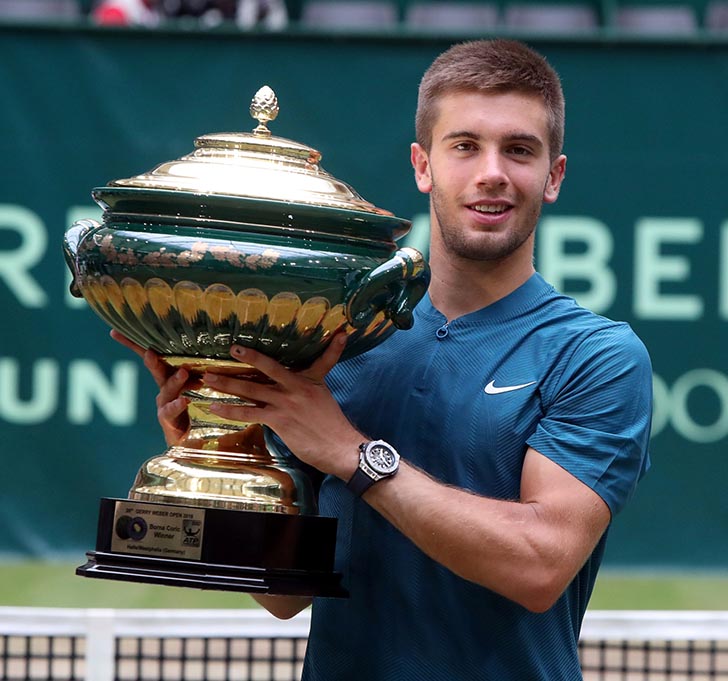 Taking the obvious measures—ranking, experience, past records on grass, indeed past records everywhere—the young Croat Borna Coric would not be given the best of odds of winning the title on the turf of the Gerry Weber Open.

On the other side of the net was nine-time champion Roger Federer, who had won more titles on grass than any other man, 18 of them, and was now in pursuit not just of No10 on the German grass but of his 99th title overall.

Federer regained the No1 ranking on his way to winning in Stuttgart last week, his 310th week at the top, and the oldest man to hold the position, and he had stacked up a 20-match winning run since winning on this very court last year.

But at 36 years old Federer had 15 more tennis years in his legs than Coric, and he had taken a rather more scenic route to this third meeting than the 21-year-old. He had fended off match-points in his three-setter against Benoit Paire, and had two testing matches against attacking players Matthew Ebden and Denis Kudla, each in the same score of 7-6, 7-5.

Even before his Kudla test, Federer admitted to feeling a little tired from his fortnight-long German journey:

“I felt like I had to push myself a little bit today in the match. It didn’t come as easy as maybe other days… I think once you reach the semis, I start seeing the light at the end of the tunnel… So, I think that allows me to find some extra energy now.”

Meanwhile, the talented Coric, twice a finalist while still a teenager and with his first title last year in Marrakech, had sailed through the second seed, Alexander Zverev, in his opener, beaten two fellow non seeds in straight-forward style, and then got a retirement after five games against Roberto Bautista Agut in the semis. What is more, he had not played since losing in the third round of Roland Garros. So one thing he was not was tired.

There was another factor: In a good run on this year’s hard courts, Coric had reached his first Masters semi-final, in Indian Wells, where he pressed Federer to the limit, 7-5, 4-2 up, and then a break up in the third set as well. It showcased just how strong and pugnacious a contender Coric has become, and he was now set to reach a career-high ranking ahead of Wimbledon.

He opened confidently, heading to the net twice to fend off a 0-30 deficit. Federer replied with equal confidence, a love hold with a mid-court swing volley winner.

But Coric’s time preparing on grass before the tournament was soon very evident. He headed to the net, ghosting in from his big serve and heavy, deep baseline strikes, keeping up the pressure on Federer: more than that, playing just as aggressively as the Swiss.

Federer was forced to pull off great volleys of his own, a high backhand smash at 0-30 in the eighth game, but he brought the best out of Coric in the 11th game, after working a break point with a slice right at the net-bound Croat’s feet. But the young man rose to the challenge through three deuces: It would got to a tie-break.

The odds there were in Federer’s favour: His record in tie-breaks was almost perfect in Halle, and when he went 5-3, and then 6-4, it looked like the same old story. Coric, though, was not put off. He continued to go for his shots, served superbly, pinned Federer to the extremes of the court, and levelled 6-6. One such drive deep to Federer’s backhand sealed the set, 7-6(6).

Federer edged the advantage in the second set, though, playing perhaps his best tennis of the tournament. He failed to convert an early break chance with a poor backhand error, and having worked another chance with two cross-court backhand winners, but again failed to break as Coric aced the hold, 3-3.

The young Croat was keeping pace with Federer at the net, 12/17 compared with 10-14, and both were firing far more winners than errors. But the Swiss had the edge in that department and worked two more break points in the eighth game. This time, he made no mistake, and he would serve out the set to love, 6-3.

Still Coric remained admirable in his energy and focus. He was certainly not deterred from his path, continued to attack, and got his reward in the sixth game of the decider. He produced wonderful depth, now with a forehand winner, now a backhand, and Federer could not contain him. Coric broke for 4-2 after a third failed challenge from Federer.

A confident hold to love—and Coric was serving at 95 percent in this set—left Federer serving to stay in the match, but even the Swiss man’s best efforts at the net could not hold off the onslaught. Federer looked heavy-legged as the match crept beyond two hours, and netted a volley for match point. Another volley error, and Coric broke for the victory, 6-2, and a thoroughly deserved one.

This may not have been prime Federer—though he still hit 43 winners to Coric’s 32. But the boldness, concentration and energy of the Coric game left the Swiss under constant pressure, unable to play with his usual freedom.

Was he a touch slower than usual? Perhaps, but he had been sailing close the wind all week, and Coric blew a storm of tennis in this final. It earned him his second title, and his biggest, along with proof that this young player is good enough to adapt to any surface.

And had he not had knee surgery 18 months ago, who knows where he would now be ranked. As it is, he will be at a career high of 21 tomorrow, seeded at Wimbledon, and a man that no-one will want to face on the grass of the All England Club.

The young Croat, a modest and courteous man, spoke emotional words to Federer:

“This is only my second speech, so give me some time please: It’s not very easy. Thank you, Roger… I was really watching you when I was 12 years old, but still it means a lot to me just to play against you. I do hope we can play one more time a final in the next weeks. Thank you.” 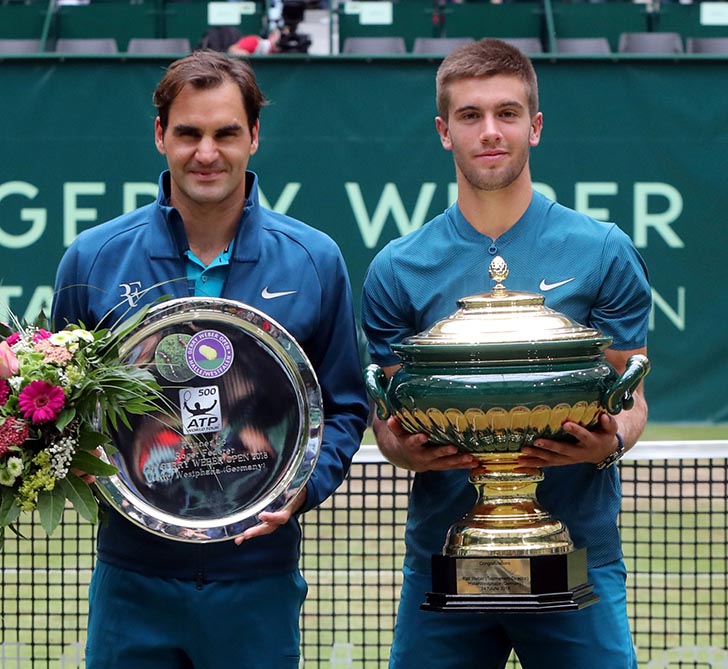 “Credit to him to play really, really quality tennis at the very end of that first set and then in the third as well. He never really dropped his level and that was it. So, it was an unfortunate match for me but credit to Borna to really come out and play a tough match today.”

Meanwhile, Federer, falling short of his title defence in Halle, will drop back to No2 in the world behind Rafael Nadal, but will still be most experts’ favourite to defend his title there. Until then, the tired and downcast Swiss will be looking for plenty of rest and recuperation.