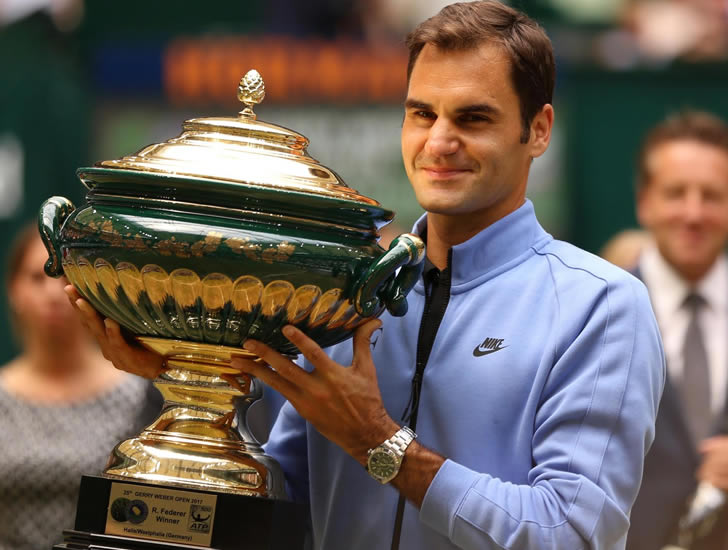 Roger Federer will begin his mission for a 10th title at the Gerry Weber Open against the No70-ranked Aljaz Bedene after heading 500km north from Stuttgart on Sunday where he plays the final of the Mercedes Cup.

The ATP500 tournament in the heart of Germany’s Westfalen countryside is one of two grass tournaments at this level in the lead-up to Wimbledon, and has been the event of choice for Federer since he first played as an 18-year-old in 2000.

It was almost a different era, one in which he played the likes of Michael Chang and Pat Rafter, yet Federer never fell short of the quarters even then, and did not lose a match between the start of his 2003 campaign and losing in the final in 2010—he missed playing only in 2007.

Now with nine titles, Federer has a 59-6 tally in Halle, and will not only be seeded No1 again this year but also ranked No1 in the world by the time he takes to court for his opener against Bedene. However, he will play the tournament knowing that he has to defend his title if he is to retain the No1 spot ahead of Wimbledon. Anything less, and he will once again switch places with Rafael Nadal.

Federer would face either Benoit Paire or Steve Johnson in the second round, with old friend Philipp Kohlschreiber lined up to be his first seed. The semis are scheduled to bring either No3 seed Dominic Theim or No5 seed Lucas Pouille.

Also in this half are in-form risers, including Marton Fucsovics, who won his first title in Geneva a month back to break into the top 50 for the first time.

Max Marterer, aged 23 and with home support, is at a career-high 50 after making the fourth round at the French Open, and he is in Thiem’s segment. Meanwhile, teenager Stefanos Tsitsipas, the exciting single-hander from Greece, has also broken new ground to reach No35 next week, after making the final of Barcelona, the semis in Estoril, and now the quarters in s-Hertogenbosch this week.

Germany’s brightest star, 21-year-old Alexander Zverev, is the No2 seed, and has only played three times before at the tournament. However, he made the finals in the last two years, even beating Federer in 2016 in the semis.

This time around, the world No3, who is now a three-time Masters champion, has a tough draw from the word go, opening against fellow 21-year-old, the highly talented Borna Coric. Twice the Croat has won their contests, but Zverev won in their only previous 2018 encounter on his way to the Miami Masters final.

Zverev could come up against former champion Florian Mayer or the in-form Richard Gasquet in the quarters. The Frenchman will play for the title in s-Hertogenbosch this weekend, but there will be plenty of sentimental support for German Mayer, who plays Halle for the last time with a wild card.

The elder Zverev brother, ranked 54, will take on the impressive young Russian Karen Khachanov, who reached the semis last year, in his opener, with Kei Nishikori lined up for the second round.

It would surprise few if the title was, as last year, contested by Federer and Zverev. And it would surprise few if Federer came out of Halle with No10 and No1 sewn up. But Zverev is without doubt the young pretender—and he has that 2016 win over Federer to his name. Make no mistake: he will be very keen to get that Halle feather in his cap.