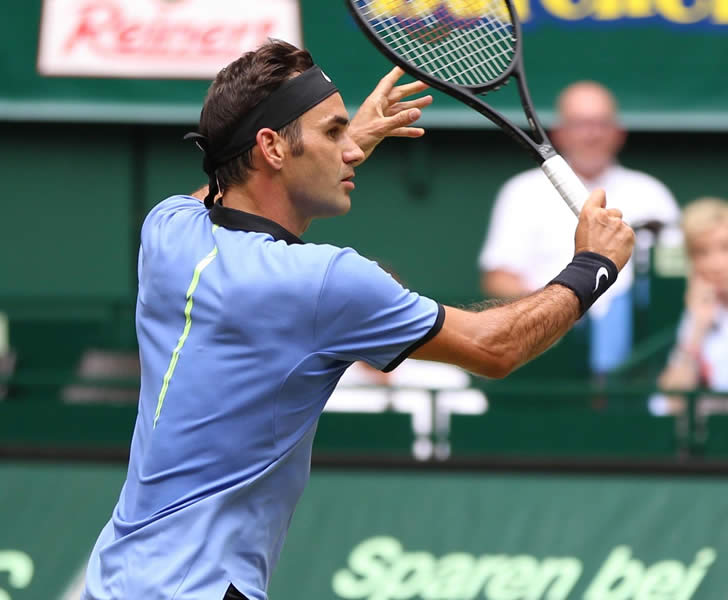 Just last week, Roger Federer reclaimed the No1 for the third time this year, and it was done in the most appropriate manner: By winning a title, and by playing on grass.

It came about with his first Stuttgart title. But then he headed to his title defence in Halle, and thence his title defence at Wimbledon. A fail at either, and he opened the door for Rafael Nadal to reclaim the No1 ranking again.

So how much weight did he give to holding onto that No1 ranking?

“I’m always excited for a challenge. So, I’m up for it. Also, I’m defending champion, so the goal by coming here to Halle is to try and defend, there’s no doubt about it. So, I think that’s going to take my mind off No1 a little bit.

“But at the same time I want to also enjoy this week as No1 because I don’t know whether I will ever be it again, or how long I can stay there. But a good step forward would always be to try and defend here… So, sure it is nice. I’d like to stay there.”

Rising to, or staying at, No1 is no new experience for Federer, of course. He holds the record for weeks at No1 already, 310, for most consecutive weeks at the top, 237, and for being the oldest No1: He will turn 37 in August.

But then winning and defending titles is no new experience either. Take Halle, where he is aiming to win his 10th title. He has now reached at least the semi-finals in his last 14 appearances, and should he beat his next opponent, Denis Kudla, he would reach his 12th final in the German tournament. Victory, and he would stretch his tally of titles to 99, so with perfect timing, he could target his century at Wimbledon.

But that was to race ahead of the remaining Halle draw. And very much like its sibling tournament in London, the Halle draw had lost many of its seeds early on. By the quarter-finals of both events, there remained only two seeds in contention, showing just how tricky the transition from clay to grass can be, especially after the packed schedule of back-to-back Masters and a Major on the red stuff.

In Halle, last year’s runner-up and No2 seed Alexander Zverev fell at the first hurdle, along with No5 seed Lucas Pouille, and No8 Richard Gasquet. In the second round, it was seeds Dominic Thiem, Kei Nishikori and Philipp Kohlschreiber.

And Federer, after his four-match test in Stuttgart, a drive home to Switzerland, and a flight back to Halle, was also showing some stresses and strains. His first match against Aljaz Bedene, was a straight-forward affair, but then the flair of Benoit Paire tested and probed Federer right the way to a concluding tie-breaker after two hours, 7-6(7).

The next day, Matthew Ebden serve and volleyed his way through a close contest, with Federer edging it, 7-6(2), 7-5.

And now he faced another attacking player who has clearly relished his time on grass in Halle. Denis Kudla, ranked 109, had come through qualifying and into the semis without dropping a set, nor even facing a tie-breaker. He had also squeezed in the Surbiton Challenger and three matches in Stuttgart.

Meanwhile, Federer admitted after his Ebden test that he was feeling the physical demands of several tough matches in little more than a week. He had, in Stuttgart, twice come back from a set down, notably in a thriller against Nick Kyrgios, who was continuing to test the very best at Queen’s Club.

“I felt like I had to push myself a little bit today in the match. It didn’t come as easy as maybe other days. Potentially, I also get a bit more frustrated I’m a bit more tired… I think once you reach the semis, I start seeing the light at the end of the tunnel… So, I think that allows me to find some extra energy now.

“I’m not incredibly tired, I just think I can push myself today, which tends to happen when you basically play for 12 straight days and you’re playing a lot of matches.”

And it would become another real test on an earlier and more chilly morning than usual. Federer broke in the second game, only to hand the break straight back, and from that point through to a tie-break, Kudla was serving very well, coming to the net, and slotting wrong-footing backhands like the best of them. Federer was off-balance and disgruntled in his return games, and while his own serve held up well, Kudla was also throwing in love holds with ease.

Come the tie-break, though, and Federer lifted his level several notches, rushed Kudla on return, and swept to the set, 7-6(1). Both men had made 14 winners, Kudla fewer errors, but come the moment, come the champion.

Federer would have to do the same in the second set, this time serving second and again he was unable to make inroads on the Kudla serve. The Swiss picked up a warning after thumping a ball out of the arena in frustration, and went on to face break points in the fourth game. He was let off the hook by a Kudla error, and finally held.

The errors continued to come from Federer’s racket, and Kudla began to go after some poor serves with great range, variety and changes in direction. It earned him three break points in the eighth game, 0-40, and three deuces, but a gritty Federer would not acquiesce: He aced to hold.

It looked for all the world as though this would head to another tie-break, but Kudla tightened just a tad—perhaps at last feeling all those matches in his body, too—and found himself facing deuce. Then it was break point, and Federer pounced.

Even the sun made a sudden appearance to help things along for the defending champion, who duly obliged by serving out the match, 7-5, after an hour and a half. Kudla had, in fact, made more winners, 29 to 26, and only one more error than his opponent—but when the going gets tough, as the saying goes, Federer came out with his 20th straight grass win, and into his 12th Gerry Weber Open final.

And that final, despite the exodus of seeds from the draw, will be a still bigger test for Federer, against one of the brightest talents among the new generation of players. Borna Coric, age just 21, already owns one title from three finals, is on his way back inside the top 30, and gave Federer cause for concern during their Indian Wells semi-final in March, when it took the Swiss 2hrs 20mins to come back from a set down.

Coric it was who beat Zverev, and was due to take on No4 seed Roberto Bautista Agut in the semis. However the Spaniard fell on his hip and was forced to retire at 3-2 up in the first set. One thing Coric will not be, then, is tired: Halle is his first tournament since Paris, and he has yet to drop a set.

However Federer was quick to dispel any concerns over this own form.

“No, very clearly no, there is nothing, and even if there was I was not going to tell you [laughing]. But I am very happy in my life, I’m very much at peace. Hitting a ball out of the stadium for me is like in practice happens every other day. So, this doesn’t happen very much on live TV but I actually think it’s quite funny, and it makes me smile on the inside—and it gives us something else to talk about rather than only talking about break points and stuff.”

But he went on:

“It’s a tough court. There is a lot of bad bounces here… [but] I was able to shake that off and just tell myself, ‘don’t get too mad.’ You know, it’s going to happen, it happened to him, too, I hit a return to the baseline, he can’t move to it… is he disappointed? Yes, he is. But he’s not going to show it—and I tried to do the same. So, no, I’m very happy. I just really want to do well, I really want to win.”

He has one more match to win if he is to claim his 10th in Halle, his 99th title overall, and extend his all-time record of grass titles to 19. It won’t be easy, but nor will it be a surprise if he ticks all the boxes again.