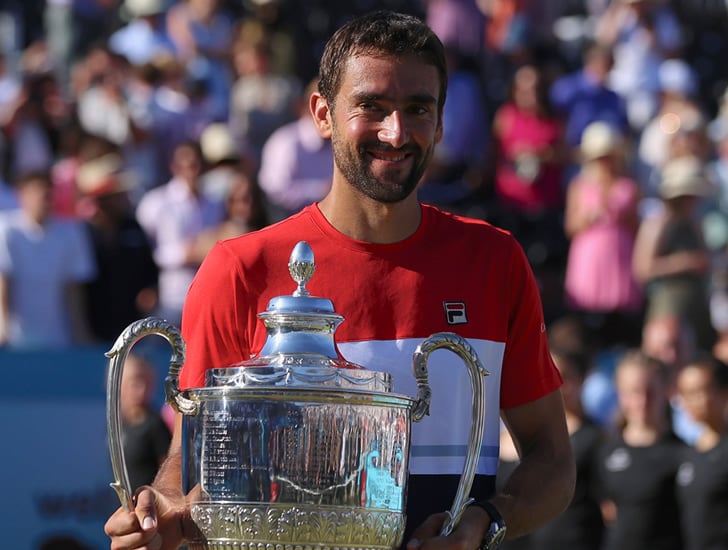 Emotions were sure to run high for both men in the final of the Fever-tree Championships.

Since last winning on London’s pristine Queen’s grass in 2012, a lot had happened in the career of Marin Cilic. The then-young Croat had gone on to win 17 titles, among them the US Open in 2014. He had picked up his first Masters title in 2016, made his first Wimbledon final last summer—where blisters wrecked his chances against Roger Federer—and then made the final in Australia this year to reach a career-high No3.

Even his clay credentials had built via a semi run in Rome and the quarters at Roland Garros. But while he had made three big finals in the last 12 months, Cilic had not won a title. His last, in fact, was on the clay of Istanbul last spring.

He was now playing in his 12th straight Queen’s tournament, into his fourth final here, and playing some of the best tennis of his career: Aggressive, focused, with exemplary serving: 45 of his 46 service games during the week, and 90 percent of points won on first serve.

His final opponent, Novak Djokovic, summed up the Croat’s form:

“We have played in Wimbledon, but he’s just a different player, I think. In last couple of years, he’s been in the form of his life and reaching his highest ranking in his career… He’s probably been playing the best that he’s ever played. Grass court suits him very well.”

He had played Cilic 15 times and won 14, including both Wimbledon meetings. Djokovic may have lost their last match, indoors at Paris Bercy 18 months ago, but the Serb had every reason to be optimistic.

Yet a lot of water had gone under Djokovic’s bridge since that Bercy match, too. The 12-time Major champion, former No1, and three-time Wimbledon champion had not made a final since he won the Eastbourne title a year ago. Since then, he had struggled with persistent elbow problems, did not play until the start of this year, and then aborted his return to have minor surgery.

He went on to lose in the first rounds of the Indian Wells and Miami Masters, but began to pick up his form and confidence—along with his old coaching team—through the clay season. He was desperately disappointed to lose in the quarters of the French Open, but that seemed only to sharpen his resolve ahead of the grass season.

Eager to build on his string of wins, and prepare for Wimbledon, he took a wild card into the Fever-Tree Championships, where he had played just three times before.

Since his last visit in 2010, when he won his solitary doubles title, Djokovic had often kept his transition between Roland Garros and Wimbledon low key, maybe playing an exhibition event but no tournaments.

Yet playing this year in London with a wild card, it was as though he had never been away. His quick footwork, his precision baseline striking, his clear tactics, and increasingly his willingness to move forward in the court, professed his fine grass-court skill.

Along the way, he beat No2 seed Grigor Dimitrov, scored his 800th match-win, and was now in his 99th career final.

And the desire of both to score this significant title, make a significant mark ahead of Wimbledon, was palpable.

Djokovic came under early pressure, saving a break point in the third game, and then proved just what a formidable shot his serve has become by working back from 0-40 in the seventh game and then saving two more break points with big-time baseline tennis.

Already, Cilic had cranked up 17 winners, and he looked impenetrable on serve despite a low first-serve percentage—until he came under pressure just as a tie-break looked inevitable.

Cilic recovered from 0-30, and went on to save two break points as a big forehand caught the line. But a double fault offered up another chance, and a netted backhand conceded the set to Djokovic, 7-5.

The two men continued to go toe-to-toe in the second set, both striking big and clean from the baseline, and defending for their lives in an increasingly high-quality match. Djokovic initially seemed to be weaving his web around the court, running Cilic ragged and earning two break chances in a long second game, but to no avail. Come the critical 10th game, and serving to save the match, Cilic netted a backhand to offer up match-point, but his serve came to the rescue. They would go to a tie-break.

Djokovic, who dropped only one point in 24 first serves in the set, opened a 4-1 lead, but little by little, Cilic worked back, six points in a row, the last a serve and big forehand winner, for the set, 7-6(4).

The match was two and a quarter hours old, but there was a long way to go, now with Cilic serving first, now into the region where fitness and stamina would be tested to the limit on a hot Sunday afternoon.

As the long set unfolded, Cilic looked increasingly confident, and his backhand in particular was penetrating the court at high speed. Djokovic faced deuce in the fourth game, faced break point in the sixth—saved in fact by a wrong ‘out’ call. But the writing was on the wall: Cilic seemed to have energy to spare, Djokovic’s concentration was flagging just a little—and that was enough come the eighth game.

A break point came and went, but a superb running forehand pass from Cilic brought up another, and Djokovic put a tired backhand into the net, 3-5. With the clock approaching three hours, Cilic thumped in a final love hold for the title, 6-3.

It had lived up to all expectations, a quality match boasting twice the winners to errors, but perhaps the difference was stamina, along with Cilic’s new-found willingness to attack the net: He made 18/25 there, Djokovic just 1/7.

A fine week for both players, in fact. Djokovic stressed:

“He deserved to win. It’s a tough loss for me today, obviously. But I have to see it from a positive side. I haven’t played a final at any event in almost a year, so this felt great.

“I’m really happy that I’m able to play this way coming up to Wimbledon. This is as big a tournament as it gets prior to Wimbledon, and I played finals and almost won. It’s a great result.”

He will return home for a couple of days before heading back to the practice courts in readiness for Wimbledon, back up to 17 in the ranks—perhaps higher when the seedings are announced in a few days’ time.

Cilic must now be one of the favourites at the All England Club—and remember, he was the runner-up there last year. And he will surely gather particular satisfaction from being the second Croat in a day to win one of the sibling ATP500 events. Young compatriot Borna Coric beat Federer in Halle to claim that title just hours before.

“Yeah, big week for Croats. Amazing win for Borna, beating Alex [Zverev] in the first round and going through the draw and then beating Roger, as well today. Amazing effort for him, first title on grass and first 500, so great week for Croatians.”

Birmingham 2018: Petra Kvitova beats Magdalena Rybarikova to make it two in a row