Nick Matthew, the three-time world squash champion and former No1, has decided to hang up his racquet for good 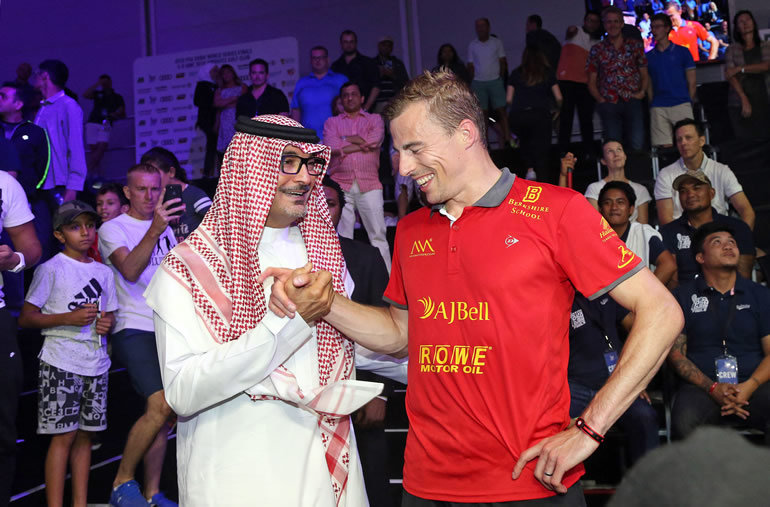 Nick Matthew, the three-time World and British Open squash champion, bowed out at the semi-final stage of the ATCO PSA Dubai World Series Finals this weekend, and out of his 20-year career at the top of his sport.

And in an emotional conclusion, the 37-year-old Matthew’s drew a 10-minute standing ovation from the appreciative crowd.

Matthew, born and still based in Sheffield, is the most successful male English squash player of all time, with 35 PSA World Tour titles together with three Commonwealth Games gold medals.

He looked to have played the last match of his career after defeat to Germany’s Raphael Kandra at last month’s Allam British Open, but a hamstring injury to World No3 Marwan El Shorbagy saw the Yorkshireman receive a late call-up to Dubai, and he put his retirement on hold for another week.

There, Matthew enjoyed something of a resurgence after three wins out of three in the group stages saw him top Group A, but current No2 Ali Farag, 11 years’ Matthew’s junior, had too much for the tenacious Englishman. The Egyptian took the first game 11-7 before wiping out a slender Matthew lead in the second to earn his place in the final of the tournament for the first time.

“It’s extremely emotional, I knew that if I was close to winning, they were going to be the last few points of Nick’s career.

“I didn’t want to talk about it at all because I think the more I talked about it the more it would have gotten into my head. Only such a legend would get a standing ovation for around 10 minutes.

“I always grew up watching Nick and looking up to him in every aspect of the sport. His professionalism, his will, his fighting spirit, his tactics, I even went to him at the British Open and said that he never stops amazing us and giving us more reasons to respect him.

“He’s had an unbelievable career and it’s his day today.”

“I dared to dream for a second that I could go all the way, but Ali was slightly too good tonight. Even a week ago, if you’d have offered me a semi-final place here I wouldn’t have believed it.

“A few people this week have been trying to talk me out of retirement but that’s not happening. I’m 100 percent going to stay in squash. I’m going to have a rest this summer, I’ve got some camps in the US, and I’ll have a lot of family time and regroup.

“I’ve got a great role which I’m looking forward to with England Squash and I’ll be growing my academy around the world. I’m still going to play, I’m not going to totally stop, I’m too competitive.”

Matthew spent 19 months as No1, beginning in June 2010, and was awarded the OBE in the Queen’s Birthday Honours list in 2015 for services to squash.

He launched the Nick Matthew Academy in February 2016, with the aim of coaching and nurturing the next generation of English squash players, and has created a pathway to help children go from beginners to elite players.