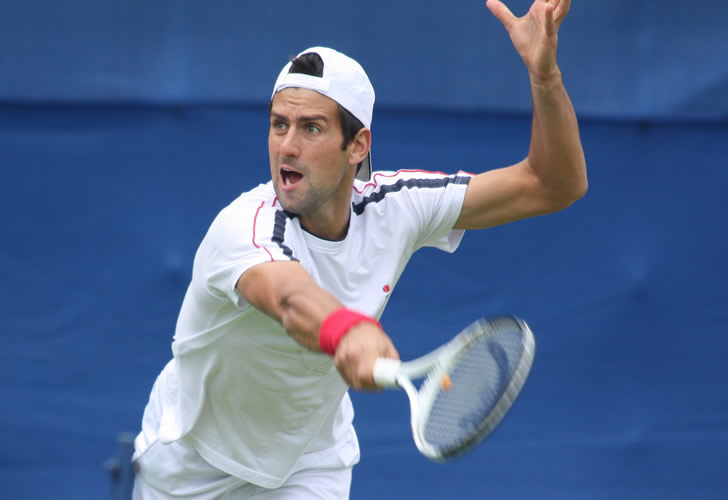 Twelve-time Major champion and former No1, Novak Djokovic, has taken a wild card into one of the most high-profile line-ups ever compiled at The Queen’s Club.

One of the most important grass tournaments in the run-up to Wimbledon, the newly-named Fever-Tree Championships also boasts world No1 and 2008 champion, Rafael Nadal, fresh from winning his 11th French Open title, fellow Queen’s champions, Nos 5 and 6 in the world, Marin Cilic and Grigor Dimitrov, plus world No4, Juan Martin del Potro.

Djokovic was runner-up to Nadal in that 2008 final, and last played at the tournament in 2010, when he won the doubles title alongside Jonathan Erlich.

He has, in recent years, opted for lighter preparation at one of the exhibition event that pepper the London region as the grass swing gets under way this week. Last year, however, Djokovic broke with tradition to play—and win—in Eastbourne.

In his last appearance, at a hastily-convened press conference at Roland Garros after his quarter-final loss to Marco Cecchinato, Djokovic cut a down-cast and disappointed figure who was unable to discuss his plans for the coming weeks.

There, he expressed uncertainty about his participation in the grass season:

So this is good news for fans of the Serb and of tennis, and the press release from the tournament reveals an upbeat Djokovic, too.

“I am very excited to be playing the Fever-Tree Championships again. I have happy memories of reaching the final at The Queen’s Club 10 years ago and also winning the doubles title.

“The atmosphere is always great and I am looking forward to playing in front of the British crowd again. After the exciting events in Rome and Paris, I’m ready for new challenges. Grass is very special, it is the rarest of surfaces, so I’m happy I’ll have the opportunity to compete at this strong tournament, which will also be a great preparation for Wimbledon.

He went on to confirm that the reunification with his long-standing coaching team, which temporarily disbanded a year ago, will continue in London:

“Marian Vajda and Gebhard Phil-Gritsch will be with me in London, and this makes me happy.”

Nadal signed up to the tournament months back, but that was before his extraordinary run through the two months of the clay season. It began with 11th titles Monte-Carlo and Barcelona, continued with an eighth title at the Rome Masters, and culminated in his 11th French Open victory on Sunday.

He admitted yesterday, after his record-making victory, that he would be assessing his condition over the coming days:

Nadal did, though, have an extended break earlier this year, not playing between the Australian Open and Monte-Carlo as he nursed a hip problem. The 32-year-old may, therefore, be in better shape than usual as he prepares for Wimbledon.

Five-time Queen’s champion and home favourite, Andy Murray, has not played a tournament since reaching the quarter-finals at Wimbledon last year, and before that he lost in the first round at Queen’s as he tried to manage a hip injury. He aborted attempts to return to the tour earlier this year, and last week withdrew from the ATP 250 in Rosmalen, which began today, to continue his preparation.

Murray is ranked 157 following his long absence, but Stan Wawrinka is now down at 263 after his own long-term absence and double knee surgery.

The Swiss has made tentative returns during 2018, but currently has a 4-7 win-loss run, and since reaching the semis at Queen’s in 2014, he has won just one match in three visits.

There will be great interest in the new top-ranked Briton, Kyle Edmund, who is at a career-high No18. He was knocked out in a tough three-setter in the first round last year by the charismatic teenager, Denis Shapovalov. The young Canadian’s star has also risen since last year: he will take part this year as 23 in the world.

There is also British interest in 22-year-old Cameron Norrie, up to 79 this week and given a wild card into the draw.

The strong top-20 line-up is completed by No8 Kevin Anderson, No9 David Goffin, No11 Diego Schwartzman, No13 Querrey, No14 Jack Sock, and No19 Tomas Berdych. Also in the mix is exciting Australian, Nick Kyrgios, playing in his first event since early April.

The Fever-Tree Championships still has two more wild cards remaining because Djokovic receives an A+ wild card—reserved for those players voted onto the ATP-500 premier player list at the start of every year.