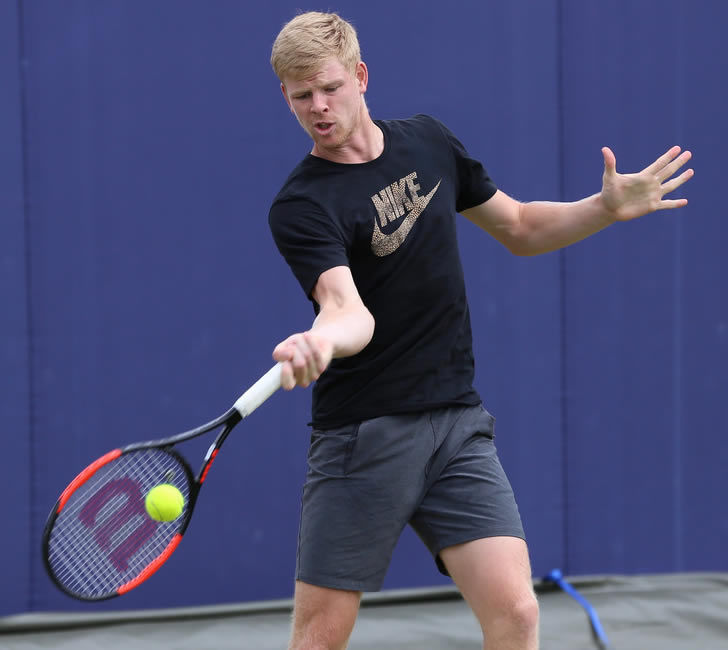 London’s Queen’s Club has not, perhaps, had the best of British tennis news this week despite a clutch of players featuring in the 32-man draw of the Fever-tree Championships.

The tournament began with five, and with some high hopes. The stand-out was, of course, five-time former champion, former No1, former Wimbledon and reigning Olympic champion, Andy Murray, and not simply because of his resume on grass. For he was making his comeback after an entire year away and hip surgery. It was a significant move for him and his legions of fans, and he was welcomed to centre court in appropriately heroic style.

That his lowly rank pitched him against fellow non-seed Nick Kyrgios in the first round did little to help his cause, and the young Australian battled past the gritty Murray in three testing sets.

Then there were three wild cards: for the fast-improving 22-year-old Cameron Norrie—up to 80 in the ranks—for Jay Clarke, just 19 and with some good runs on the Future circuit this season—and the returning Dan Evans. He of all the Britons had stood out on the grass so far, making the semis in Surbiton, and the final in Nottingham, despite little court-time since his year’s absence for cocaine use.

But in a draw where every seed is in the top 20, and the non-seeds included Stan Wawrinka, Novak Djokovic, Milos Raonic, as well as Murray, it was always going to be tough to get past the first round. Clarke drew Wawrinka, Norrie got former champion and No8 seed Sam Querrey, and Evans drew the tricky Adrian Mannarino, who only missed a seeding by a whisker, and whose game is suited to grass better than any surface. All three Britons lost.

But the top-ranked British man, at a career-high No17 and seeded No7 in London, was Kyle Edmund, a big man still only 23 years old but breaking new ground almost every month. He made his first Major semi-final in Australia, his first final in Marrakech, and then his first Masters quarter-final in Madrid. Along the way, he beat two top-10 opponents for the first time, plus Novak Djokovic.

Edmund was looking to make the quarters for the second time at Queen’s but he faced a real challenge—the same one that undid Murray. Kyrgios, also 23, and running into form after his own injury problems, showed flashes of his familiar brilliance against Murray, but also some wayward and lack-lustre tennis—and he afterwards admitted that he had struggled to stay focused against one of the men on tour he likes and respects the most.

There would be no such issues against Edmund, and there was no doubting Kyrgios’s grass quality: already he had pushed Federer to the limit in a final set tie-breaker in the Stuttgart semis, and showed all his prodigious flair with Lleyton Hewitt to beat the No3 seeds in doubles here.

The two men raced through the first eight games, barely 20 minutes, and with Kyrgios throwing down 134mph serves, first and second delivery. The Australian pounded to 5-4 with a love hold, two aces, and only around 10 seconds between serves—the game lasted under a minute. He then ambled to his seat, and chatted away to the ball girl delegated to stand to attention in front of him. She could barely control her giggles.

And where was Edmund in all this? Well he too was serving very well, dropped not one of his first deliveries—14/14—and kept his cool through the rushed pace of the match. He served his way to a tie-break with ease.

They had dropped just one point apiece on their first serves, and after Kyrgios took a 4-1 lead, Edmund served his way back to 4-3. It was not enough: Kyrgios served to 6-3, and then fired a backhand cross-court bullet to take the set, 7-6(3). The difference? Edmund had dropped two points on his first serve, 19/21, Kyrgios one, 20/21.

The Aussie called on the crowd for some noise, and got it, but not as much as he received for a net-approach tweener followed by a volley winner. All at once he had a break point, but Edmund rose to the challenge with a lunging volley winner and a fine backhand.

Kyrgios threw in another net-rush tweener, but this time lost the point to a forehand winner from Edmund. But a 137mph second serve secured the game, 1-1.

Still Kyrgios was near perfect, a love hold with a 17th ace in 51 seconds, 2-2. But Edmund too was spot on most of the time. They were averaging 125 and 124 mph respectively, and with an hour down, they had fitted in 20 games.

Kyrgios’s serving was, if anything, improving, another love hold, 4-4, and every time Edmund responded, but would face deuce courtesy of a misfired forehand, and then another, and a break point with a wayward backhand. He raced to the net to save it, and held the longest game of the match so far, 5-4.

There was a threat again for Edmund in the 11th game: a flying smash, a forehand net-cord, and he faced two break points. He held with a couple of fine slices, and it headed to another tie-break. This time, it was Edmund who got off to a strong lead, 4-0, first with a superb backhand pass, then a serve one-two. Kyrgios edged back to 5-5, but Edmund raced in to make a winner off a drop shot and served out the set, 7-6(5), after an hour and a half, and the Briton allowed himself a huge roar of satisfaction.

Remarkably, Kyrgios had still dropped only three points in 50 first serves, had 25 aces, but he would have to go to another three-setter.

Kyrgios opened in absurd style, hitting a tweener off a drop shot to make a winning lob. Edmund kept him under pressure, and pushed Kyrgios to deuce in the third game, as there were signs that the ease and power of the Aussie was slipping. He flexed his left hip—an ongoing problem—and if Edmund could maintain the pressure, he had a chance. But the need to get things done quickly only freed up Kyrgios, it seemed, and he broke courtesy of a couple of loose shots from the Briton, 3-1.

Edmund compensated with a great reactive touch volley to hold for 4-2, but a 31st ace from Kyrgios and it was 5-2. The Australian brought up match-point with a 138mph ace, but Edmund was not done yet, and Kyrgios grew livid with noise courtside as he served, and he faced break-back point.

The genius of Kyrgios saved it with a killer drop-shot that grounded Edmund, literally, at the net. Tense moments on both sides, but a final backhand winner down the line, and Kyrgios ended Edmund’s hopes, 6-3, to reach his first Queen’s quarter-final.

The Australian was asked his opinion on Edmund’s chances at Wimbledon:

“Massive, I think. I think he’s really good on grass. He serves well. His backhand has improved really a lot. He’s got a good forehand. He returns well. I think he can do well on the grass, for sure. I was pretty impressed with his grass court tennis today.”

But he was then asked about his own chances: How much of a threat could he be? The answer was short:

If he serves as big and as consistently as today, he is right—especially with so many other tools at his disposal. Fortunately for some, he will at least be seeded there: Edmund cannot meet him in the second round—though of course, Murray could.

Kyrgios will next play the defending champion, 36-year-old Feliciano Lopez, who battled past the No4 seed David Goffin in three sets in the first round. But he should be well rested after Raonic withdrew with a shoulder problem after himself facing an injured player to win by retirement.