Nick Kyrgios has, as always, been hard to miss at the Queen’s Club this week 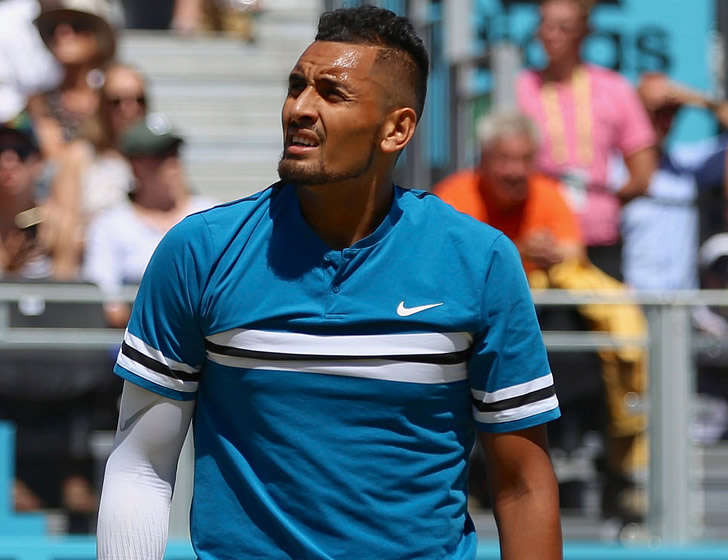 Nick Kyrgios has, as always, been hard to miss at the Queen’s Club this week.

The box-office 23-year-old was unseeded here after playing only three events since Australia in January, having been hit again by injury problems. He also arrived at the Club with three losses in three visits in the last three years.

But here is man with talent to spare, and he has needed all of it this last fortnight. He opened his grass campaign in Stuttgart, and faced against defending champion Roger Federer in the semis—and came within points of beating Federer before the Swiss sealed the third-set tie-breaker.

Kyrgios’s draw in London was, in some ways, even tougher. He drew home favourite and five-time champion Andy Murray, who was making his return to competition from hip surgery after a year away. The two men are also friends, and it would prove to be a tense tussle through 2hrs 40mins to a 7-5 third set conclusion

Then Kyrgios had to face another Brit, this time No7 seed Kyle Edmund, and that too would take three sets and two and a quarter hours, with Kyrgios edging it, helped not a little by a personal-best 32 aces in a three-set match.

Indeed the Aussie came into the quarter-final with a tournament-leading 50 aces, but his opponent was no mean server himself.

Defending champion Feliciano Lopez was trying to reach his fourth semi-final in 13 years at the Queen’s Club, and as usual, the 36-year-old left-hander looked perfectly at home on the slick turf.

Lopez thumped 11 aces past one of the best returners, No4 seed David Goffin, and was plying his fine grass-court trade with his usual panache: a leftie, serve-and-volley exponent in the old-school mould. It was a style that had earned him three quarter-finals at Wimbledon—and next week, he would overtake his old friend Federer to notch up the longest unbroken stretch at Majors with No66.

Only last week, Kyrgios beat Lopez in the quarter-finals of Stuttgart—another serve-fest of 20 and 13 respectively. The Aussie also beat the Spaniard in their previous meeting, Wimbledon back in 2016. But with those two long singles matches in his body, plus two doubles matches with Lleyton Hewitt, plus a sore hip, could Kyrgios continue his grass run?

As expected, there would be very little between them from start to finish. It went nip and tuck to a tie-break with 13 aces to Kyrgios and 12 to Lopez, and plenty of net chases and blistering winners off both wings. Lopez deployed killer slice to pull Kyrgios in, the Aussie threw in drops shots but, unlike his previous two matches, very little show-boating: This was head down, focused mode, and it needed to be.

Time and again, he would say ‘great serve’, or ‘great shot’ to his opponent, and the crowd lapped it up. Come the tiep-break, though, and Kyrgios edged the early lead, 4-1, and then 6-2, only for Lopez to close the gap to 6-5. But one last big serve and Kyrgios had the set, 7-6(5), having won just one point more than Lopez.

The big Spaniard looked more in control in the second set, serving first, and bringing up his first two break chances in the eighth game. But Kyrgios produced a second-serve ace, and then more superb deliveries to wipe out the 15-40 scoreline and hold.

Kyrgios aced again for 5-5, but Lopez seemed to be really getting his serve-and-volley rhythm. By the time he led 6-5, he had made 15 from 18 at the net, and then worked a set point. His statistics were outstanding, 16 winners for three errors in the set, but he could not grab the one vital point, and a 30th ace from Kyrgios took it to another tie-break.

The first point lasted 29 strokes, an exquisite exchange full of guile and variety—and it went to the younger man. As before, Kyrgios opened a lead, 5-2, and then 6-3. Perhaps appropriately it would take one more ace—his 32nd again—that won the match, 7-6(3).

He actually trailed Lopez by one point in the end, and the Spaniard had fine numbers: 36 winners to just 15 errors. The trouble was, Kyrgios’s ace tally took him to 41 winners, compared with only 18 errors.

It made for formidable reading and viewing, though Kyrgios will now play former champion and top seed Marin Cilic, in the semis.

And the Croat sealed his win over Sam Querrey with a 10th ace after just 78 minutes, 7-6(3), 6-2. He missed a chance to close out the first set on break point, and come the tie-break, it was business as usual, from 3-3, with a sweep of four points. He would then win twice as many point in the second set as Querrey, and did not offer a single break point in the match.

These tall men have not met in over two years, and have only played twice altogether, sharing the honours. It is a very tough one to call, for Cilic has been playing perhaps the best tennis of his career over the last 12 months, with two Major finals—including Wimbledon—a first clay Masters semi, and a career-high No3 ranking.

“He does everything really well. He serves well. He’s got an unbelievable backhand. His forehand is quite big. Moves pretty well for a big man. Returns well. I know it’s going to be very tough. I mean, he played Querrey today, and looked really, really good.”

That said, the Aussie star is undoubtedly feeling good on the grass. He put it thus:

“You know, I’m in a good place right now on the grass. I’m serving well. I feel good from the back. I want to just stay focused for this tournament… [But] I definitely feel like my preparation for Wimbledon maybe hasn’t been this good before. I have never won a round here. I have always gone into Wimbledon maybe a little bit underdone match-wise. I have played a lot of matches going into Wimbledon, which is maybe something that can help me going forward.”

He is not wrong. If he stays fit and is this focused, he will worry everyone he faces.